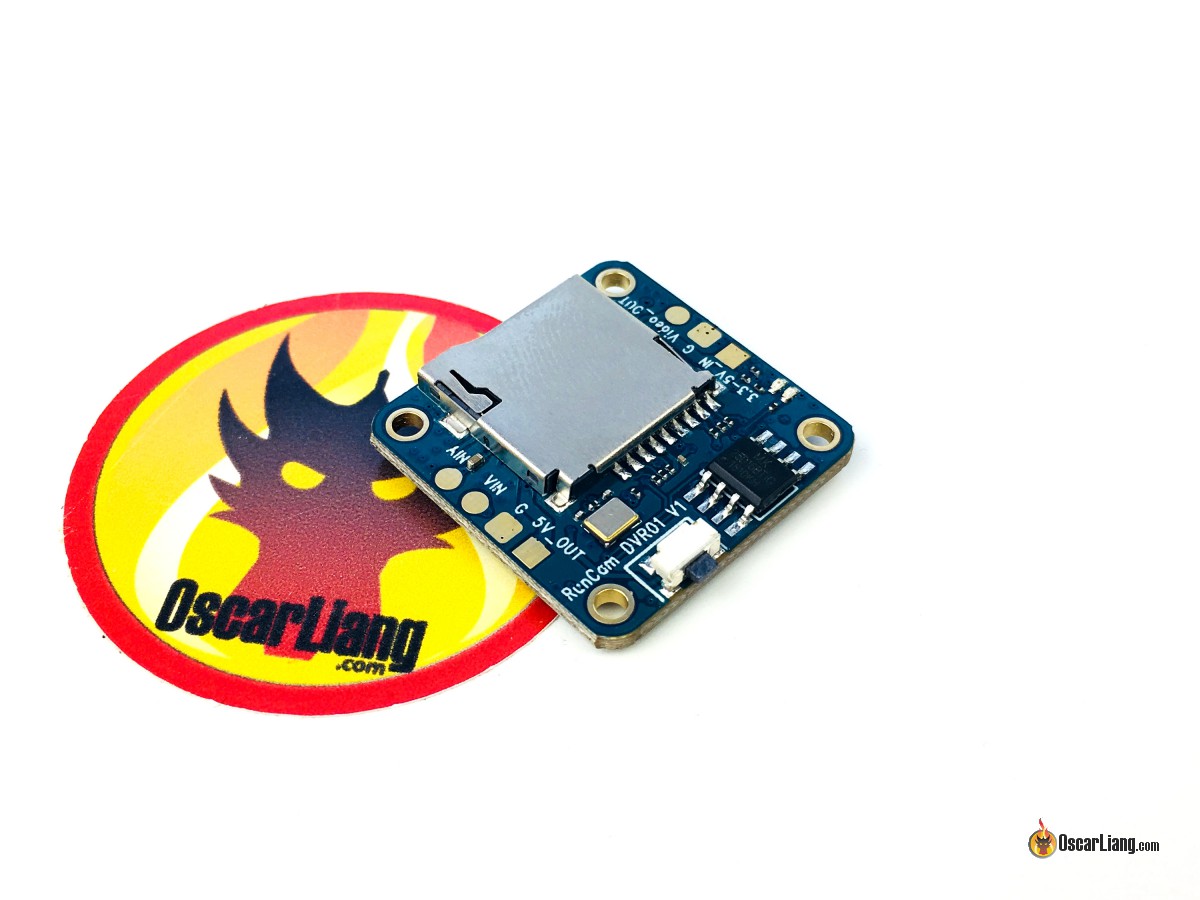 Onboard DVR allows you to record FPV video directly from the camera without video signal breakup and gives you the best possible footage.

I reviewed some DVR modules recently and was frustrated by the lack of options. So I talked to some manufacturers about creating a dedicated DVR you can install inside a quad, and here is what Runcam came up with, the Mini DVR board! 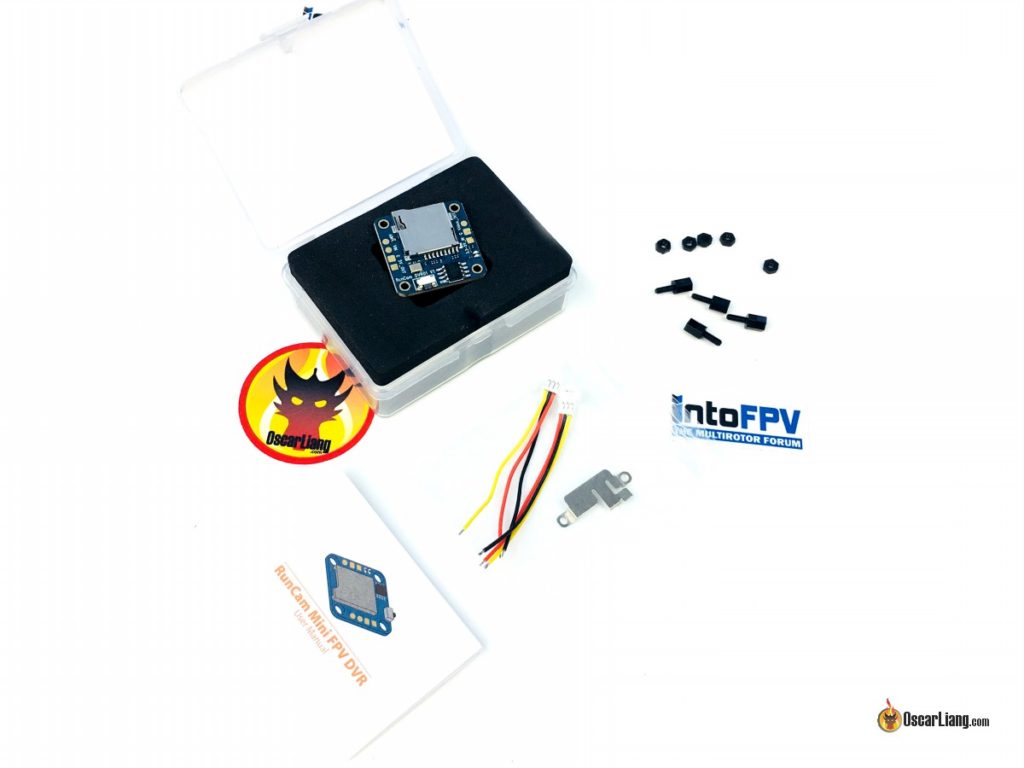 Unlike other popular DVR on the market, the Runcam Mini FPV DVR is designed specifically for mini quad and micro quad FPV flying. 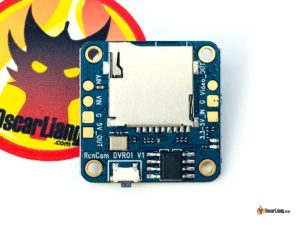 It’s a 25x25mm PCB board with 20x20mm mounting holes, you can easily install it in the FC stack. Check for 20mm to 30mm 3D printed adapters on thingiverse if you want to install this in a 30mm stack. 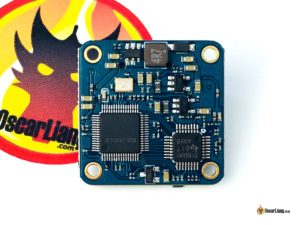 It has separate video in and video out solder pads, so you don’t have to cram multiple wires in the same tiny soldering pad. It makes wiring and soldering much more convenient.

Here is the basic spec:

Another cool design is the SD card protector which is a safety feature they introduced in the Runcam Split V2. With all other onboard DVR, the SD card slot is just wide open and the card can pop out easily in a crash. 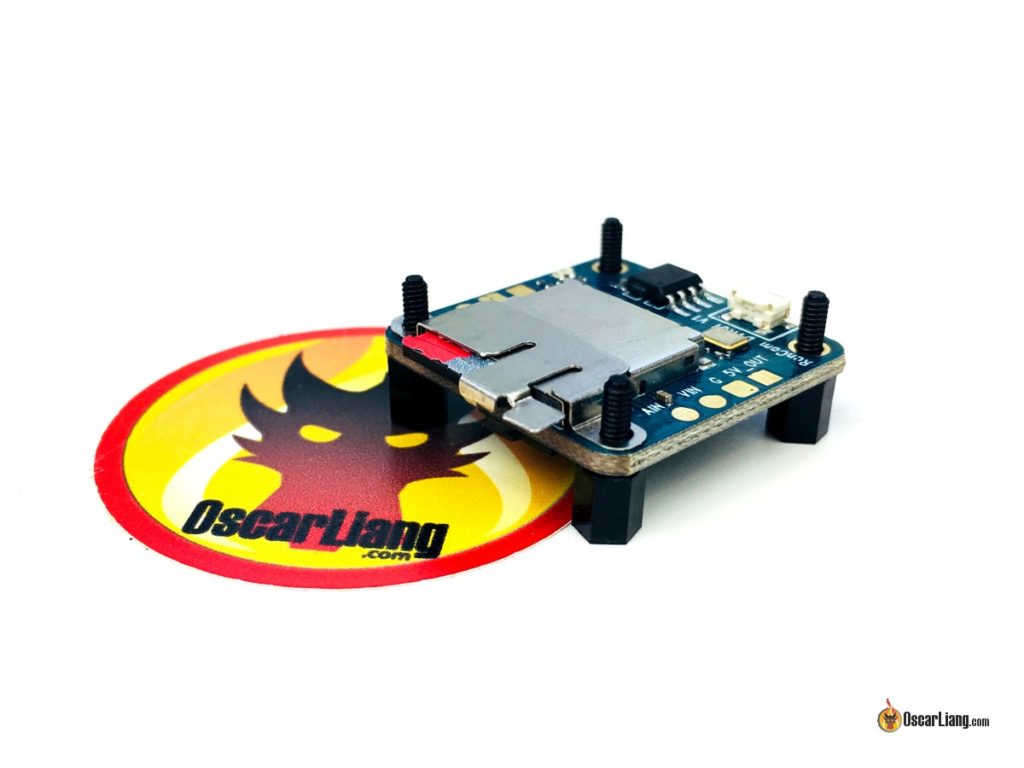 I am glad to find out that the Runcam Mini DVR doesn’t have the same image cropping issue as the HMDVR!

However the resulted image file has lower resolution and bit rate.

It’s really not that big of a deal when you compare the footage side by side, the image quality difference is hardly noticeable. But if you look really close, you can tell the footage from HMDVR-S is a tiny bit sharper and has more detail to it. 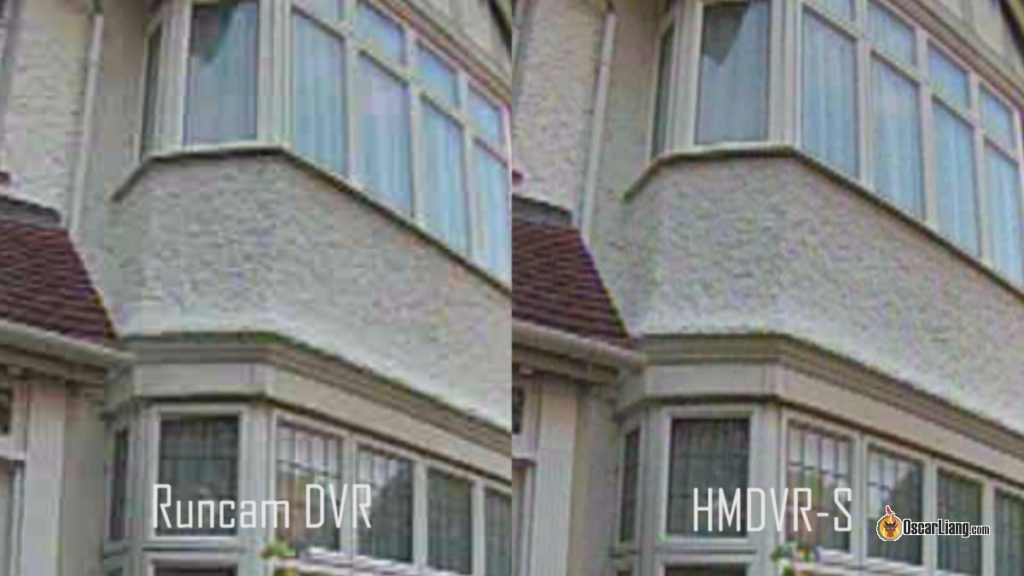 You might also wonder if the Runcam DVR introduces latency to the video output? The answer is no. The Video input and output on the Runcam DVR are actually connected, so the video signal is in fact split from the camera to the output and DVR.

Still, Not Quite the Perfect DVR.

I will replace the HMDVR-S with the Runcam Mini DVR, simply because it doesn’t have the annoying cropping issue, as well as the nice features that make it so easy to use.

It’s definitely another good option, but there are still things that can be done better.

First of all, I wish it had higher bit rate and resolution. Though the differences are hardly noticeable and not a deal breaker IMO.

The Runcam Mini FPV DVR creates a separate video file every 5 minutes, and between files you lose a few frames just like the HMDVR-S. Perhaps the Runcam is still slightly better because of the longer recording duration (5 mins vs. 3 mins), considering most micro quads and mini quads have a flight time shorter than 5 mins. It would definitely be nice if it was longer, like 10 mins.

A 2GB SD card can store approximately 1 hour of recording. If you fly and record all day long, an 8GB or even 16GB should be a good option.

Same as other DVR I have tested, it loses the video file if you disconnect power without pressing the “stop recording” button! It’s an annoying issue and  I wish they could have come up with a fix for that.

You can format your SD card by holding down the button for 5 seconds, which is a convenient feature. But be careful as you can also accidentally delete all your videos.

Here is the manual that comes with the DVR board. 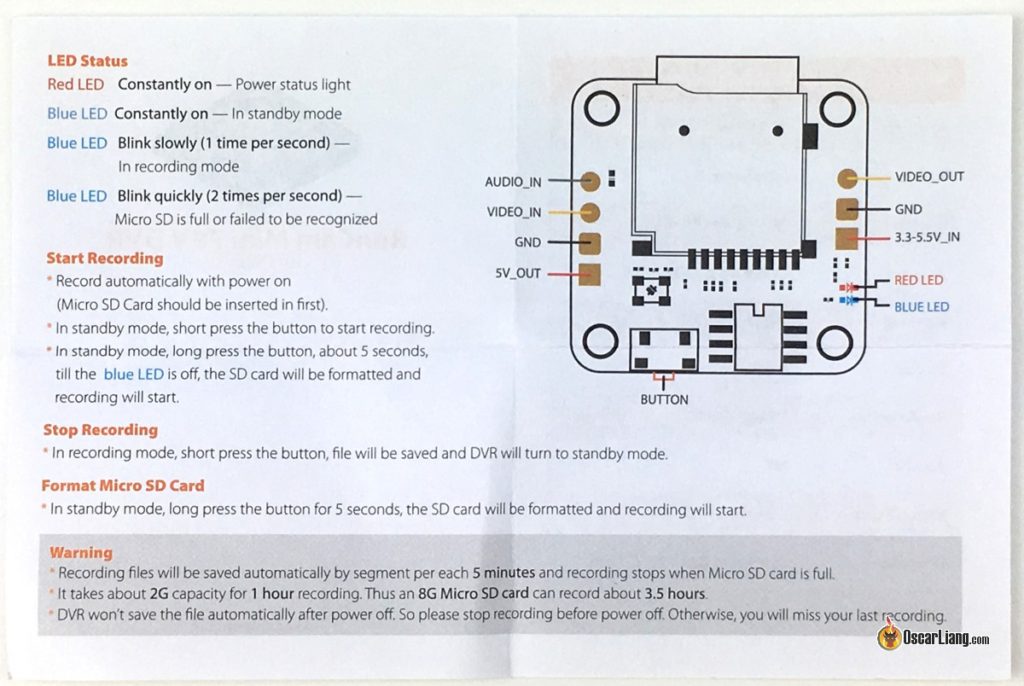 I just got the 1.1 version of this DVR and it has an extra pad for remote control. This can be connected to a free resource pin on your flight controller (for example the LED_STRIP pad) and then configured to start and stop the recording when the kwad is armed. You can read about it in the manual runcam.com/download/RUNCAM-DVR-S-Manual.pdf . I love this feature because I forgot to stop the recording on my HMDVR-S too many times, losing the last recording.

I Installed one of these ground side, directly after the VRx, and before the display. I notice in some recordings that it switches to a NTSC sized frame so chops off the bottom of the display. Its rather random which recordings do this though – many are fine, showing the full PAL frame in the playback. I also noticed that the number of frames lost between clips seems quite random. In one instance I had 27 frames lost whilst the biggest gap was 101 frames. Go figure!

I believe its because the video line has to share the same ground as the initial source. In other words this board will only work with a 5v camera.

RUNCAM MINI DVR BOARD
1) need with USB out.
2)need with atleast 64gb support.
3)Accept Analog video input.
4)should have play back option.
5)should save snap shot.
6)low power consumption.

Kindly suggest any MINI DVR with above feature

do you know if there will be a newer version with higher resolution coming out?

No haven’t heard anything.

First you have to format SD card on it. read manuals.
I install it in my quanum cyclops V 1 goggles, since they don’t have recorder. I just grounded Audio in and used coax cable to connect video signal and ground.

Just wired one up..correctly and cleanly with 5v regulator from pdb(confirmed). But does not record.In fact the only led lit is the red led on solid,
Don’t know what the issue could be .Emailing runcam support.

I have the same issue. Any update?

I wonder how long it’ll be before the DVR is more integrated with the flight controller, so that when you disarm the quad the recording stops a few seconds after.