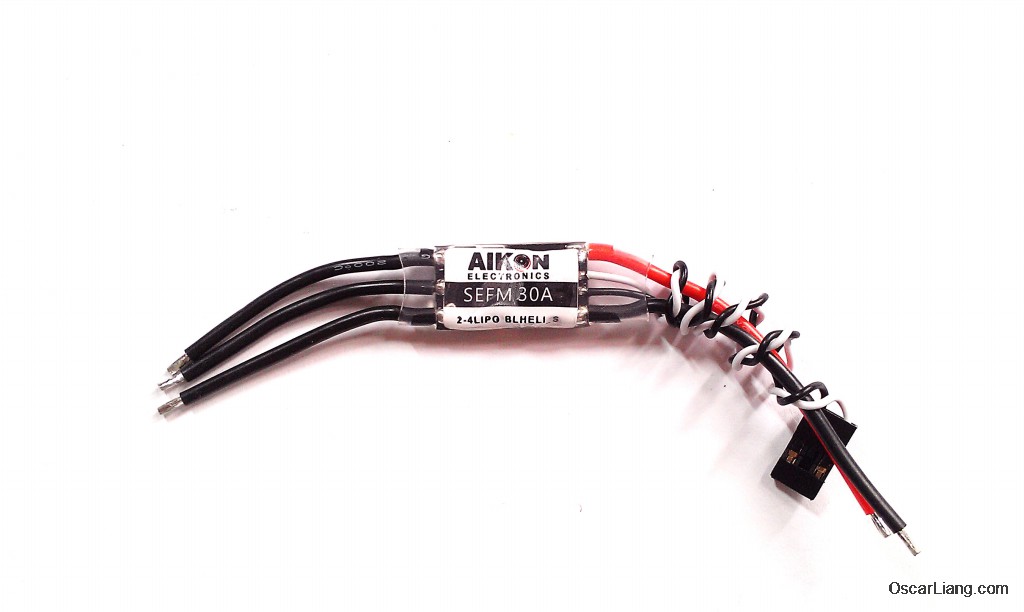 Many thanks to Aikon for sending me their new SEFM 30A ESC for the tests, which runs the latest ESC firmware – BLHeli_S.

I will test the Aikon SEFM 30A ESC on the thrust stand first, and then later on put them on a quad and try them in real flights. 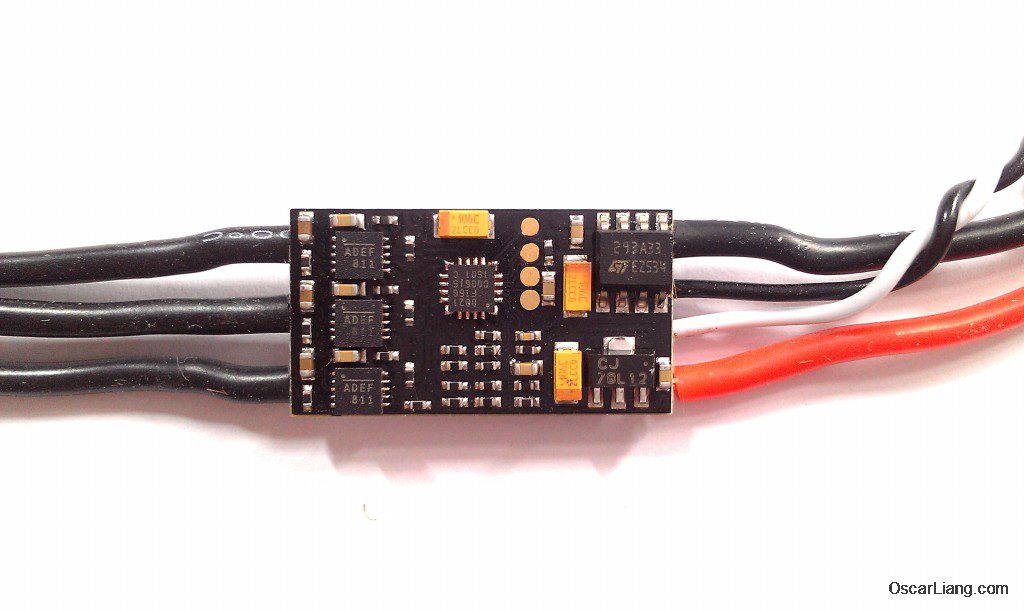 Why am I excited about this new ESC?

Apart from being rated at 30A (good news for people who like to over-prop their motors), the Aikon SEFM is one of the first electronic speed controller to support BLHeli_S firmware.

We have already covered BLHeli_S before, check out this post to see why it’s awesome.

The ESC’s I received came with BLHeli_S 16.0 firmware, and I updated it to the latest version (16.1) before testing them. The way flashing BLHeli_S is the same as BLHeli, you can either use flight controller pass-through (Cleanflight), or the “one wire interface” method.

The Aikon also has dedicated hardware to generate PWM signal for the motors, which make them run smoother. Traditionally majority of the ESC’s use software generated PWM (Littlebee 20A, XM20A, you name it), it works but it isn’t the best. KISS ESC’s are highly praised for their smoothness thanks to the hardware PWM, and now they are finally facing competition. 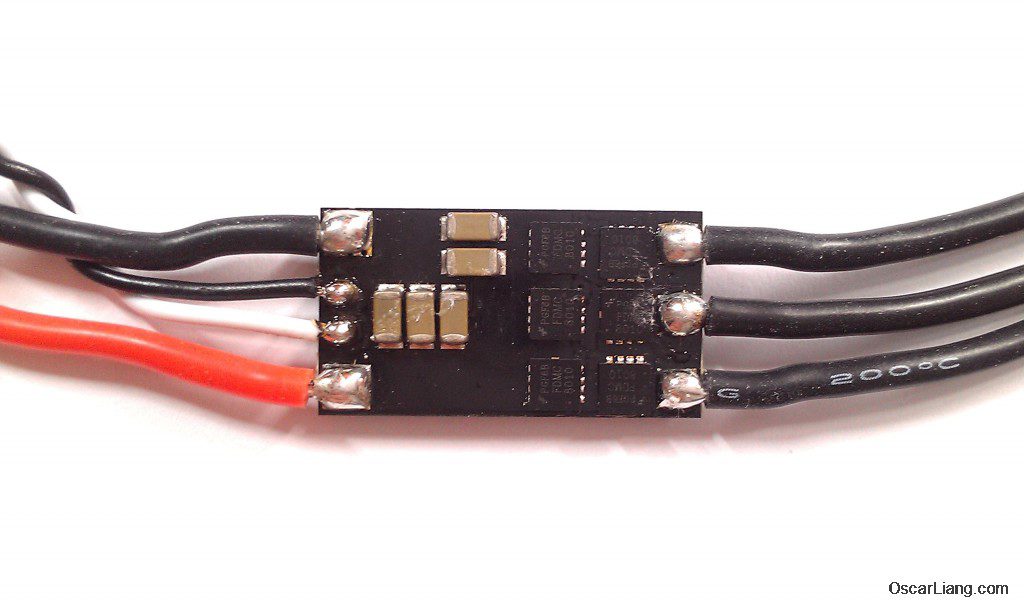 Very interesting to see that the Aikon outperformed both Littlebee 20A and XM20A in terms of thrust. 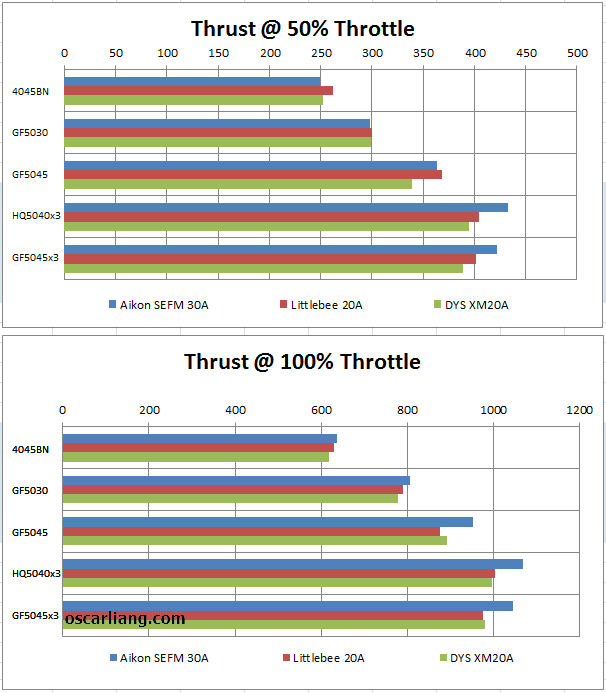 In the coming days I will be testing these ESC’s on a quadcopter see how they perform, stay tuned.

Hi Oscar…Great blog. Need your recommendation. I upgraded the firmware to the latest on the Aikon 30A. Unlike the Kiss24A, I dont see it actively breaking. Am i missing something. Did I do something wrong? Please advice.

Active Braking is turned on by default and you can’t turn it off :)
I believe what you are witnessing is just “braking on stop”, which you can switch on in BLHeli_Suit.

Hi Oscar, my Aikon sefm firmware also got erased and I can’t refresh blheli and I can’t find any info on my issue, any help would be appreciated.

Does the LittleBee 20A BLHeli_S also have dedicated hardware to generate PWM signal for the motors like the Aikon 30A? I just received my new LB20A BLHeliS ESCs and I’m trying to decide if I should switch them with Aikon 30A ESCs.

BLHeli_S ESC should all have hardware PWM

Any idea on how to unbrick/restore FW onto this esc using the pads?

I don’t know but need this info also on the pad assignments after the 16.3 firmware erased them and they are now not recognised in BLHeli.

Hey! Did you ever run into the Desync issues as well? Still struggling…

no… i haven’t noticed any desync with my aikon 30a..

when should I use medium high motor timing with this esc?

when it performs better for you :)

Could you test the Aikon with 5s? Someone is running them on 5s and I would like to know if they can handle that?
https://youtu.be/0lzVs4CUo1s

Did you have issues getting these working? I’m having weird desync that makes the quad fr eat out when I try to fly.

just building my quad this week with these ESC, running them on SE2205 2300KV we will see!

I wish these were out like a month earlier when I bought LB30 that are huge and twice as heavy! Maybe next season ;)

there could be new ESC coming out every month so you don’t have to feel sorry haha :)

What motor did you run these tests with?

“Stay tuned” is simply the best closing line for a quadcopter-related article!
Thanks!

Do you think it’s a fair test facing the aikon 30a esc with the xm20 and little bee?

Surely a better test would be with similar 30a esc’s?

Great blog you’ve created and I’ve learnt so much from it. Keep up the good work ?

The test here mainly focus on how much power they put out, and they are probably the most common ESC right now, so people might find an excuse to upgrade to :) LOL
main reason is that those ESC’s are the only ones that i have.