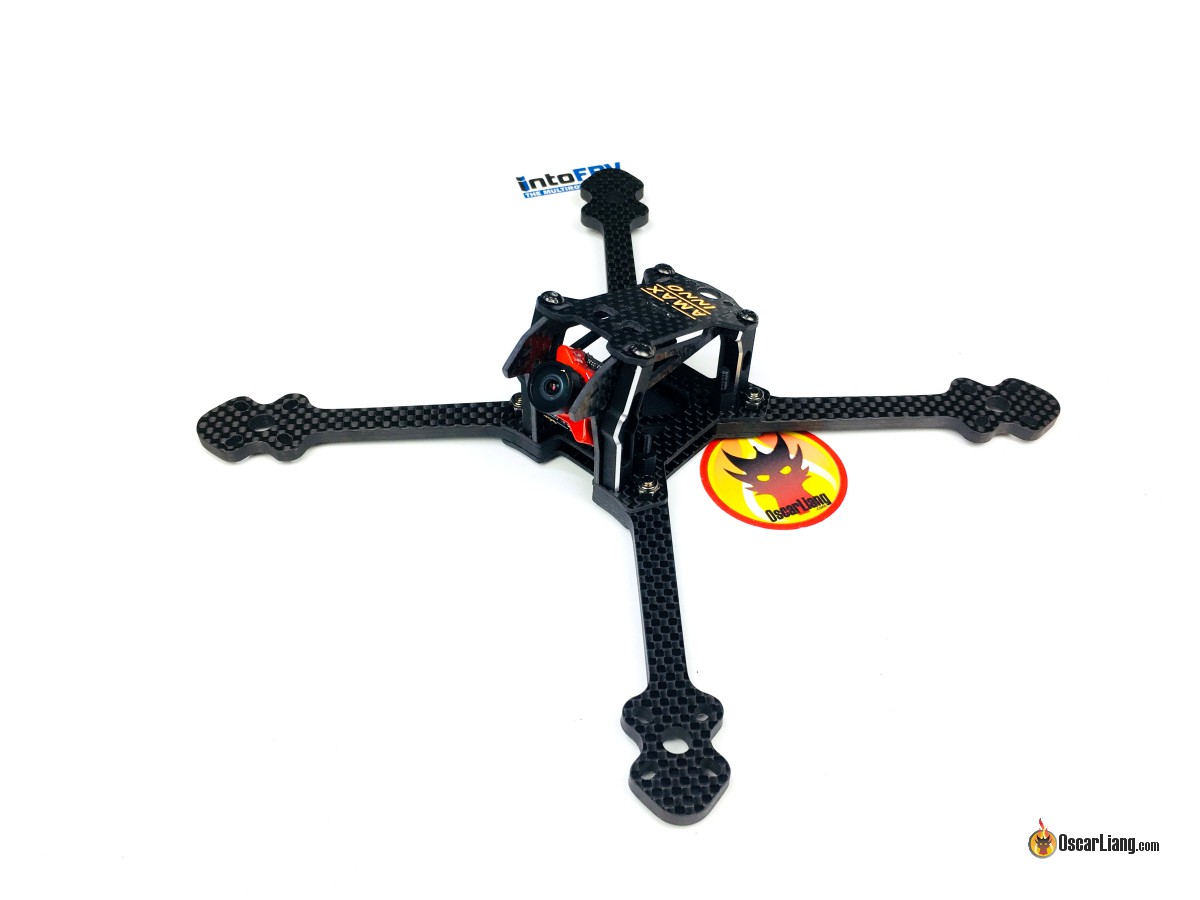 The Amaxinno 5-inch FPV Racing Drone frame is the 2nd ultralight frame we reviewed in a row. In this article we will go through the details of the frame, build it and test it.

The frame in this review was kindly provided by Amax: http://bit.ly/2EGI8mQ 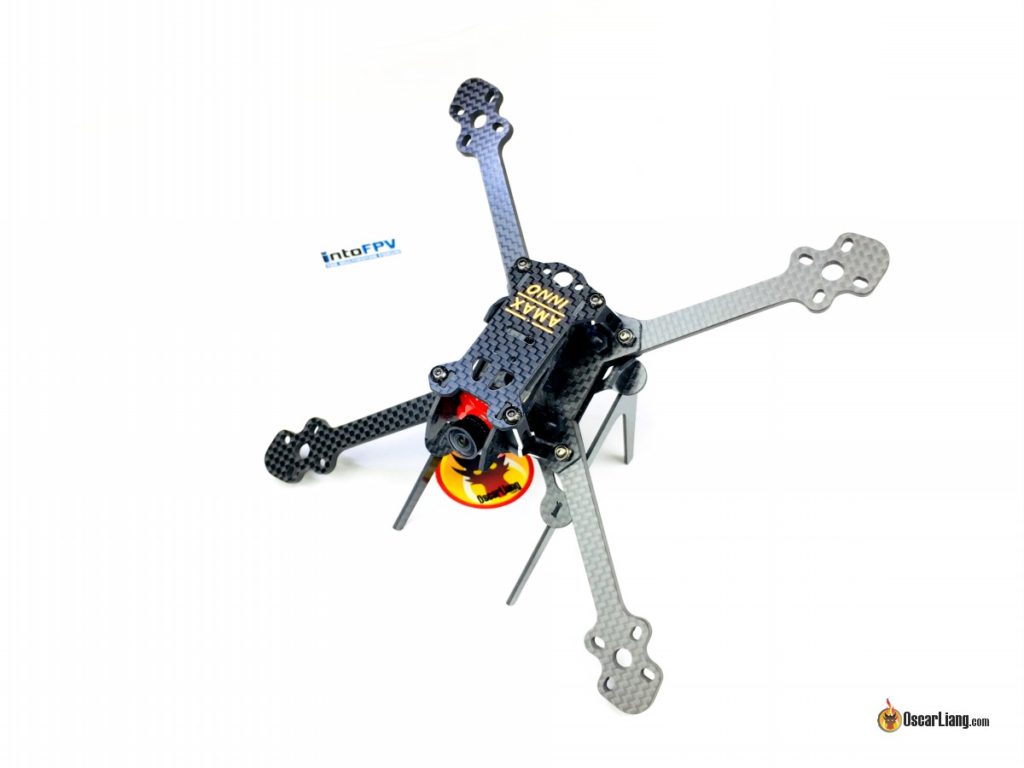 The frame kit comes with the following hardware: 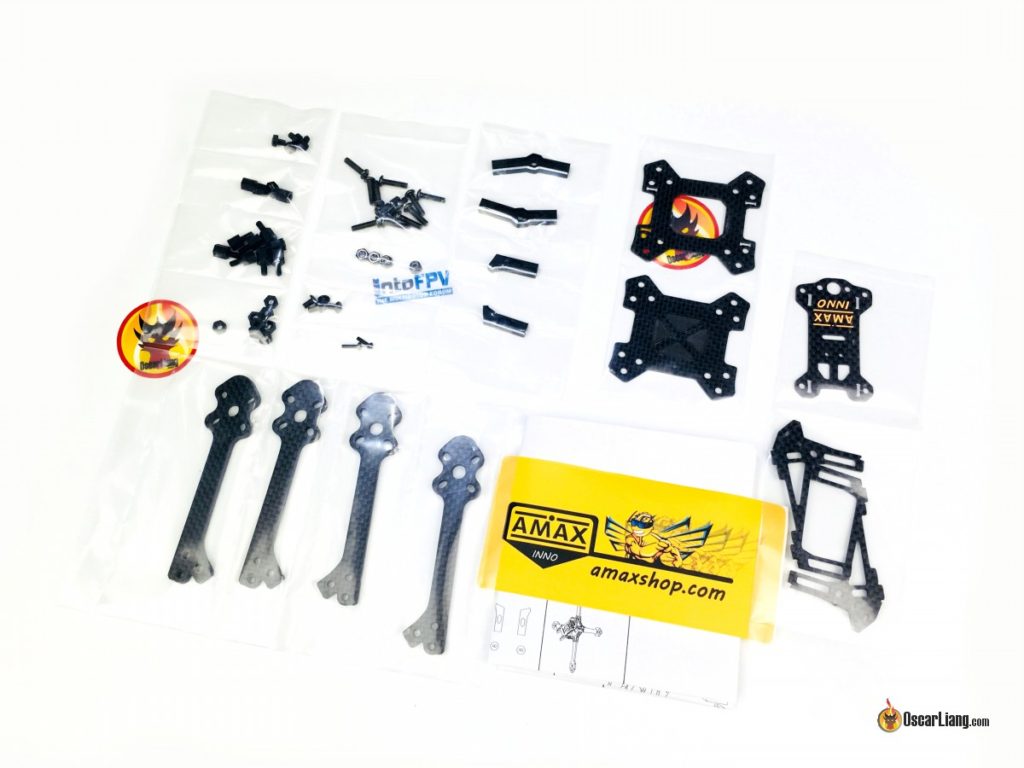 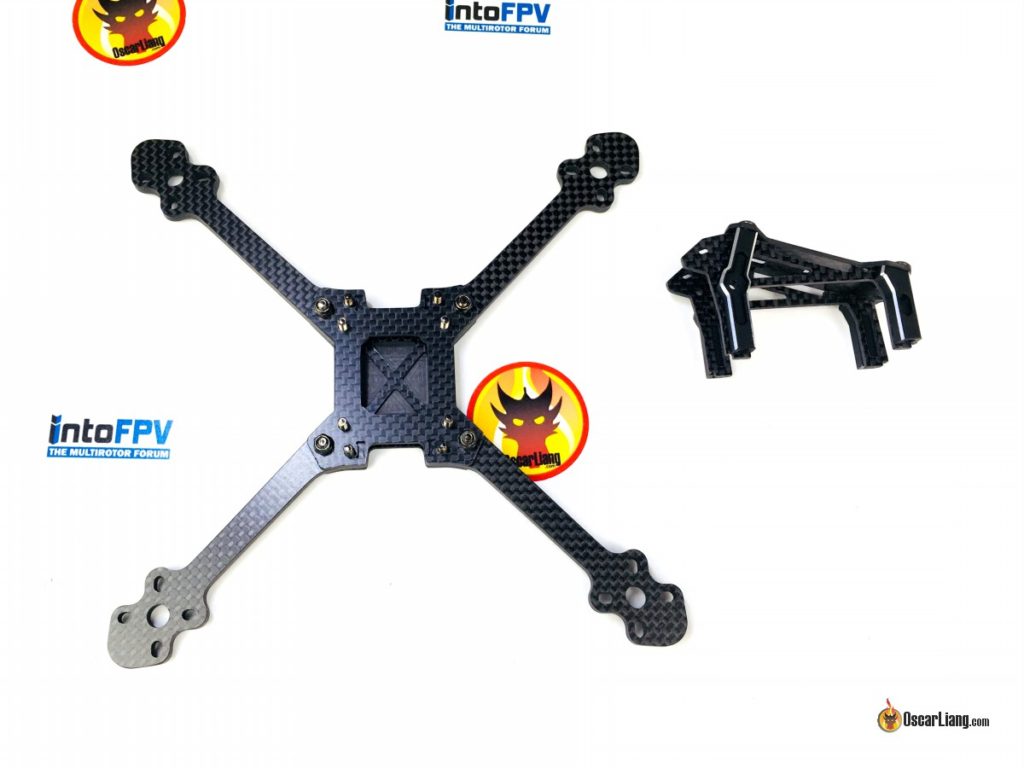 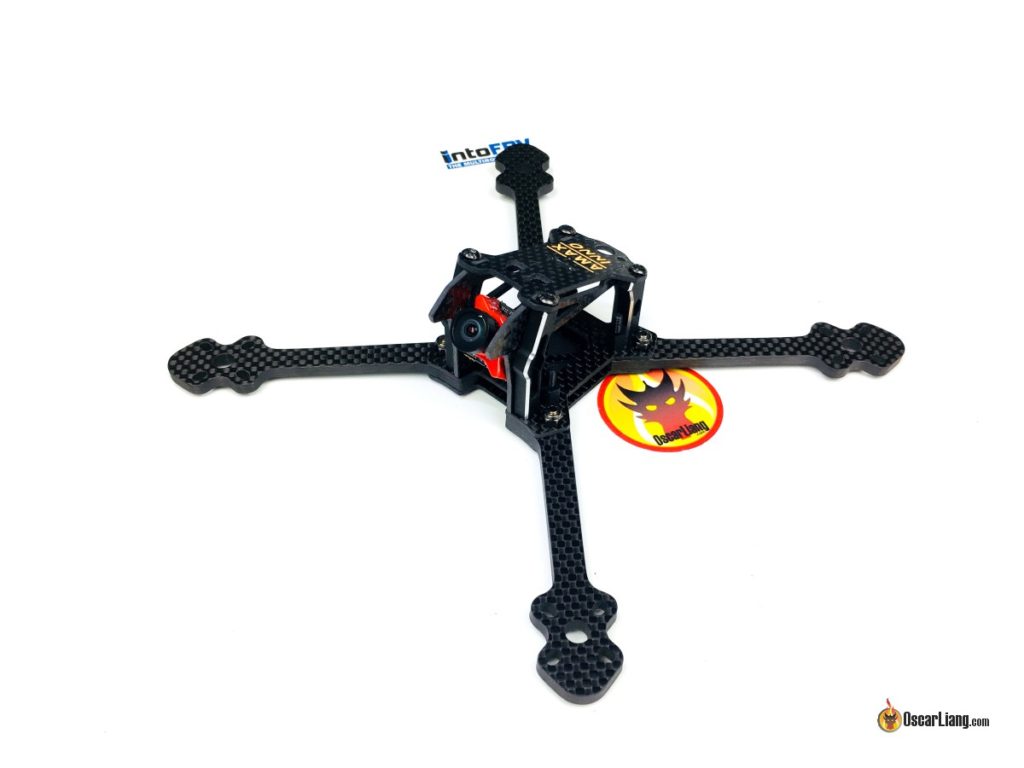 The whole frame weighs only 59g, it’s a pure-X design, with a 190mm motor to motor distance. 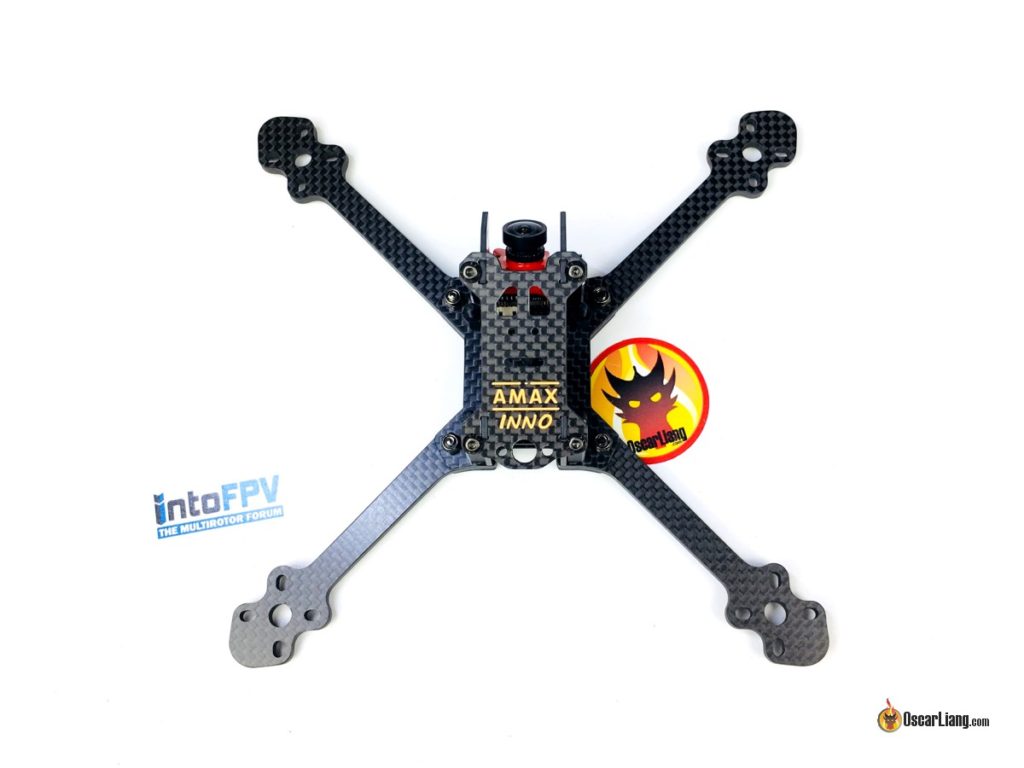 Beware that the FC stack height limit is 20mm! So you can only use maximum 2 boards inside the frame. 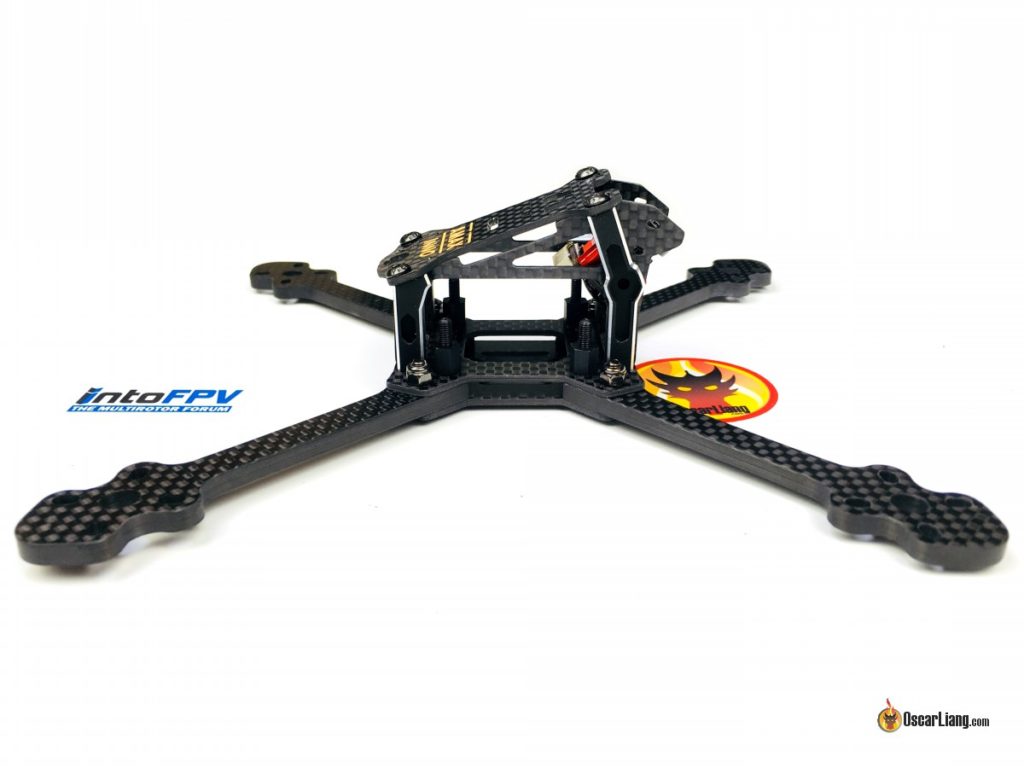 Here is a closer look at the arms carbon fibre, they are 4mm thick. 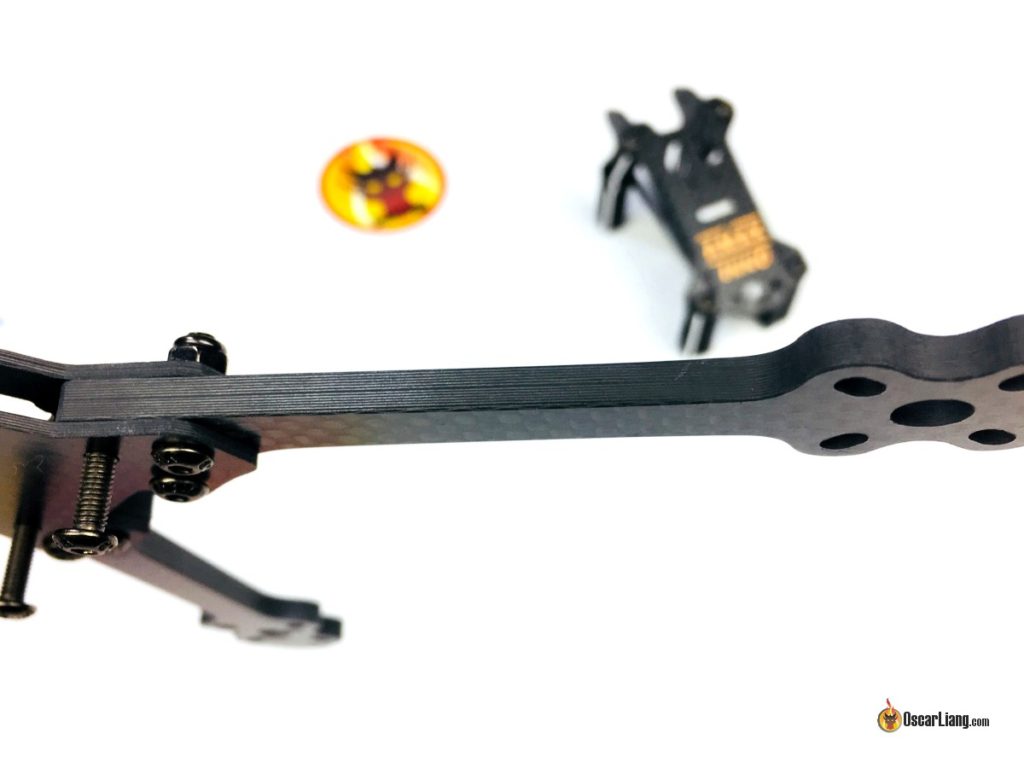 I am happy to see that all the carbon fibre parts are slightly chamfered, great attention to detail! 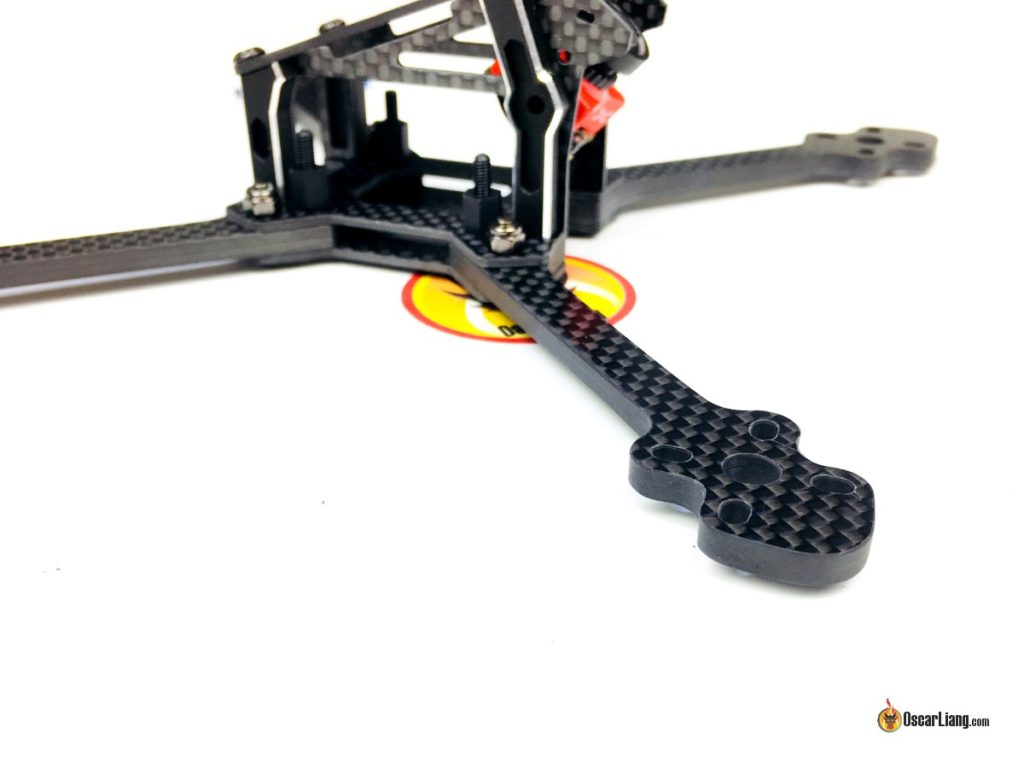 The camera mount fits a micro size FPV camera perfectly without any spacers (19mm wide). It allows a theoretical tilt angle between 0 to 50 degree assuming your FC doesn’t interfere with the camera… which appeared to be a problem in my build. 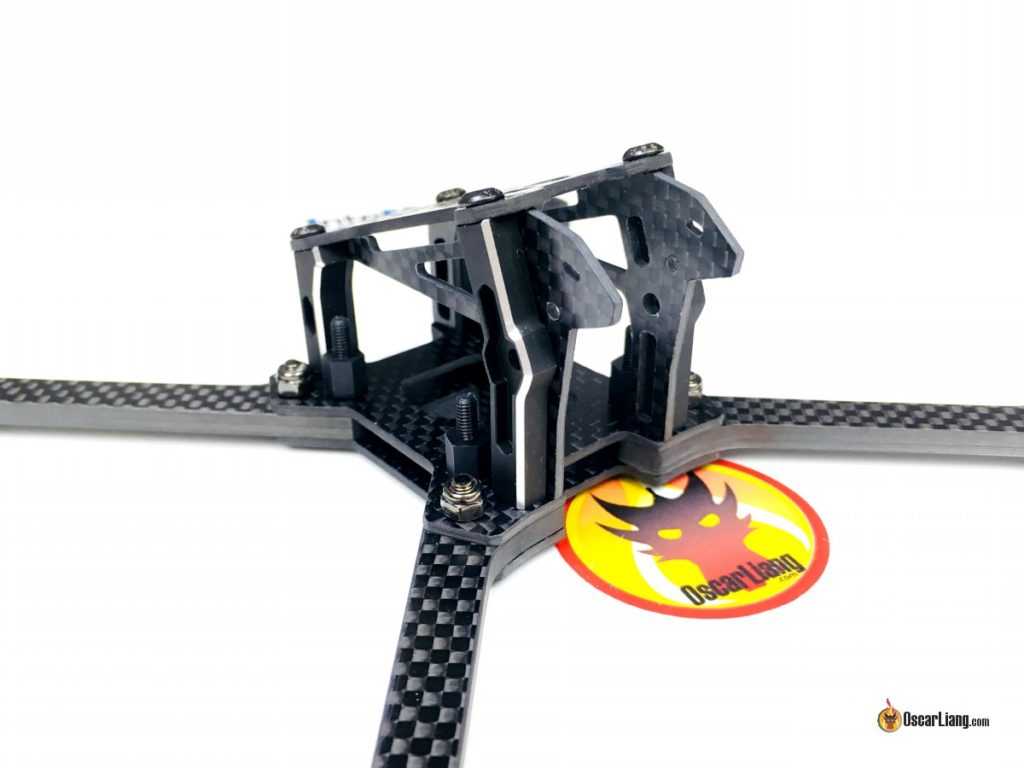 The arms are sandwiched by two bottom plates which results in an extremely stiff structure. It also leaves a 4mm gap where you can comfortably put any LiPo battery straps through. 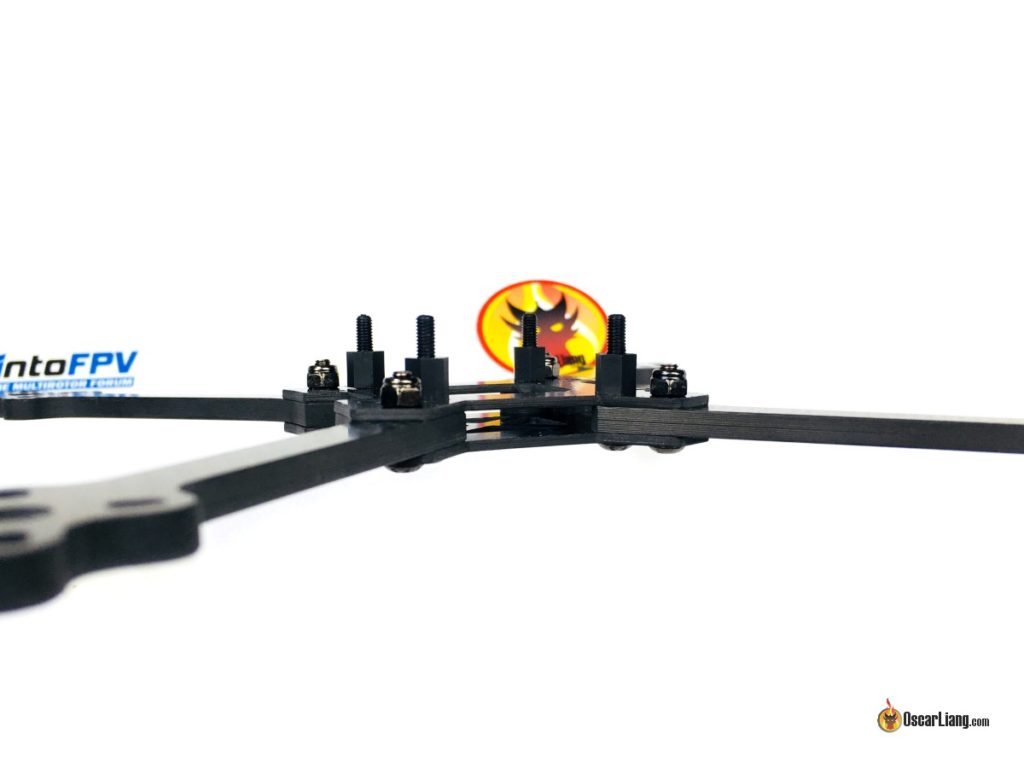 My plan is to build a 6S compatible quad using the Amax 5″ racing frame :) There are a lot of advantages of running 6S over 4S which I will try to explain in a future article. The biggest challenge would be getting the components that support 6S, luckily I have just the right parts! 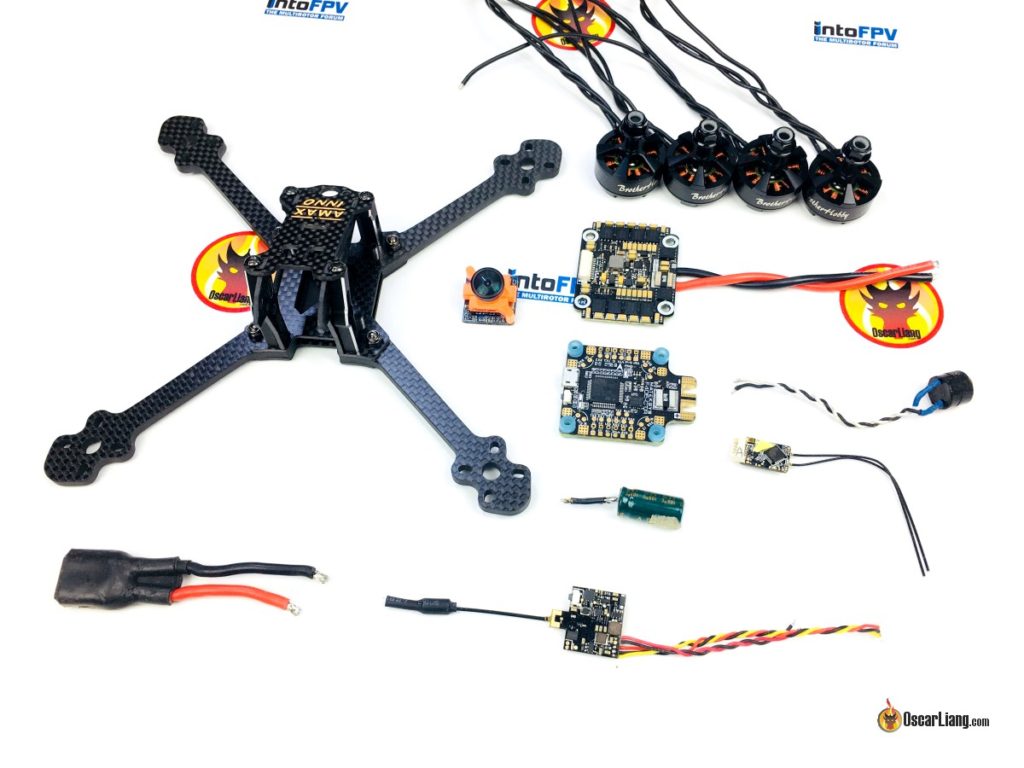 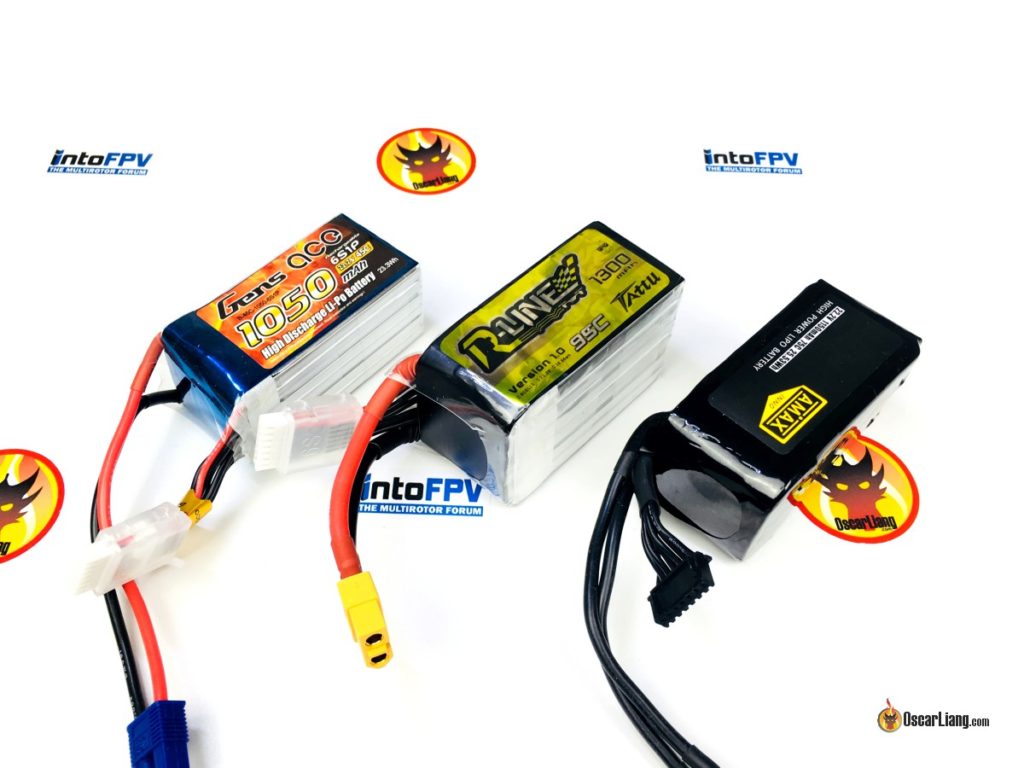 It turns out I won’t be able to use the nylon standoffs that come with the ESC and FC, because the cage is not tall enough. 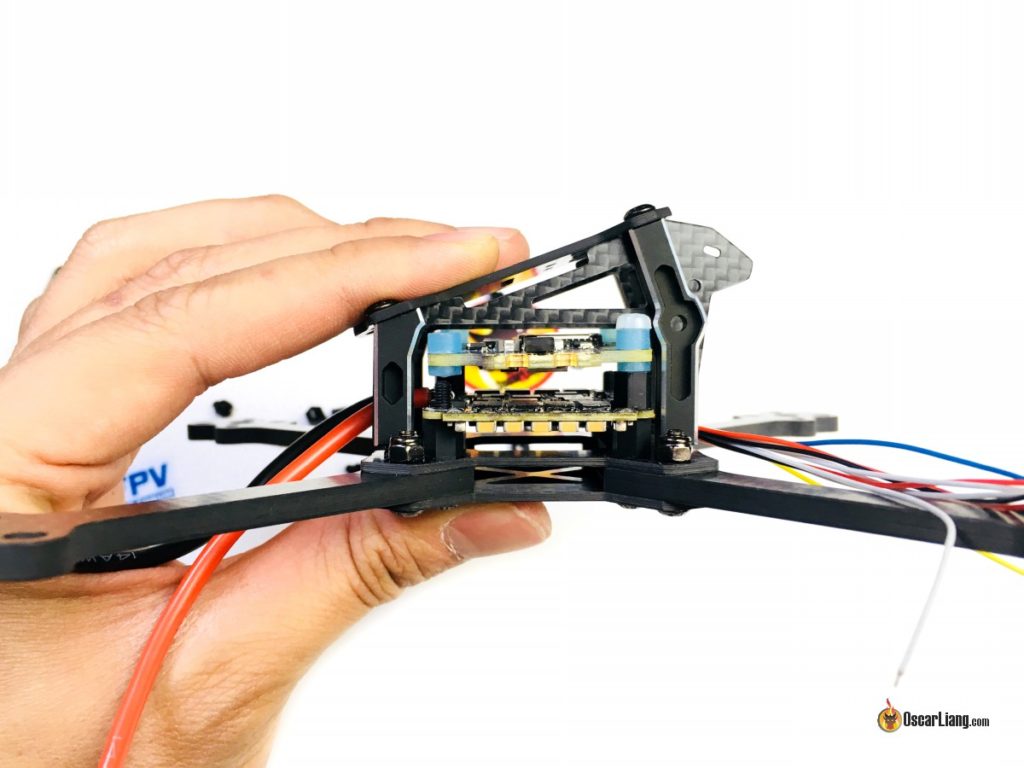 I had to replace the original screws with longer ones, and replace the 5mm nylon standoffs with 3mm spacers. 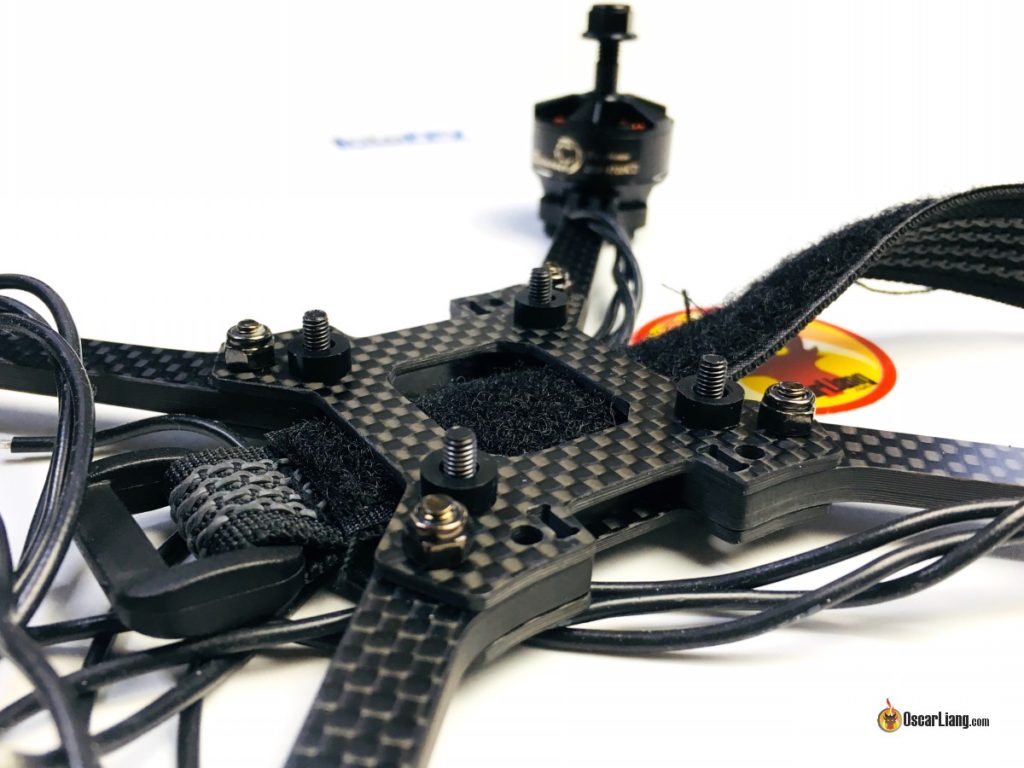 Next I installed the motors, and soldered them to the AK32 4-in-1 ESC. 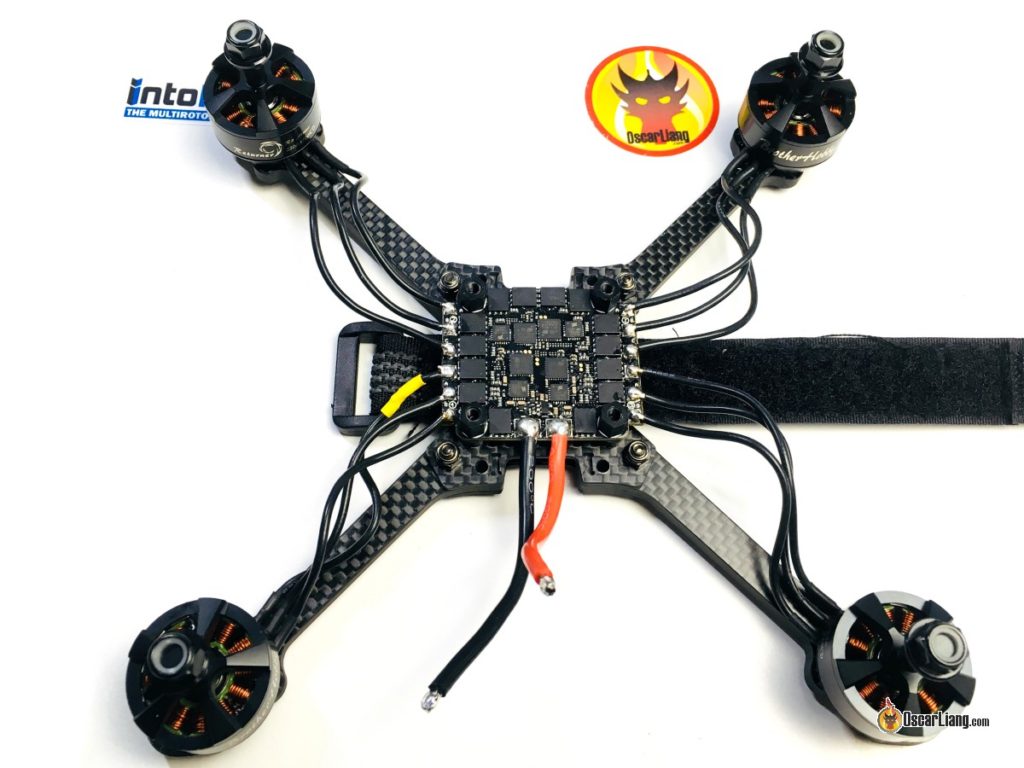 It’s probably not the best idea to pair an AIO FC with a 4in1 ESC, the excess copper in the FC and wires between the ESC/FC are a lot of dead weight. But I wanted to test how reliable the Matek CTR AIO FC is with 6S.

Here I installed the FC and soldered all the wires to the board. 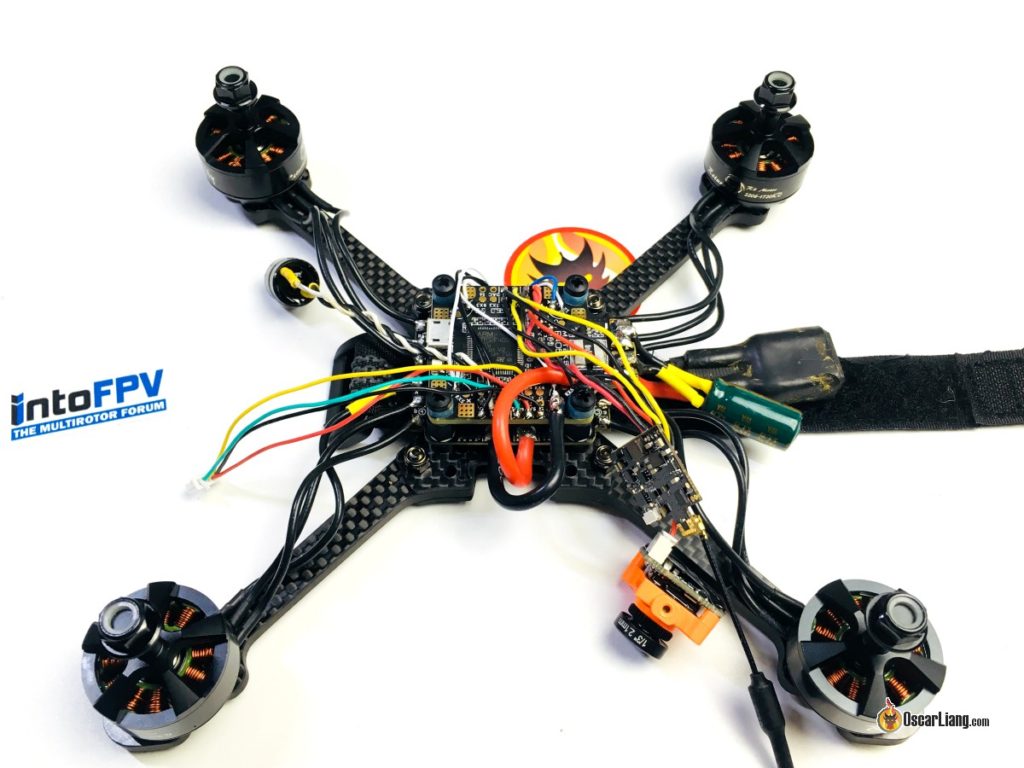 I simply mounted the radio receiver on top of the FC using double sided foam tape, and mounted the VTX underneath the top plate which turned out to be just wide enough for it. 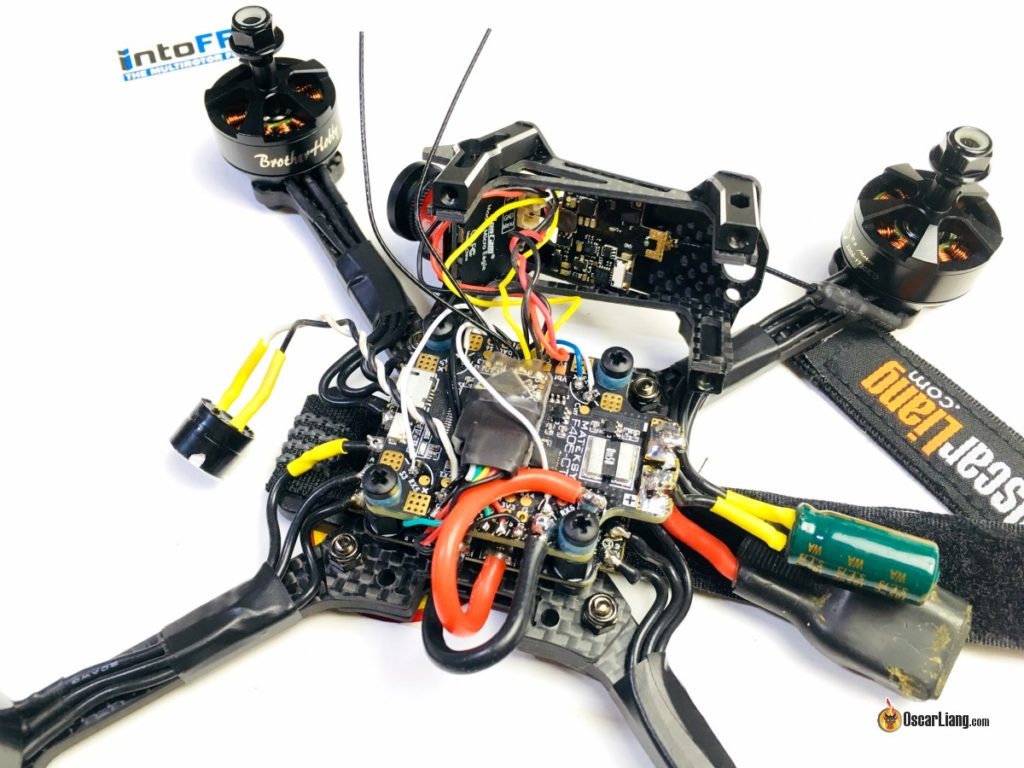 Finally I applied liquid electrical tape on the XT60 solder pads to minimize the chance of short circuit. 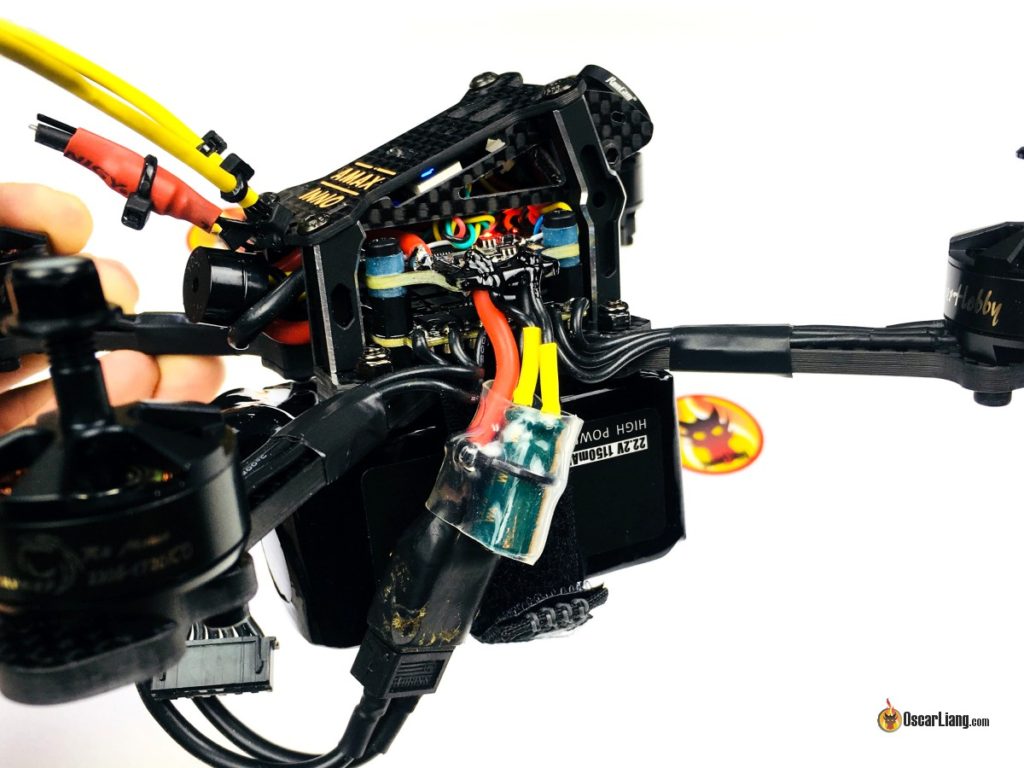 I wasn’t able to use the designated holes to mount the FPV camera because it gets in the way of the FC. I was barely able to use the holes just above and even though the camera nearly touches the FC and it limited the camera tilt angle.

The Micro Eagle also sticks out of the frame due to the longer lens, and it’s become more exposed to damage in a crash. But I am not too worried because I am planning to use a TPU GoPro mount that should provide extra protection to the top of the frame and the FPV camera.

I think I’d had less of a problem with a smaller camera such as the Micro Swift or Micro Predator. 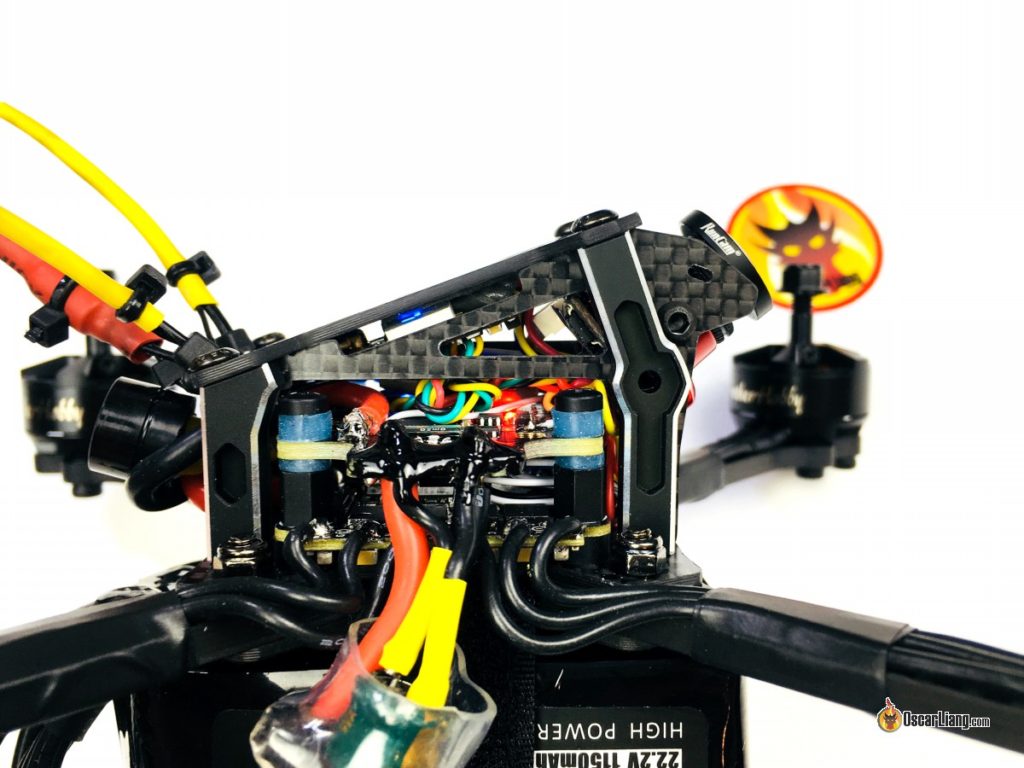 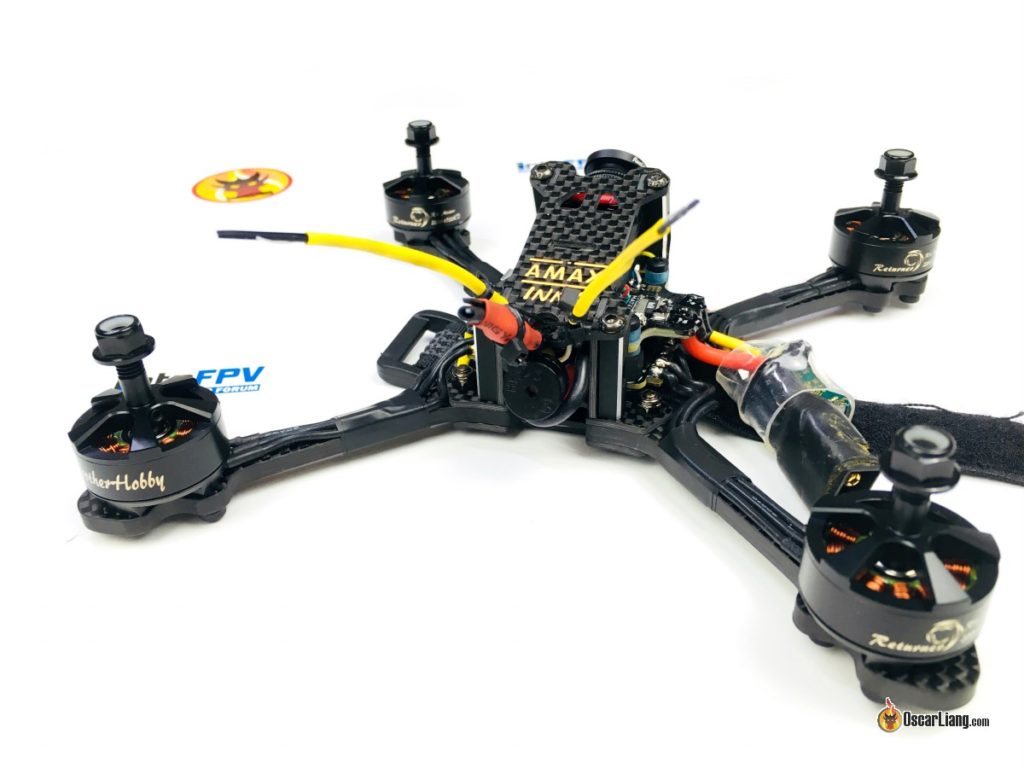 The dry weight of the finished build without battery and GoPro is only 298g! 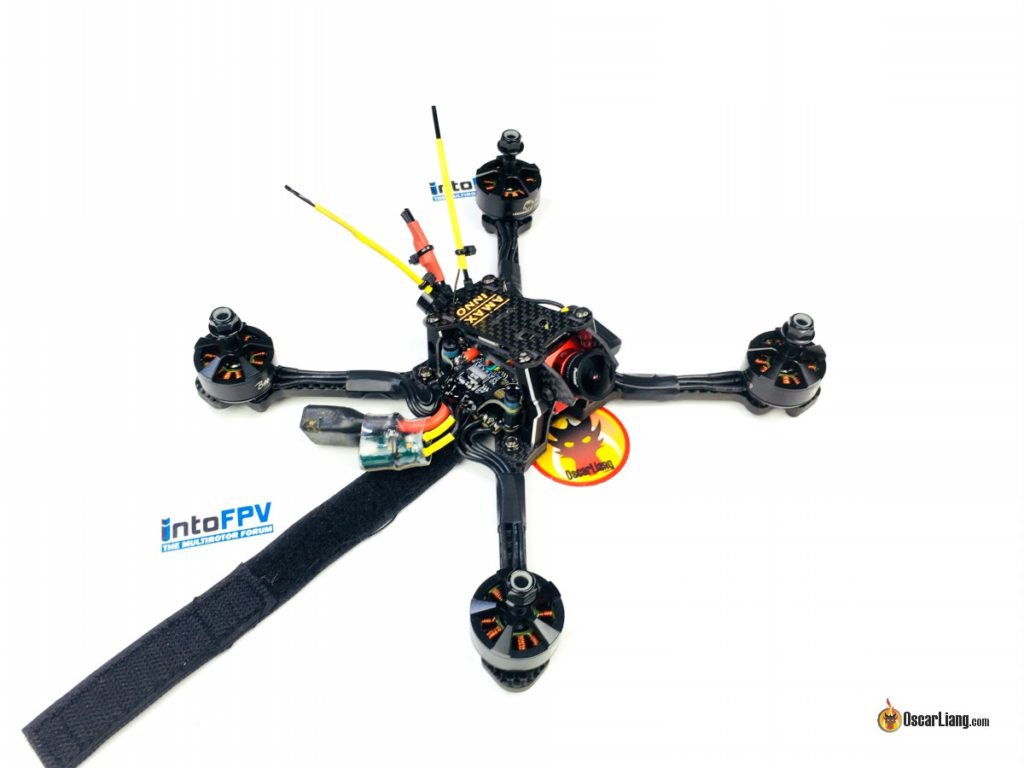 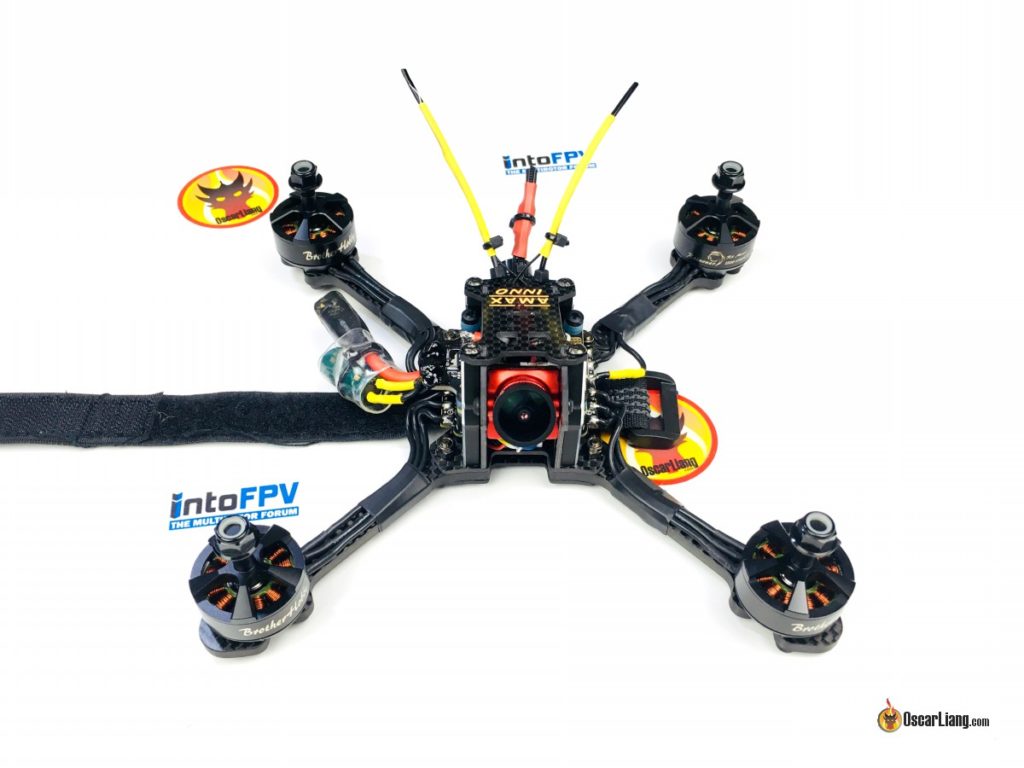 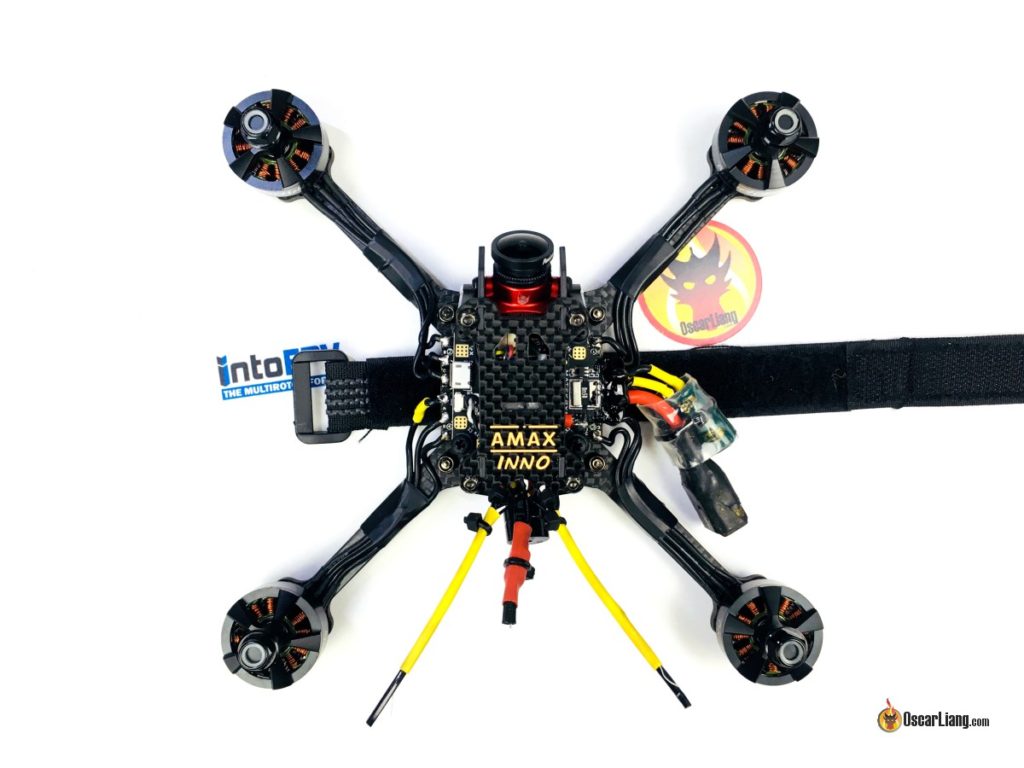 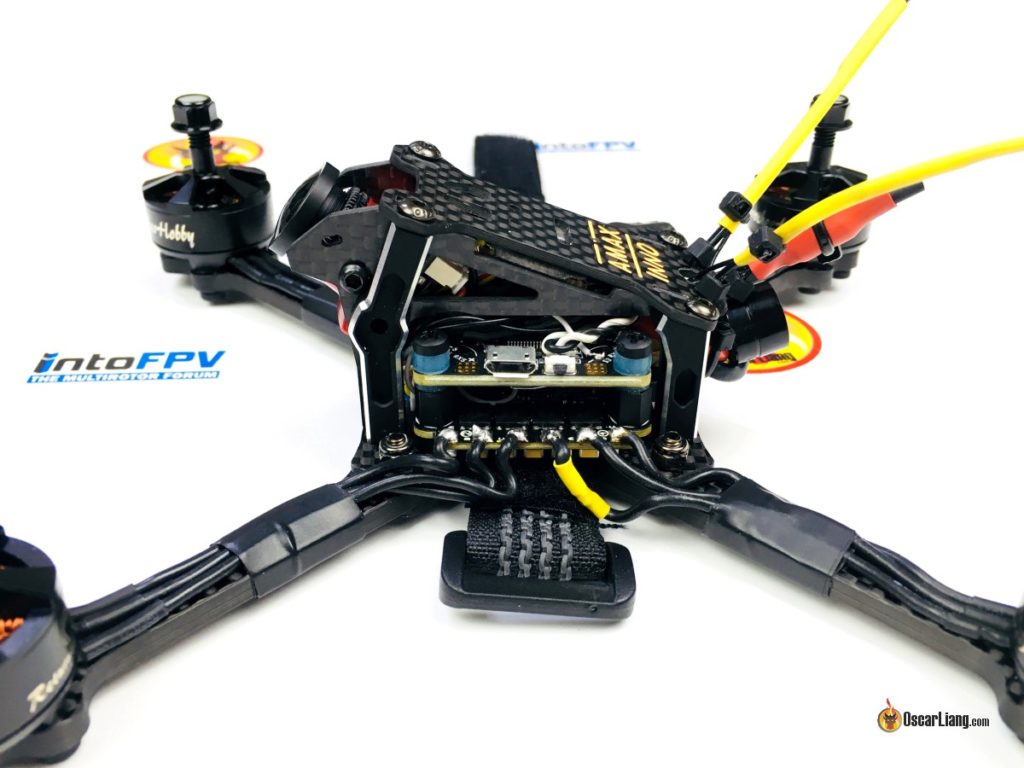 One thing that is missing IMO in this frame kit is the non-slip battery pad for the bottom plate. You shouldn’t just mount your battery on the bottom because the screw heads will most likely scratch and puncture your battery in landings or crashes.

This is the battery pads I used, they are not very thick, but you can use multiple layers: https://goo.gl/G1JwRZ 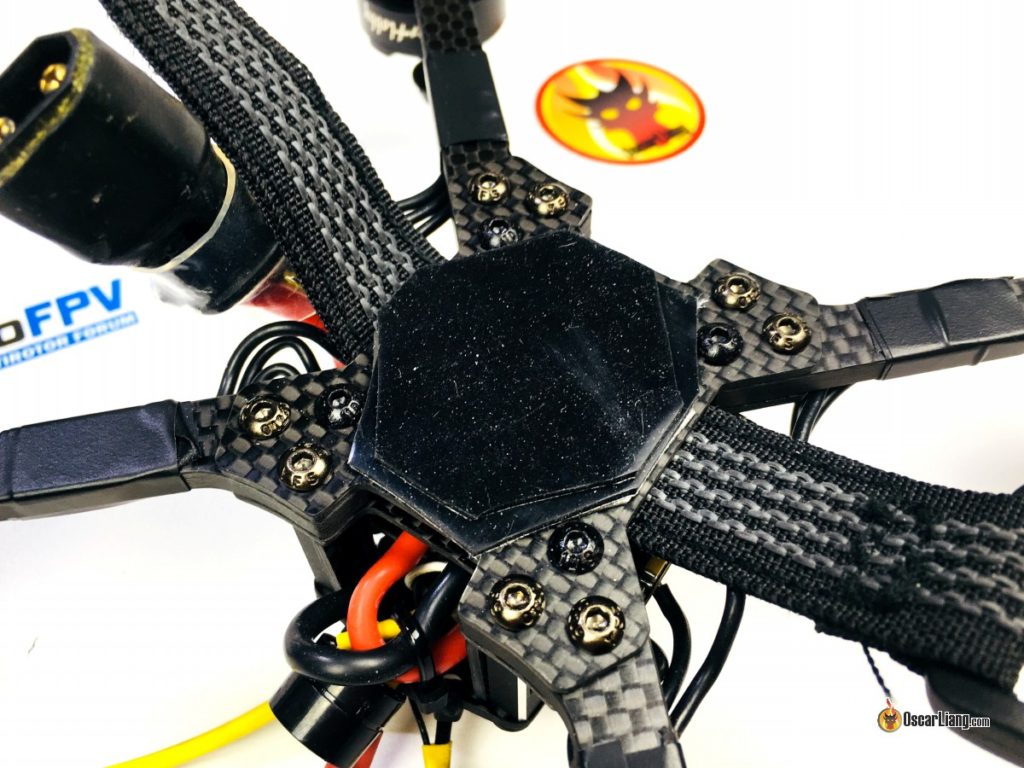 Amax sells a metal GoPro mount which I found unusable for FPV racing, I think it’s intended for slow flying & aerial filming. However you can use a TPU GoPro mount as shown here. 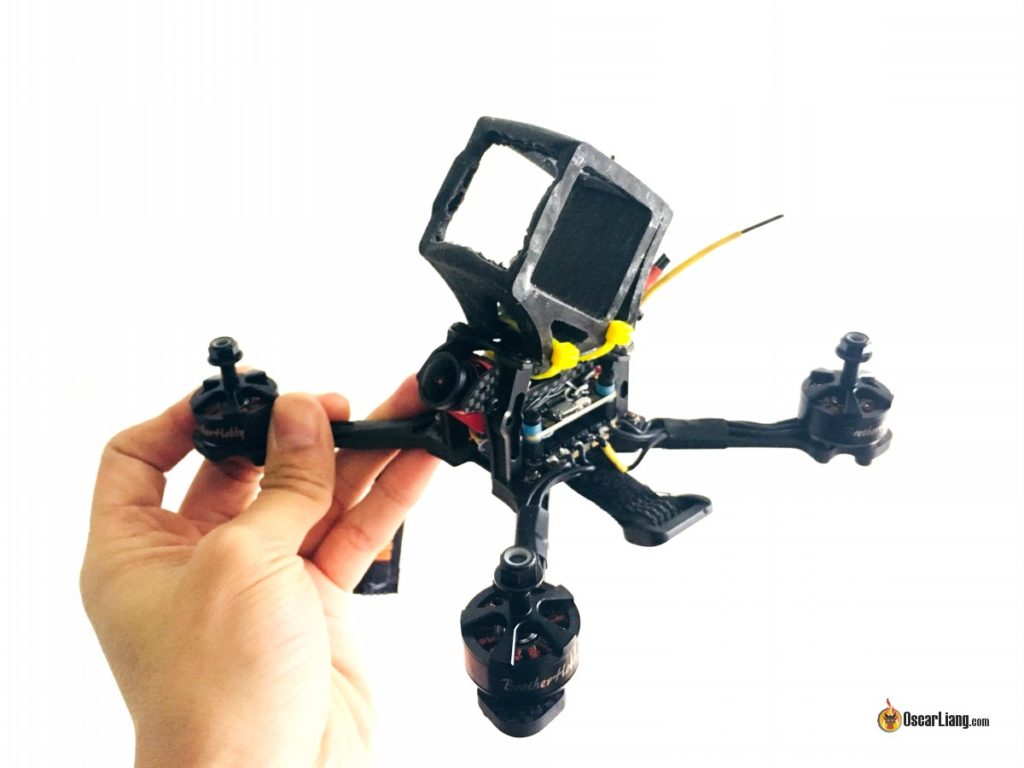 Building and repairing is relatively easy compared to some other light weight frames I have come across, and it’s strong enough to withstand moderate crashes (I’ve flown this frame pretty hard in the wood for about 5 flights and have yet broken any parts).

However just like any ultralight frames, I wouldn’t recommend it to beginners. These frames are so compact you have to be experience enough to know what sort of parts to get, and how to fit them in the frame. While the thin arms can save a lot of weight, they will also break a lot easier than wider arms.

What is the fly time for this qwd?

Hi! I have built this frame with lumnier alfa aio 4in1 escs and f4 fc, all went good, until after some crashes some vibration appears, than I start softmount motors etc. finaly sadly have burnt one mosfet on esc. Actually, the frame is very nice, realy small and compact, and I see – even beeper or capacitor is hard to find a place for them:)

I think, maybe You should connect the capacitor right at the xt60 connector? not to make another pair of wires for capacitor. I will try to test this idea:)

I had a micro runcam swift 2, it fits realy nice in the frame, almost not seen over the frame edges.

Intersting, if is some spare parts, legs can be bought for this frame?