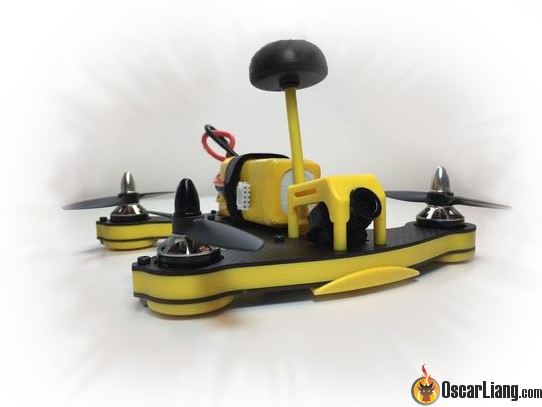 The Shuriken 180 is a medium priced racing/freestyle ARF (almost ready to fly) quadcopter, that would be great for indoor/outdoor flight. In this review we will take a look at the quality, how it flies, and how it’s setup.

Many thanks to NewBeeDrone for providing the Shuriken 180 for review, this article is written by George Hanes.

What do I get in the kit? 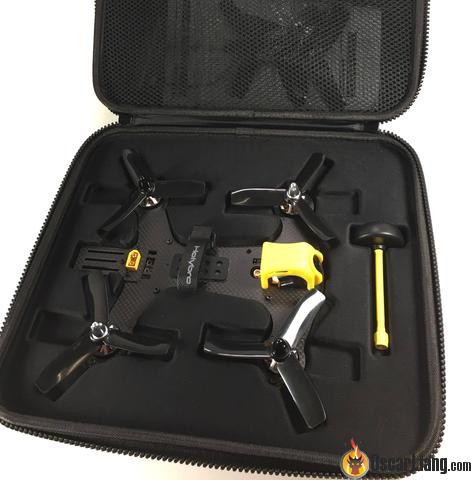 What Do I Still Need to Fly?

What Upgrades/Accessories can you get for this kit? 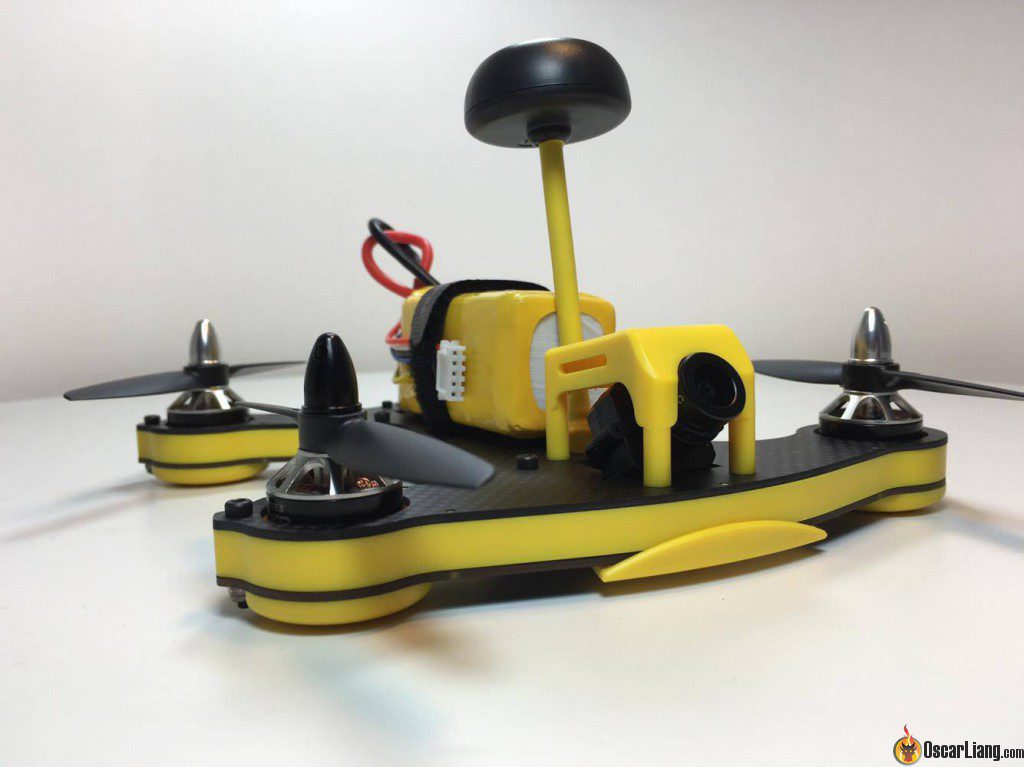 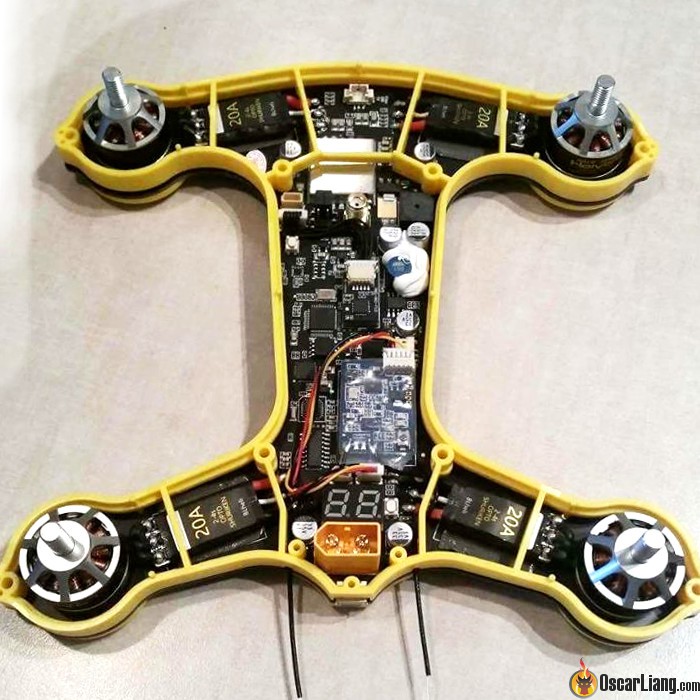 After opening the quad up and checking it over, I noticed that the solder generally looked pretty good. However I did notice a couple of dry solder joints on the SMA connector where the pad was whetted but the pin did not get soldered properly. As the other two ground pins were soldered good, this did not cause any problem. But you may check this whenever you are installing your receiver. Everything else looked and felt great, however the props were a little flimsier than my DAL props. 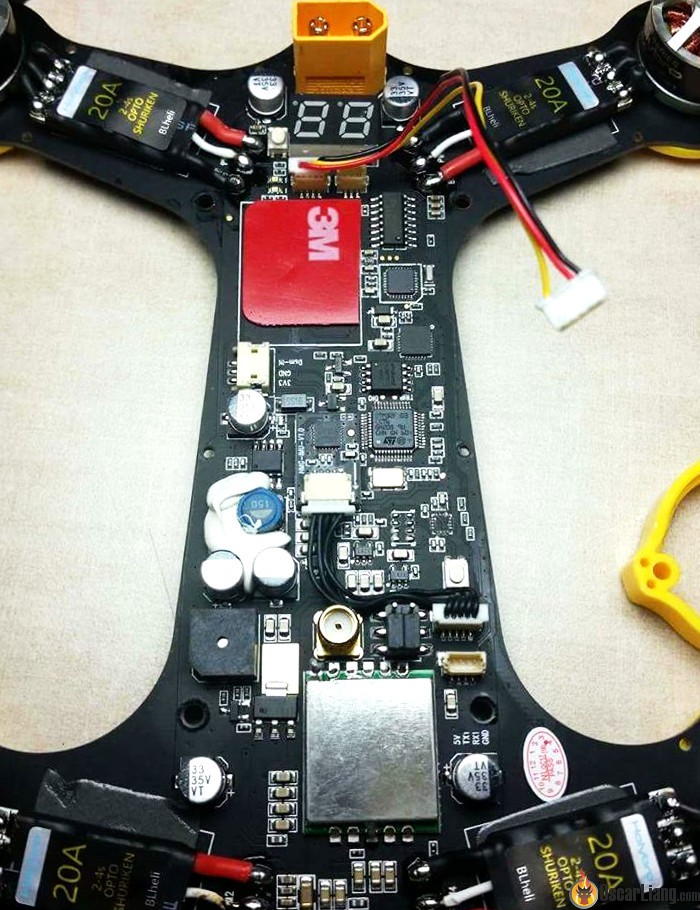 I’d also like to mention that I generally crash a lot, and did crash head on and with glancing blows into some 2’’ metal pipes more than once (flying through a steel framed tent about 60’ long). The frame has held up impressively well, and does not show much more than nicks and scrapes from my multitude of crashes. 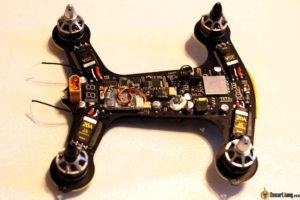 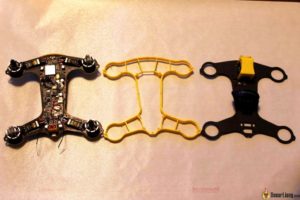 This is just a brief overview for those who are experienced in setting up models on their radio and in cleanflight. HolyBro has a more detailed RX setup video.

If you get this product I’d suggest one small modification to prevent ripping the SMA connector and solder pads out of the main board.

Being as the antenna is pretty rugged and sticks up more than anything else it takes the brunt of a roll and can damage the SMA connector and solder pads after a few hard crashes to the point of making your antenna loose or completely broken off. If you’d like to avoid this I’d suggest that you get a flexible mount and mount the antenna to the side of the quadcopter.

Here are some quick instructions for that:

After installed the flex mount should take the brunt of the impact away from the antenna and the repairs less costly/frustrating. So far with around 3+ hours of flight I have ruined 3 props, cracked the, broken the antenna connector out of the board, and broken 3 flex mounts with 2 made out of Diatone props and one out of a DAL prop. (these were the DIY side mounts). 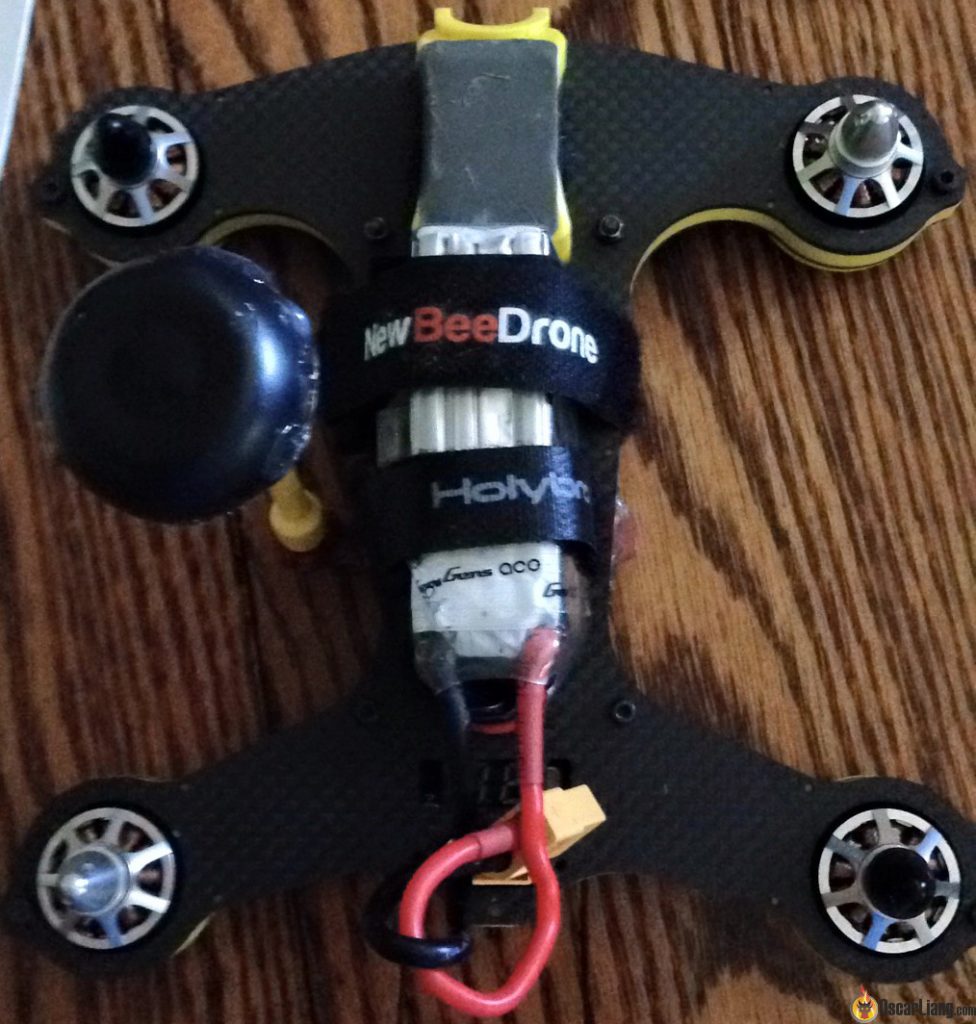 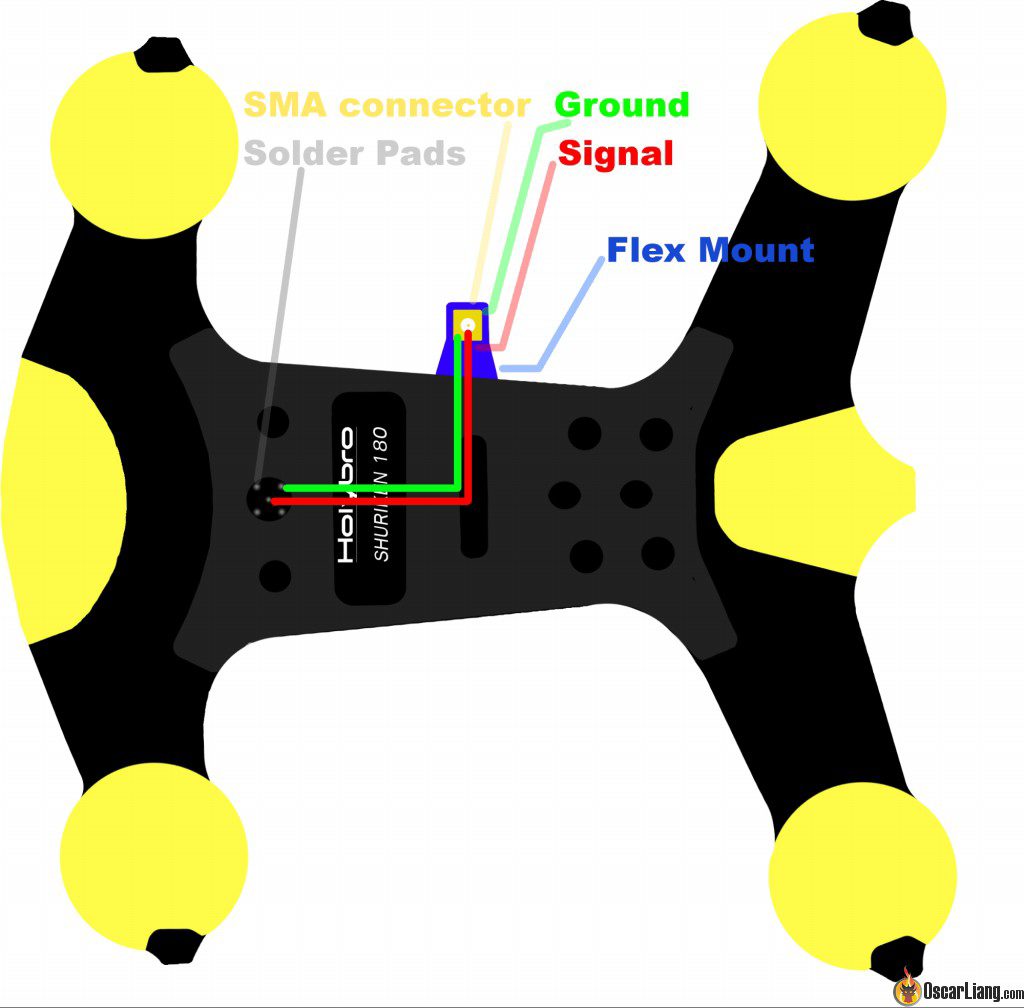 I did try some DAL tri-blade 4045 BN props, and it caused the motors to get a lot hotter than the flimsier 4030 tri-blade props that they supplied. I’d suggest that you not get the BN versions of the DAL props if you do decide to try some as an upgrade unless you are willing to risk it for better performance.

Cost of flying (and crashing)

I did a lot of flying and crashing, and did not go through any antennas (though I did have to shorten the supplied antenna to repair it). I ruined two of the supplied props, and a DAL prop after several crashes. So it does not really cost much in props however this is of course subjective to where and how you fly.

I nearly killed my battery several times, but always re-positioned it after a crash to avoid it getting cut on the edge. I used the smaller supplied battery strap that goes through the frame, and a bigger strap that came with it to strap all the way around the frame and battery. It really helped to keep the battery centered.

This quadcopter breaks a lot less than my other quadcopters with DIY frames made from aluminium or wood, and so it is probably the cheapest thing that I fly. The frame protects about everything really well, and the props don’t cost much. So I was really not afraid to try things with this mini-quad that I would never even consider with my other quadcopters, like flying through gaps in a tree or trying flips and smaller gaps.

When you take it out of the case and set it up, it feels like a really doctile quadcopter compared to most in the sub 250 category. However even with that said I did notice just how easy it was to do tight flips in any direction, while still being very easy to control in horizon mode. I felt comfortable enough with the quadcopter out of the box to try some flips and gates on my first battery.

There was one problem that I did notice when flying and attempting a flip or punch out in horizon mode on the last bit of a battery. And that was that the voltage would sag just enough to (I assume) enable some LVC feature on one or more ESCs, that would mess up stabilization to the point that the quadcopter would be uncontrollable.

I did recreate the problem and record some blackbox data from it. I will upload my blackbox data file here, if anyone wants to take a look at it. This problem was hard to recreate so I assume it could be a loose battery connector (which I did get from a crash and attempting to spread the pins), or voltage sag in the battery.

With default settings, it was a little too ‘high spirited’ for indoor flight. Alhough I did do some laps in a smaller basketball gym (60’x40’ room) with no problems. After adjusting curves on my Taranis I found it really easy to control and fly indoor. Even did some rounds around the building, and through hallways with little trouble except some snow in my FPV feed.

It handles wind really good. Not sure whether this is due to the thinner design or the thrust to weight ratio. But whatever the reason is, it handled 8Mph wind as if there were none. I have also flown it just fine in out average 17mph winds without much problem. It was very fun to zip around through trees, makeshift pool noodle gates, under volleyball nets, and through a 20’x60’ tent while flying in a pretty much wide open field.

I think this would be the perfect quadcopter for someone looking to buy a fast and fun multirotor. It will give them the maximum time in the air, without all of the downtime associated with crashing and repairing.

The simple yet strong frame design protects about everything inside. I’ve ran it head on into a metal pole with no internal damage, and just a cracked camera mount from the shock. The price is better than about any build of similar quality and it is almost bind and fly.

,Other than these few and smaller things I really did not see anything else I’d personally like to see changed. The overall design and construction were great and did not really leave much to be desired. The flight characteristics, cost, parts availability and rugged design were better than most products I’ve seen. The Holybro Shuriken 180 is definitely near the top in affordable BNF racers.

Hi Oscar. The link in this article to the video for minimosd is no longer working. Do you by any chance have the video available elsewhere?

Trying to find out where to hook up led lights on board,just so they come on when you plug battery in and also the 180 pro comes with a cord wia small 4 pin connector on one end a button in the middle and splits off into male and female connector at other end.Is this to do camera settings,where does it plug in and how does it work.

4045 bn overheating the motors? are you sure it’s not from a bad tune?

sorry i don’t use DX6 or any Spektrum stuff…

Do you know what version of betaflight to load onto the fc?

Hi George,
Great review. Do you know how to set up telemetry for this quad. Can it do it? Can we monitor battery etc.