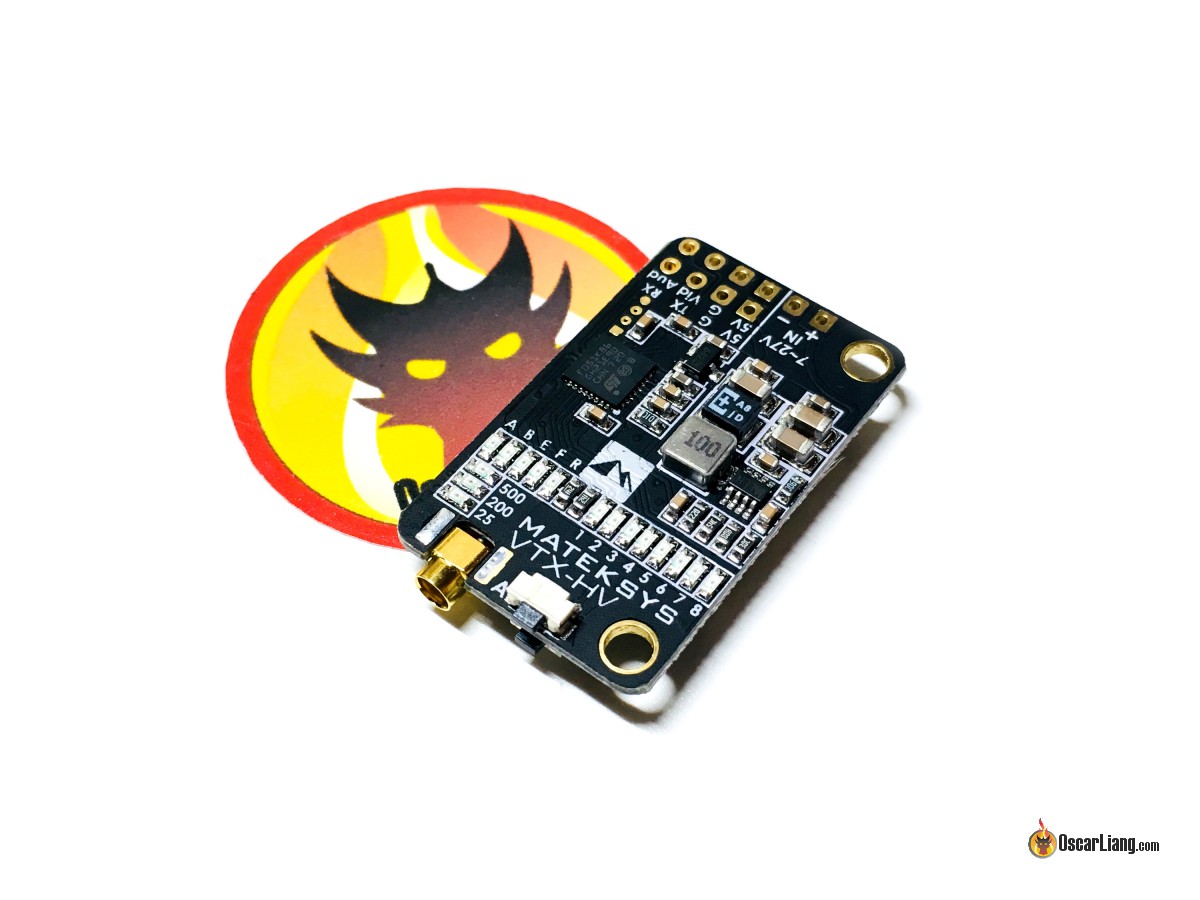 The Matek HV VTX has been out for months, I’ve always wanted to give it a try because of the tempting spec, features and price. Finally we got one in for a review!

The Matek HV video transmitter comes with nothing but the VTX itself and a MMCX to SMA pigtail. 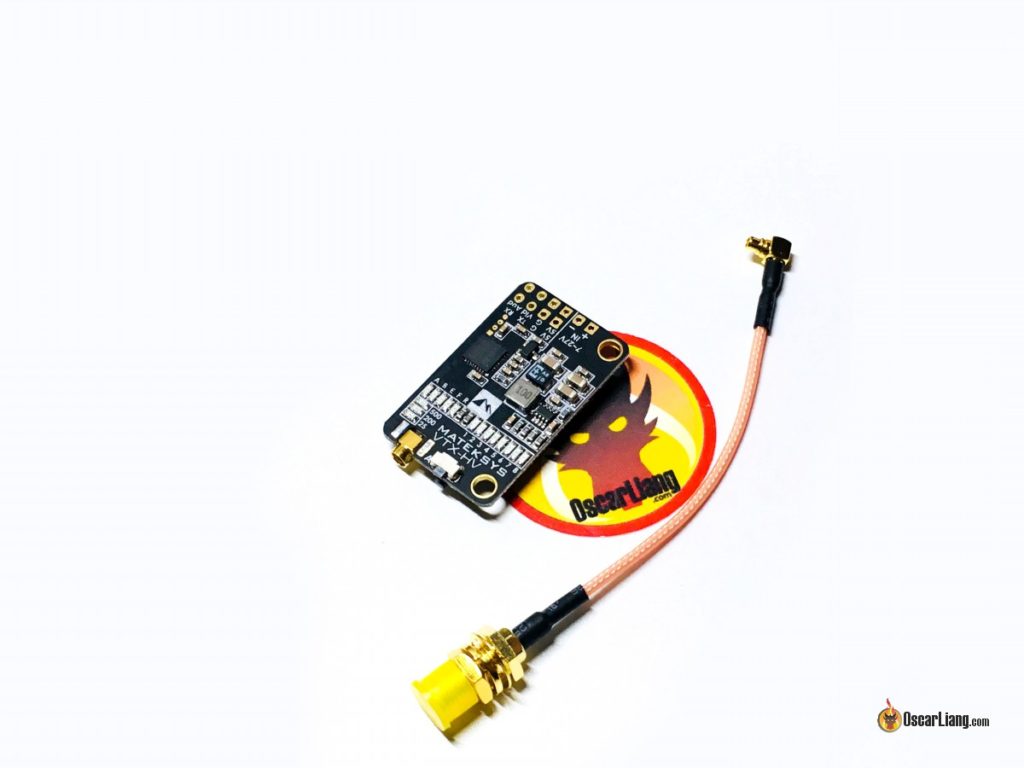 Further Reading: How to choose VTX for Racing Drone?

This is a very impressive VTX, it’s got almost all the features I want on a VTX, and it’s cheaper than the Tramp HV and the Unify Pro HV at only $30.

The Matek HV VTX has a rectangular shape and two M3 screws holes that are 30.5mm apart, this allows you to stack it on top of your flight controller.

However in terms of size it’s not as compact as the Tramp or Unify Pro. Therefore if you have a tight build or low profile frame, you might not be able to take advantage of the “stackable” feature, even have trouble fitting the VTX in the quad.

To change settings, most people would use Betaflight OSD or Taranis LUA script via Tramp Telemetry. But I am glad to see there are two physical push buttons (A and B) for changing settings just as a back up method.

The excellent LED indicators for channel, band and power are another nice touch! Very easy to understand than single digit LED display. 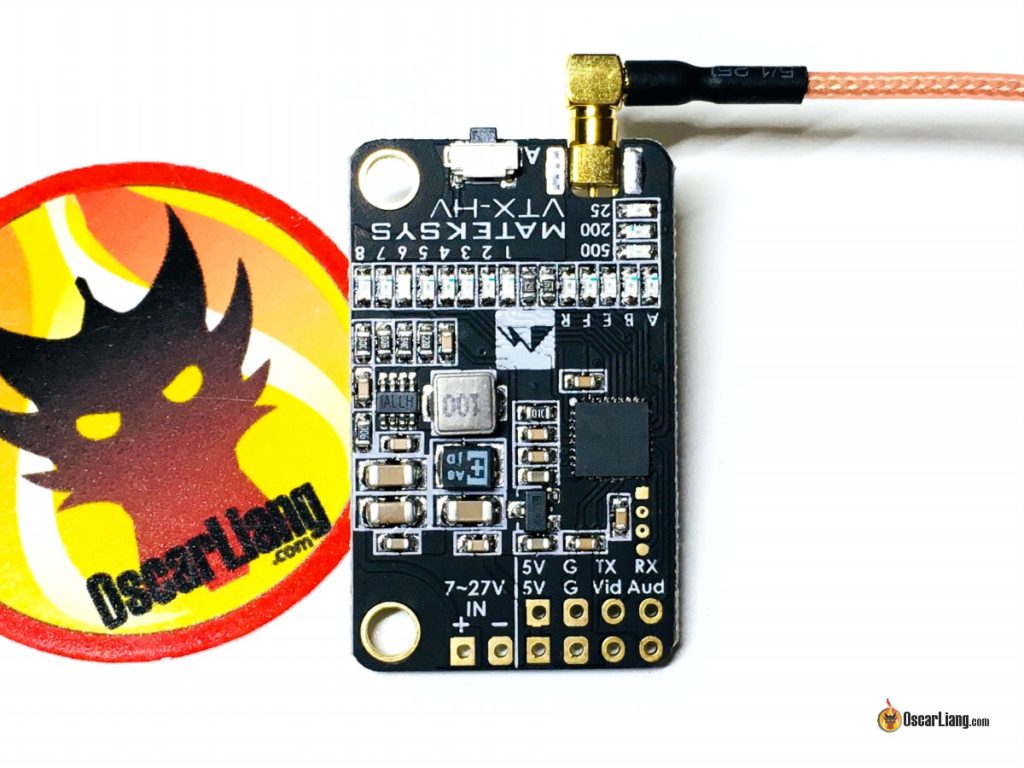 The Matek HV VTX uses solder pads rather than the common plastic JST connector, so you can directly solder wires on the VTX, but I wish they’ve included some silicone wires! 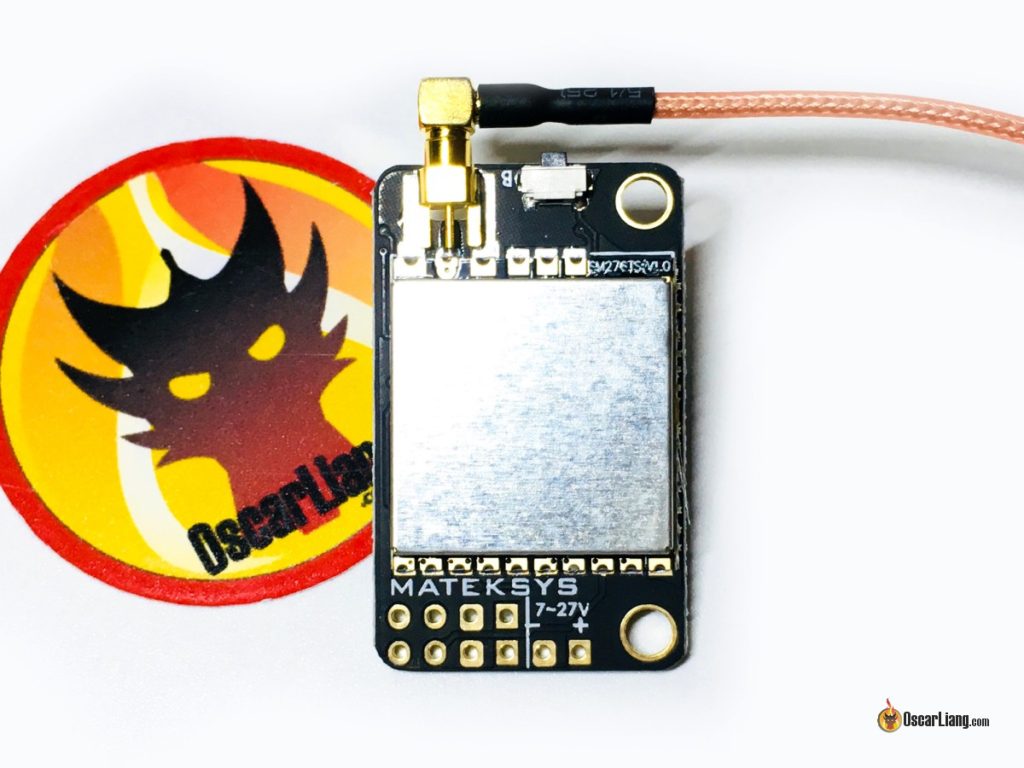 The MMCX to SMA connector pigtail is 70mm long, and it weighs 4.6g alone. The VTX alone weighs 5.9g. 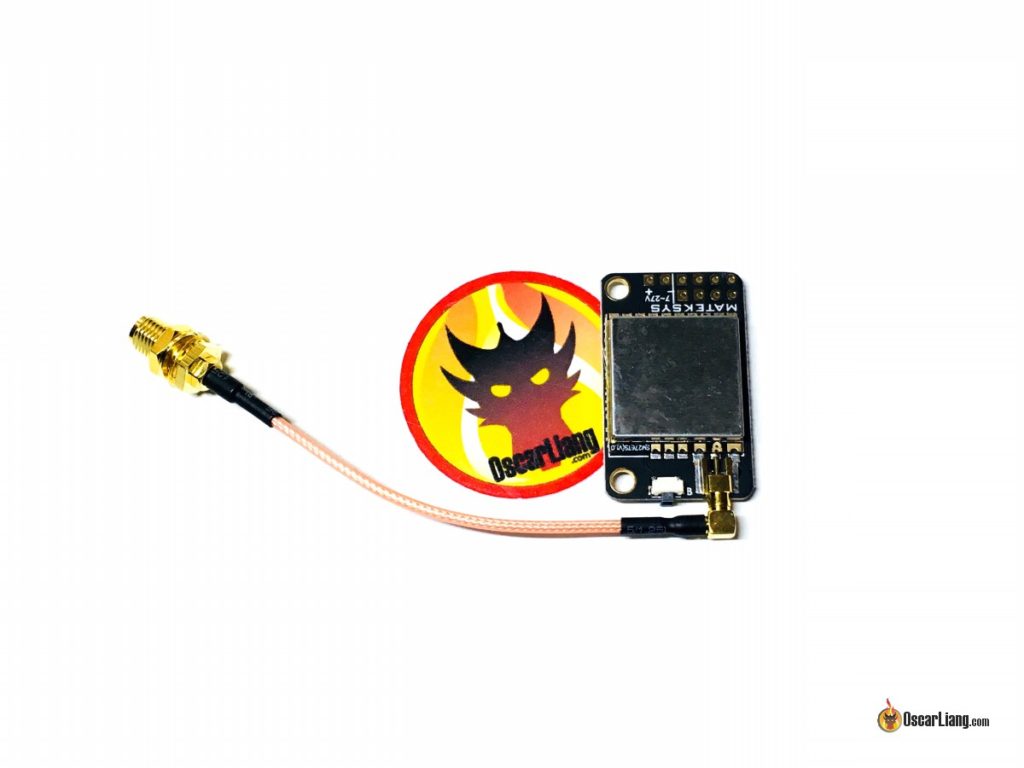 The on-board BEC is a handy feature, the 500mA current rating is enough to power your FPV camera as well as your flight controller if required.

There is no built-in microphone, but if you want audio during FPV, you will have to get an external mic or use an FPV camera with built-in mic. 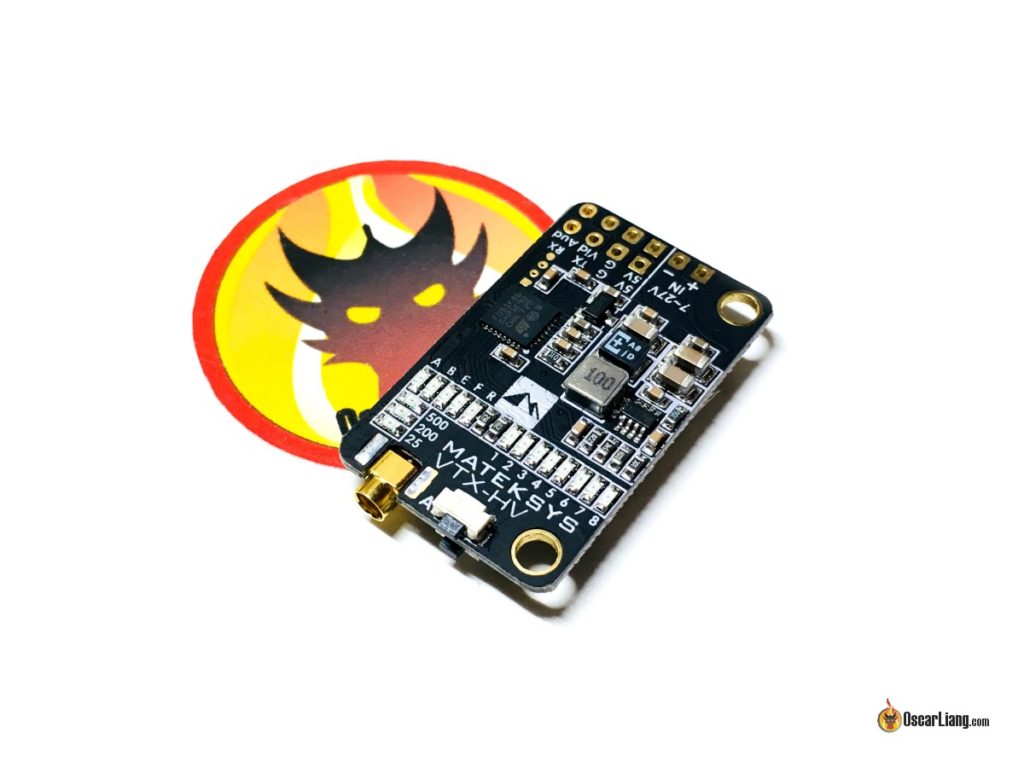 The Matek HV VTX can be mounted directly on top of the FC like so, and you can probably use shorter standoffs to achieve a lower stack than what I am showing you here. 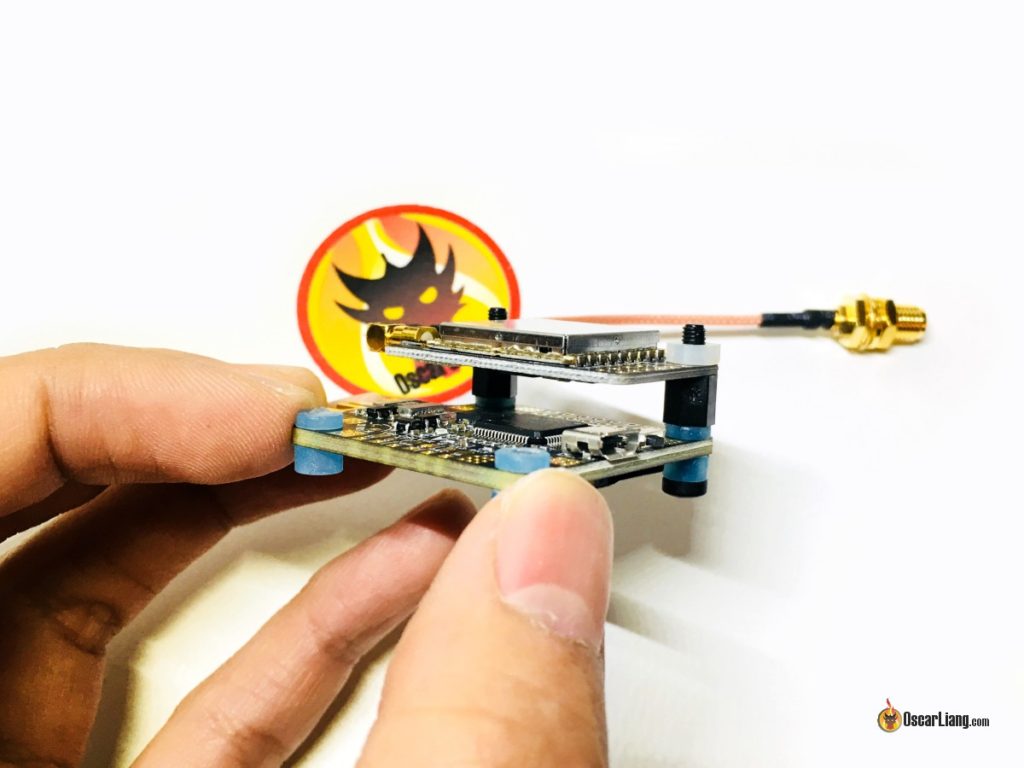 Beware that not all frames are going to fit an extra board in the FC stack, especially if you are already planning to use a PDB or 4in1 ESC in the quadcopter. 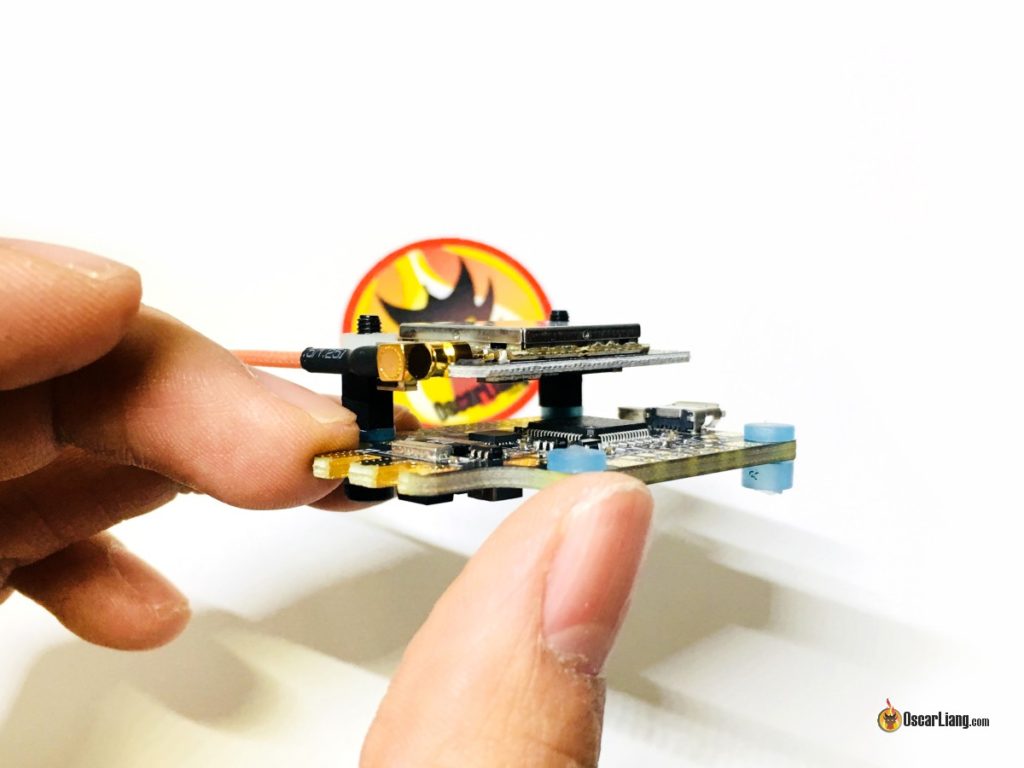 I will be testing this VTX on a new build in the coming weeks, and I will update this post if I have any issues or findings in the future.

You say “The on-board BEC is a handy feature, the 500mA current rating”
Yet the spec says BEC 5V 1A, which is correct please?

They’ve probably made the change after my review.

Hi! When i try to switch to either 200 or 500mw, both the 200 and 500 LED light up, so it is unclear if it is transmitting on either of the higher powers. I’m using the buttons, not smart audio. Anyone else experiencing this?

Do you have Smart Audio setup? Check there to confirm perhaps?

Run this VTX for a while and only 3 issues found. None of them deal breakers for regular use.

1) The MMCX connector has a weak grip on the aerial and can pop off more easily than other units. Easy to solder a replacement MMCX connection.

2) I’ve had a couple units lose the A of B buttons (no issue if always using tramp for channel switching).

3) If you lose the ground connection for any reason and the HV wire is still connected, the unit will source ground through TX4 if connected (which will usually fry the attached FC)>

Overall it is great VTX.

Can this VTX run without antenna like the TBS unify?

Hi, could you help me maybe it is simple but I’m not able to find nowhere where to connect mic output from runcam. Thanks

Connect the Mic output to the pin “AUD” on the VTX.

How can I check what firmware version my Matek Vtx is running??

Is it possible to connect directly the audio cable from the camera to the vtx?

have you tried to update the firmware of this vTx using the BetaFlight passthrough method? I’ve tried without success :(

Please help. No instructions on how to connect mic input from roto riot camera. Can’t find help anywhere. How do I connect the white audio wire from the camera to the trx?

Thank you for your help,

I like to know how to connect a mic to the vtx as well.

What are you finding so difficult? Mic is one wire (assuming ground is already connected). You solder a wire from the mic output on camera to the audio input on the vtx… there’s nothing more complicated about it than that.

When you have articles that end like this one is it possible to re-post them at the top of the article list? You have any articles like this that I would love to hear your hands on feedback, but I forget to check back and only new articles show up in my RSS feed.

Yes whenever I have major updates on an article I always move them to the top of “latest posts”. thanks for checking :)