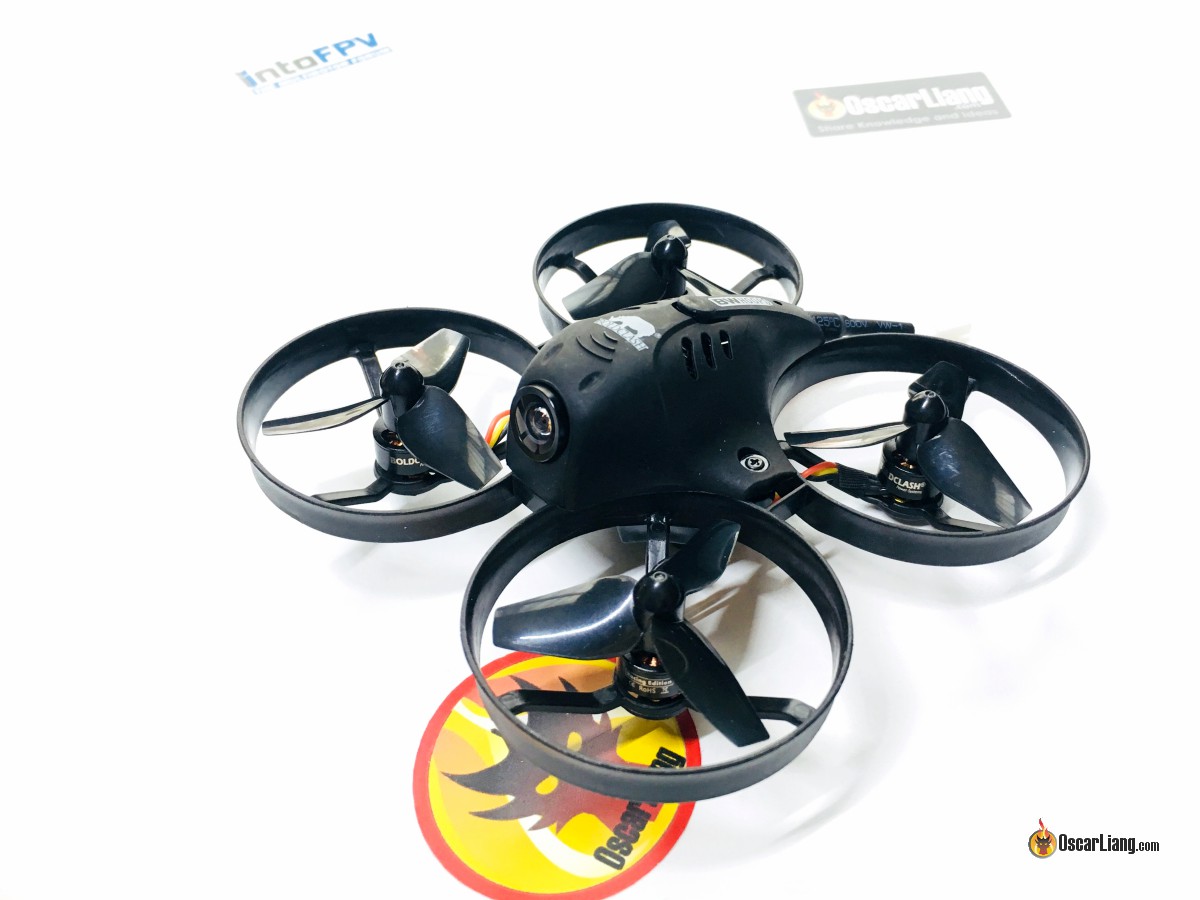 The BWhoop B06 micro quad is made by BoldClash. Similar to the famous Tiny Whoop, all the propellers are protected by ducts on the BWhoop so you don’t need to worry about crashing, but it’s bigger and more powerful.

The BWhoop is bigger than the Tiny Whoop and using larger 40mm propellers rather than 31mm.

The BWhoop B06 also uses brushless motors rather than brushed motors. Brushed motors is known to burn out easily, and if not, they do wear out after about 10 hours of flight time in average.

Spec and Features of the B06

The B06 comes in a really nice plastic box, perfect as a traveling case, or storage box. Inside the box we have: 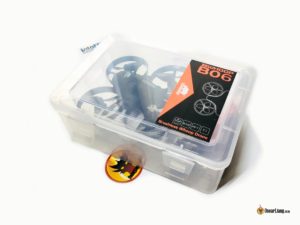 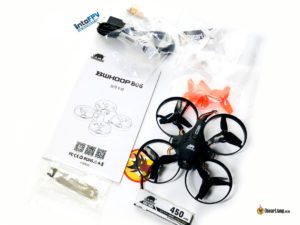 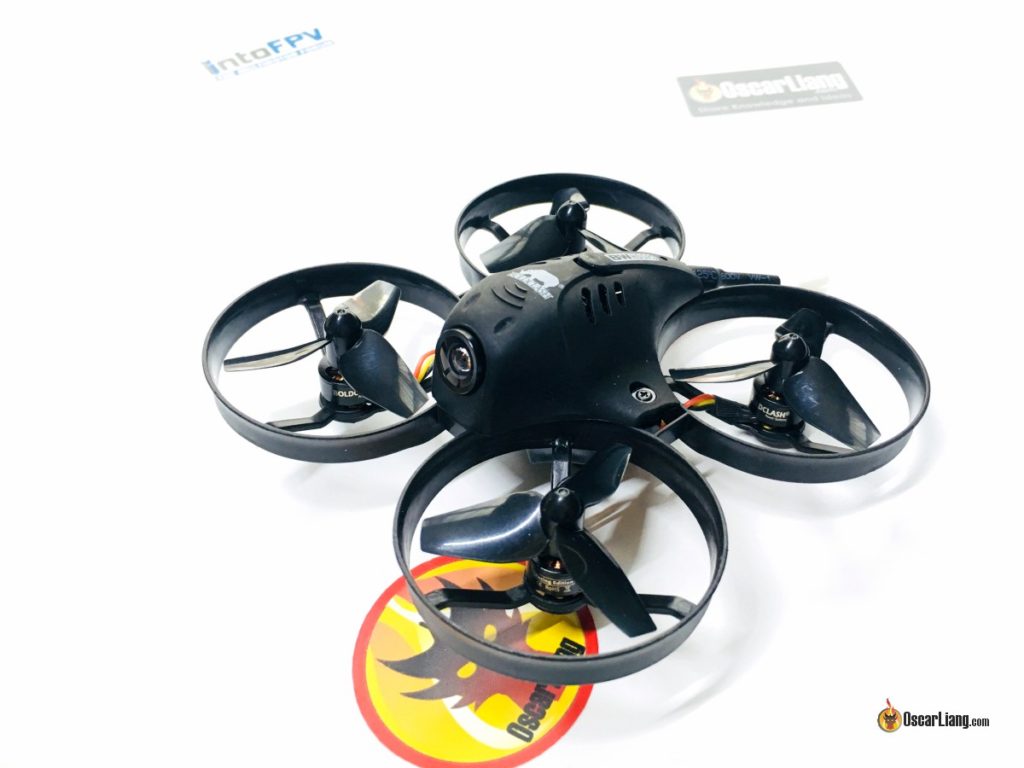 A Closer Look at the BWhoop B06 Micro Quad

Motor to motor distance is 77mm and the quad weighs at 28g without battery. The overall design is really nice, the FPV system and the rest of the electronics are very well protected under the canopy, and it looks great.

The BWhoop is a bigger than the traditional Tiny Whoop due to the larger 40mm propellers. But I find this motor and propeller combination more efficient and powerful in my testing. 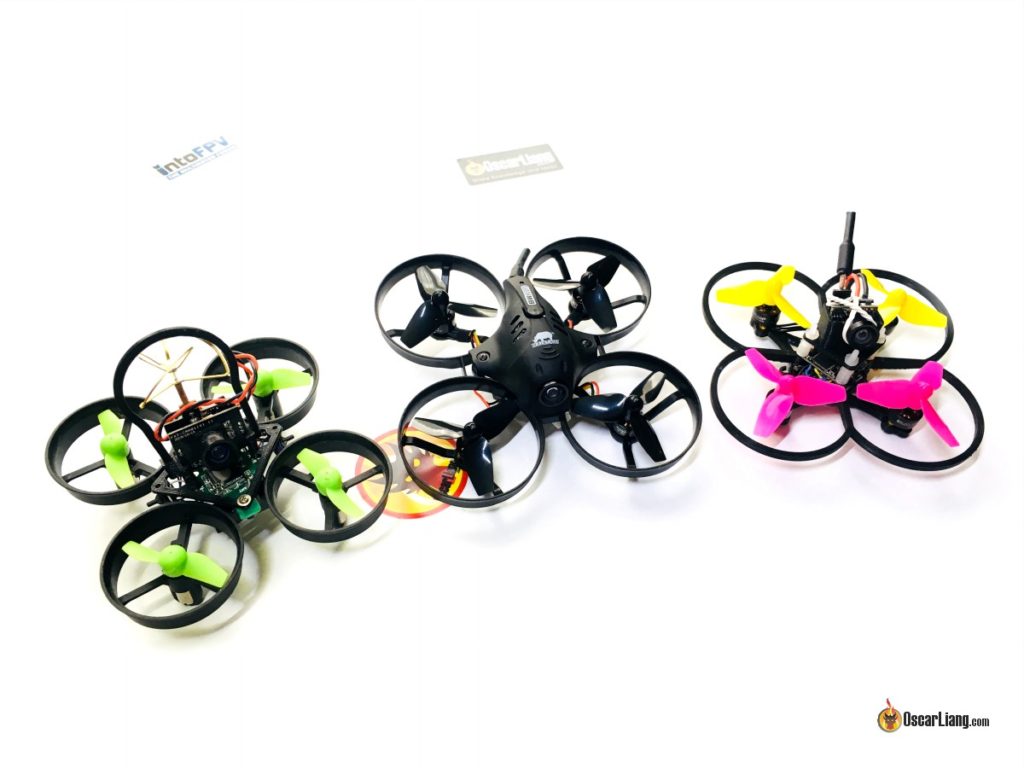 The quad is pre-flashed with Betaflight 3.1.6, and the ESC’s are BLHeli ESC (not BLHeli_S) so you can only run Oneshot125 with them. If you want to update the firmware on the flight controller, please select SPRacing F3 board.

The FC is soft-mounted to reduce vibration caused by the motors. 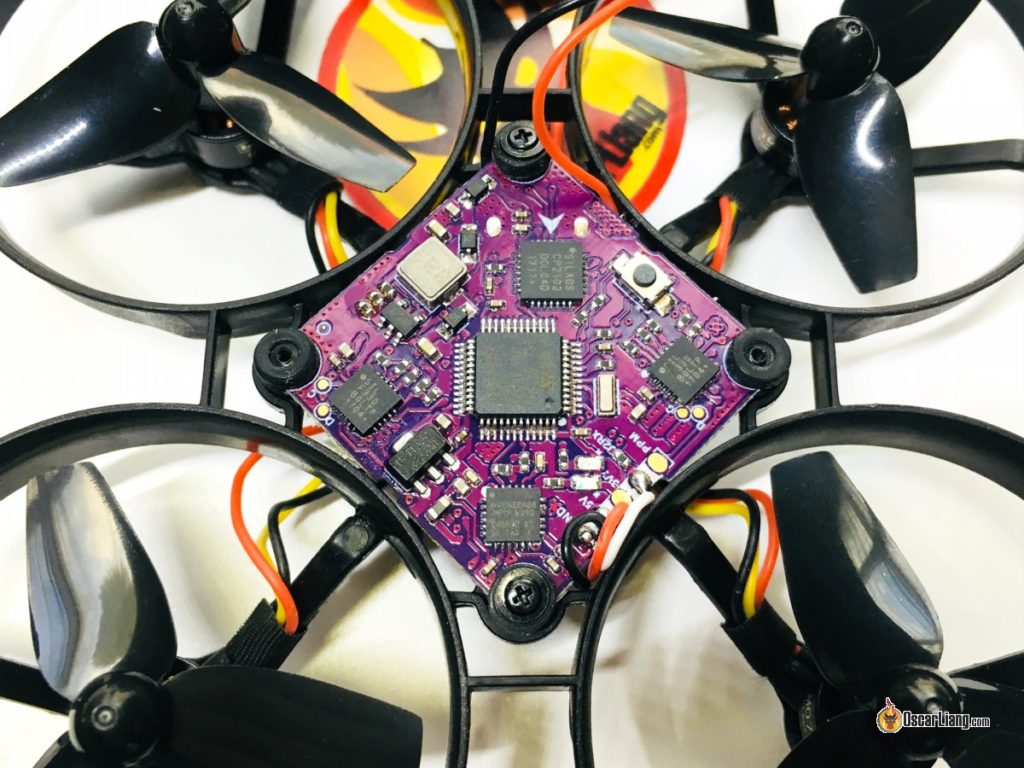 The radio receiver is located on the bottom of the FC.

There are many options for radio receivers when purchasing this quad, including Flysky, Futaba and Specktrum. Mine comes with the Frsky XM receiver pre-installed. 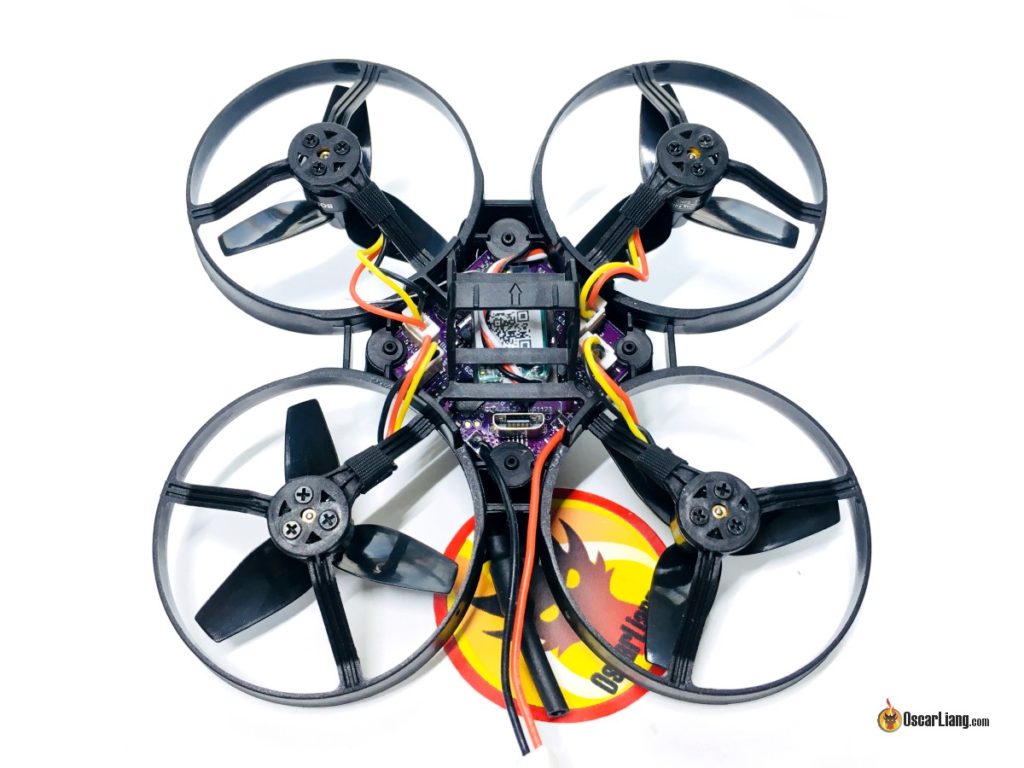 Brushless motors require ESC to work, and the ESC’s are built into the flight controller. The design and layout of the FC are great, the motors can be plugged into the FC with solder-free connectors, and the USB port can be easily accessed from the bottom of the FC for connecting to Betaflight configurator. 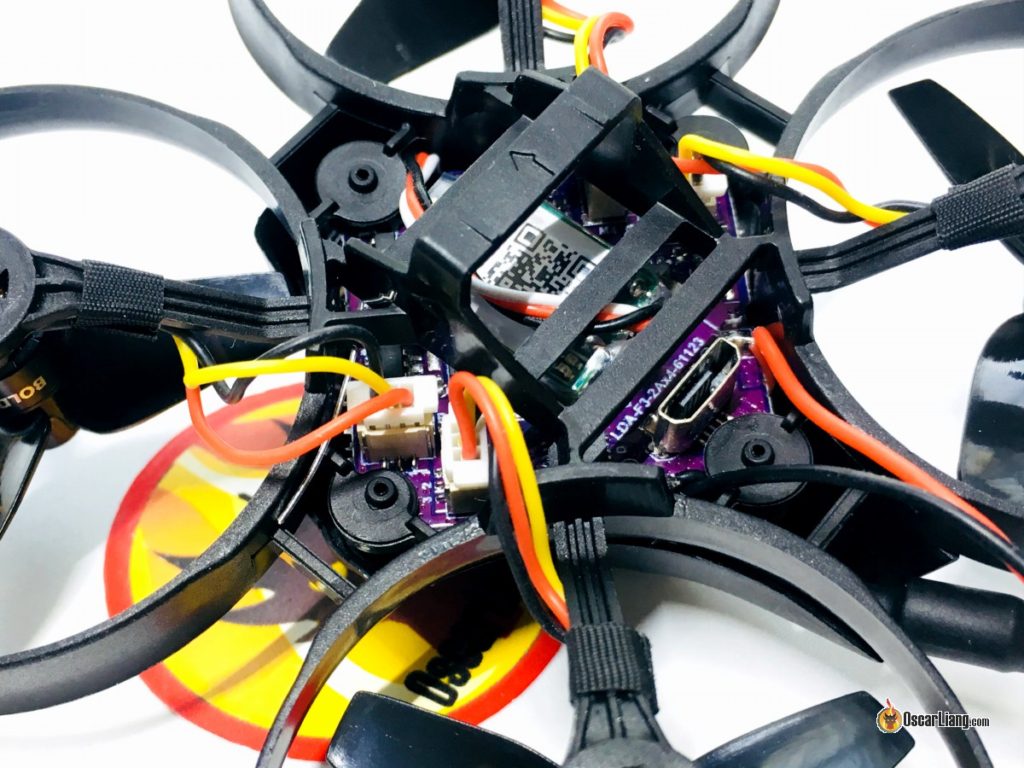 Battery connector is the 2 pin JST PH (2mm), same as the one used on the Eachine E010. I wish they could’ve used LOSI instead, as LOSI connectors are more common in batteries of this size. But it’s easy enough to make an adapter if required, or simply replace the battery connector. 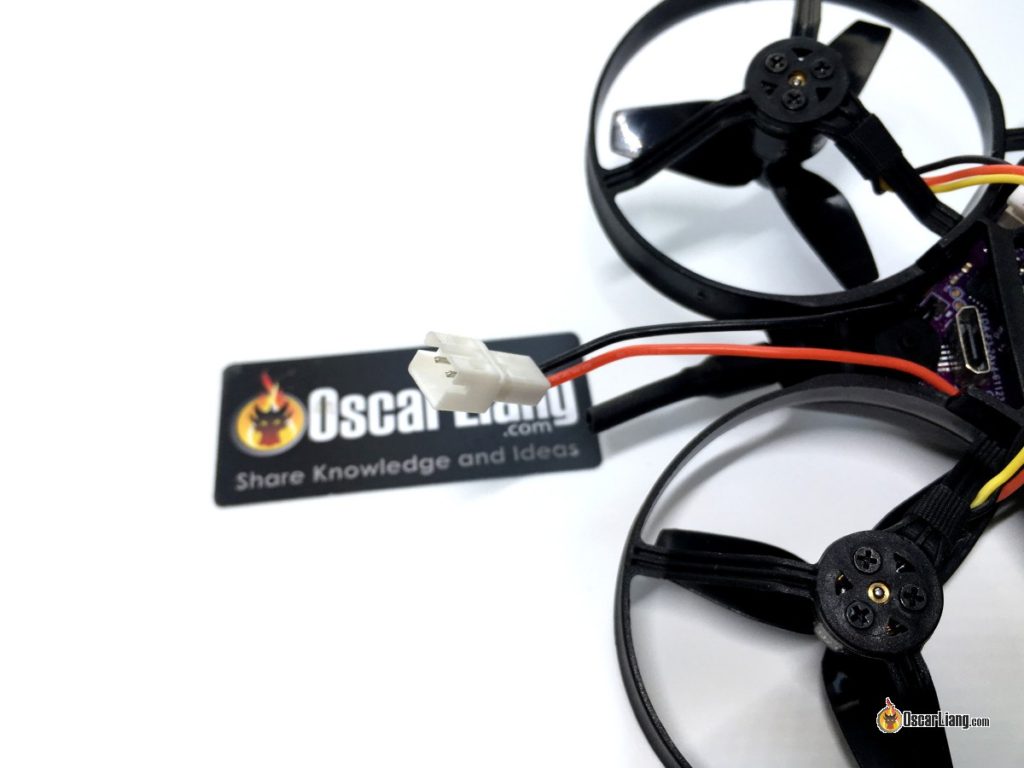 The motors are Boldclash 0703 15000KV motors, which are made in the same factory as the Racerstar BR0703, that’s why they have the same design, just different branding.

The ducts are a bit flexible but strong enough to protect the props in crashes. 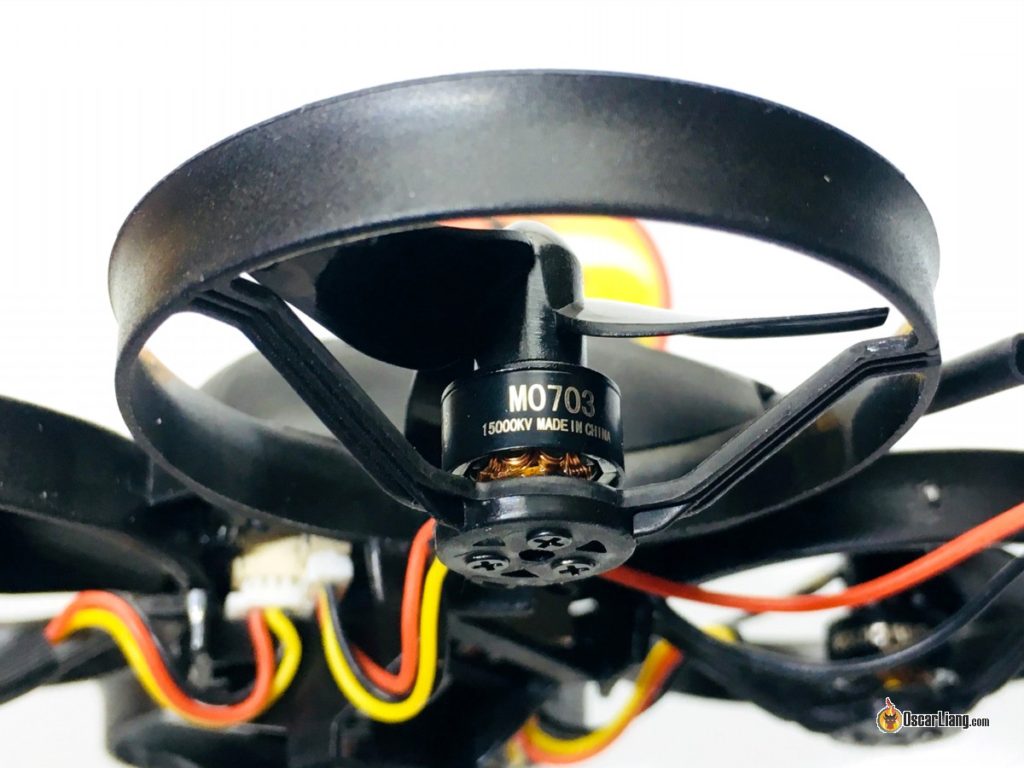 By removing the 2 screws on the canopy, we can easily take it off.

The FPV system (VTX and camera) is installed right under the canopy, and it’s connected to the FC by a JST connector for power. 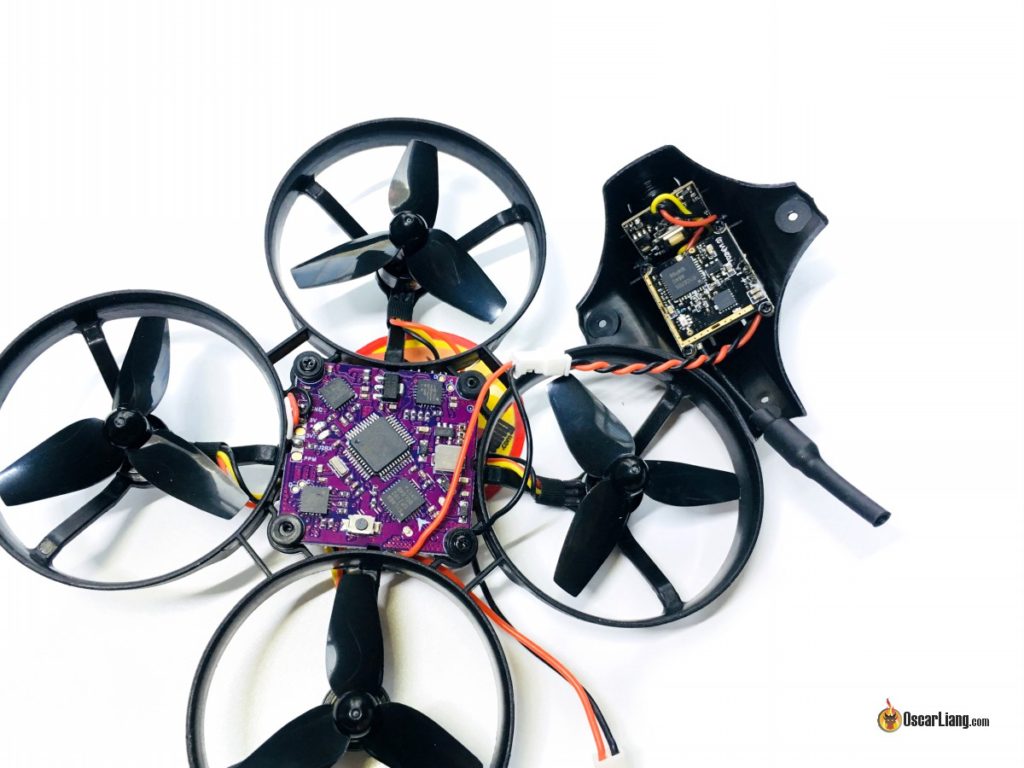 You can change VTX channel and band by pressing the button on the canopy.

On the back of the camera there is a button to change NTSC/PAL setting. I wish they could make the antenna pointing upward vertically which could make the signal more reliable. At the moment the signal gets really weak when the quad points away from the pilot.

(What to know why? check out our guide on FPV antenna) 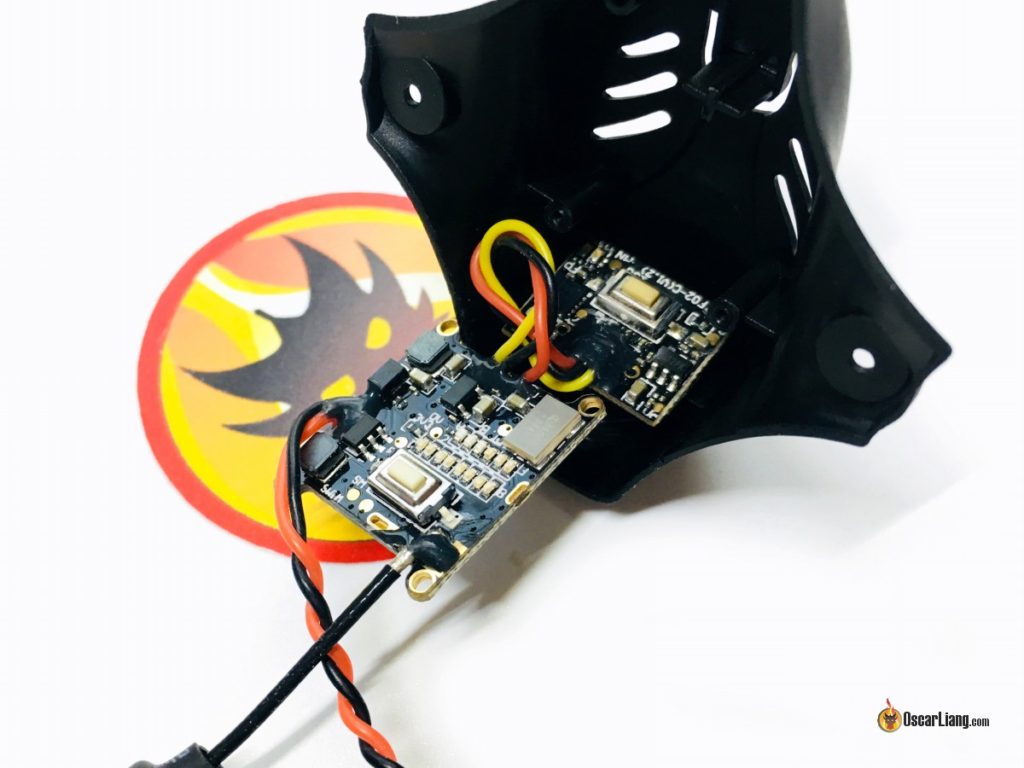 It’s such a coincidence that I am recently also looking into building a 1S brushless micro quad, I have been testing 0703 and 0705 motors too, so it would be interesting to compare this quad with the ones I have built.

Here is my build log of the Angry Oskie, a 1S brushelss micro quad. 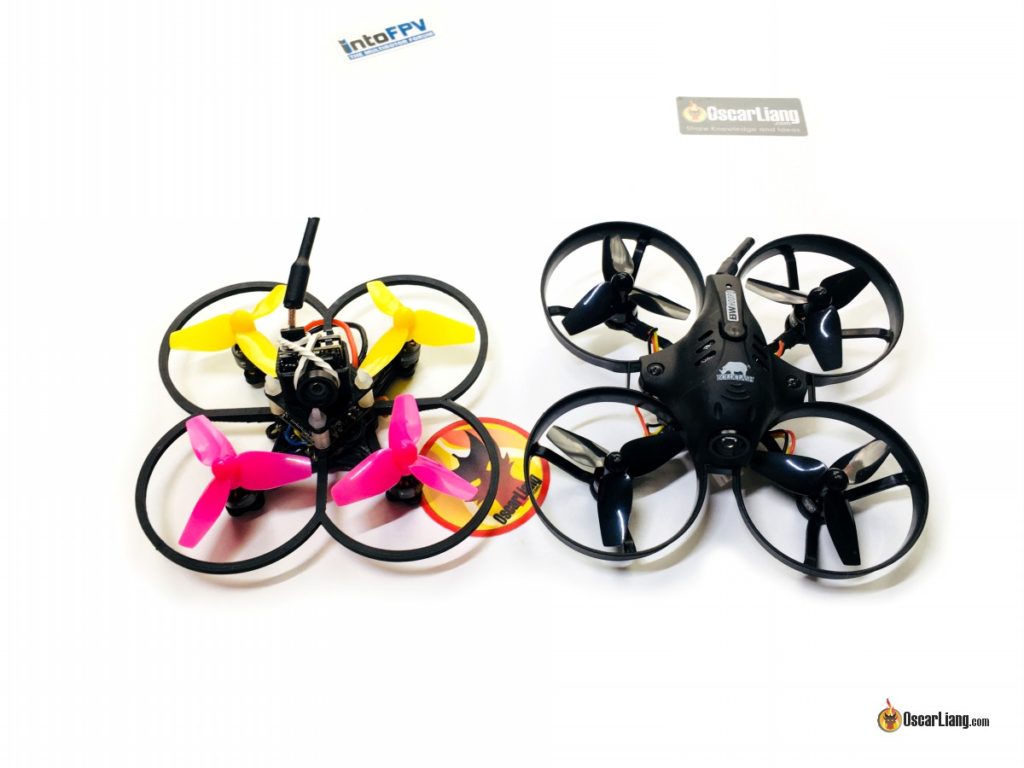 The manual is well written, by following the instructions should get you flying in no time. Here I will outline what I did to set mine up.

I’ve flown this quad indoor a few times now, it performs exceptionally well and I am well impressed.

The battery says 80C on the label, I call that BS yet it has more punch than my Eachine 500mAh 40C and have about the same flight time. That’s a very good battery overall despite the questionable C rating.

Everything is plug and play and no soldering needed. The quad has lots of power, yet being very efficient and has over 4 mins of flight time with the stock battery.

It actually flies a lot quieter than I expected, I would say the noise level is similar to a Tiny Whoop. I don’t know exactly why my self-built brushless micro is so much noisier, maybe something to do with the motors, or soft-mounting the FC actually makes a big difference in these micro quad too.

I will try it outdoor, take some footage, and come back for a more detail update soon.

How can you tell if your model is the welded one?

Hi! I am having problem with Betaflight not recognising my receiver (FRSKY) – I have tried upgrading to the latest version but still no receiver contactl. I can bind the receiver with my Taranis Qx7 but the signal does not seem to reach the SPRACING F3 board. Can you send me a copy of your CLI DIFF printout so that I can see what I may have done through Betaflight to “disconnect” the receiver from the F3 board.
Thank you.
Robert COTE

Anyone know what connectors are on the motors?

Wow those motors fell apart fast! Before 3 batteries were up the top popped off of one motor and the bearing vanished. Looks like the replacement bearings aren’t even available yet in china. Anyone have any suggestions on how to repair these / better motors / how to keep the motors from flying apart?

White boldclash and ask for new motors.. they have since fixed the issue with a laserwelder.
I just received with a tiny weld on the axels

I am wondering if you think this thing is 3D-able? I’ve been looking for a brushless indoor 3D flyer for a while and after reading your great guide on how to set up 3D in betaflight/blheli I wonder if this quad could be a choice? Finding out if motors support reversible setting in BLheli is beyond what I am able to find online usually… This tiny quad looks very interesting and maybe I’ll buy one even if it doesn’t support 3D. Your review made me want to buy it :)

My BWhoop has horrible drift in angle mode, even installed INAV for 6 point accelerometer calibration, but no help

check if the FC is mounted leveled? maybe remove the screws and check. Mine flies beautifully and extremely stable…

Is it as controllable as a Tiny Whoop indoors? Under chairs, tables, etc?

Yes! it’s extremely stable, flies very similar to a tiny whoop, just more powerful. I need to edit and upload some footage when I have time.

Great review waiting on the dsm one, any chance on modding the fpv antennae? To a more vertical angle?

I’d imagine that carving a bit of the tail out of the shell, and a dab of hot glue could get a more vertical angle for that antenna. I don’t really see the need myself (now that I have successfully untangled the differing channel names between all my gear…), but it seems like it should work.