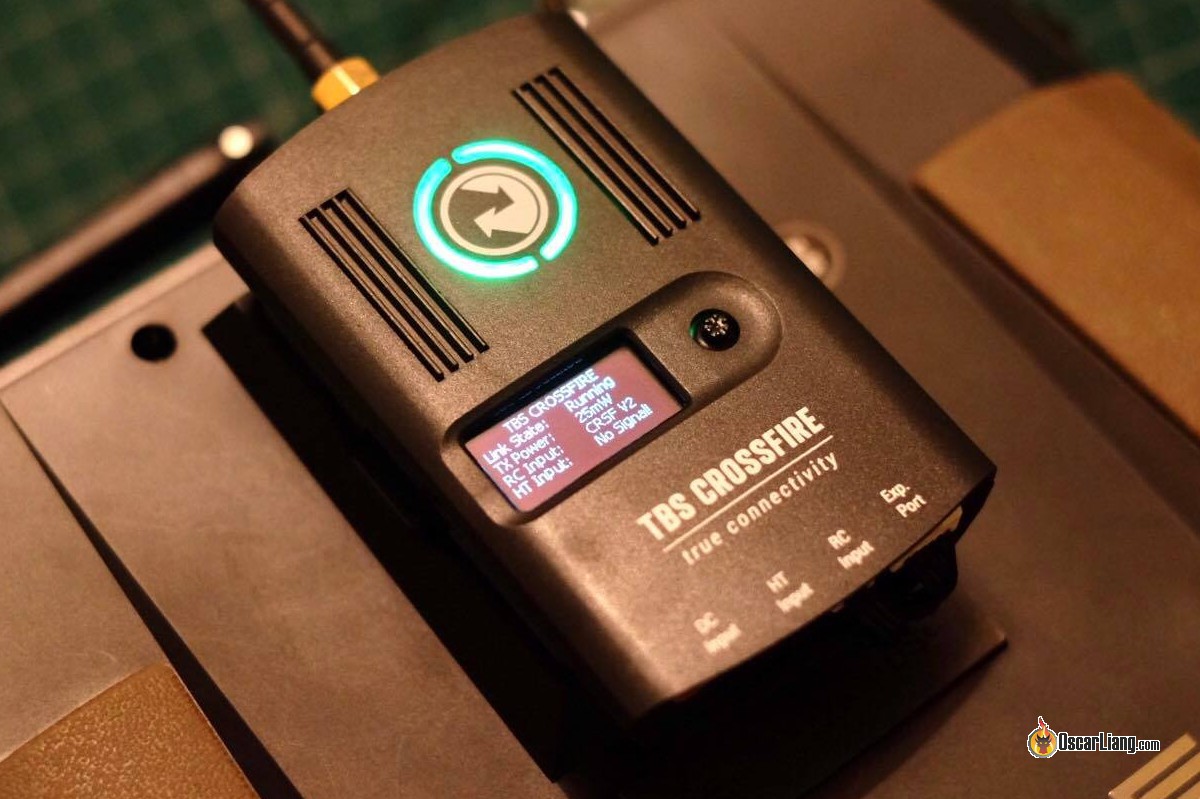 I will show you how to setup SBUS on Crossfire receiver in Betaflight. It has more latency than CRSF protocol, but this is useful when you don’t have a full UART on the FC. only the RX pin.

Why Using SBUS on Crossfire Receivers?

You might wonder, “isn’t Crossfire faster than SBUS? Why would you still want to use it?” Well yes, you should use CRSF  over SBUS whenever possible. Crossfire requires both RX and TX pins of a UART while SBUS only needs the RX pin. When you don’t have a spare UART that then your next option would be using SBUS.

If you are new to Crossfire, make sure to check out my guide on How to Setup Crossfire in Betaflight.

This solution would come in handy especially when you are short in UART’s. You can use the RX pin for SBUS, then turn the TX into Softserial and use it for something else like SmartAudio.

It’s not going to affect range because they are only different receiver protocols. And note that you will also lose telemetry apart from RSSI, and you won’t be able to use LUA script.

However, beware that using Crossfire with SBUS results in worse latency as measured in this test than CRSF protocol.

Simply connect Channel 1 of the Receiver, to the RX pin of a spare UART on the FC.

Because the SBUS signal from the Crossfire receiver is “uninverted” (while Frsky SBUS is inverted), so if you are using F4 FC, make sure the UART you’re using is not inverted. If the pin is labeled as “SBUS” it’s probably inverted. On F3/F7, it doesn’t matter which UART you use, all UART’s should be uninverted on these boards.

On your Taranis, Execute the Crossfire LUA script.

If you wish, you can pass RSSI value through one of the spare channels, for example, Dst.Ch. 8. This article explains the differences between RSSI and LQ.

Now you can setup SBUS in Betaflight just like you would normal do with Frsky’s receivers.

Go to the Ports tab in BetaFlight Configurator, enable SBUS for the UART you are using. Ignore SmartPort because you don’t have that. 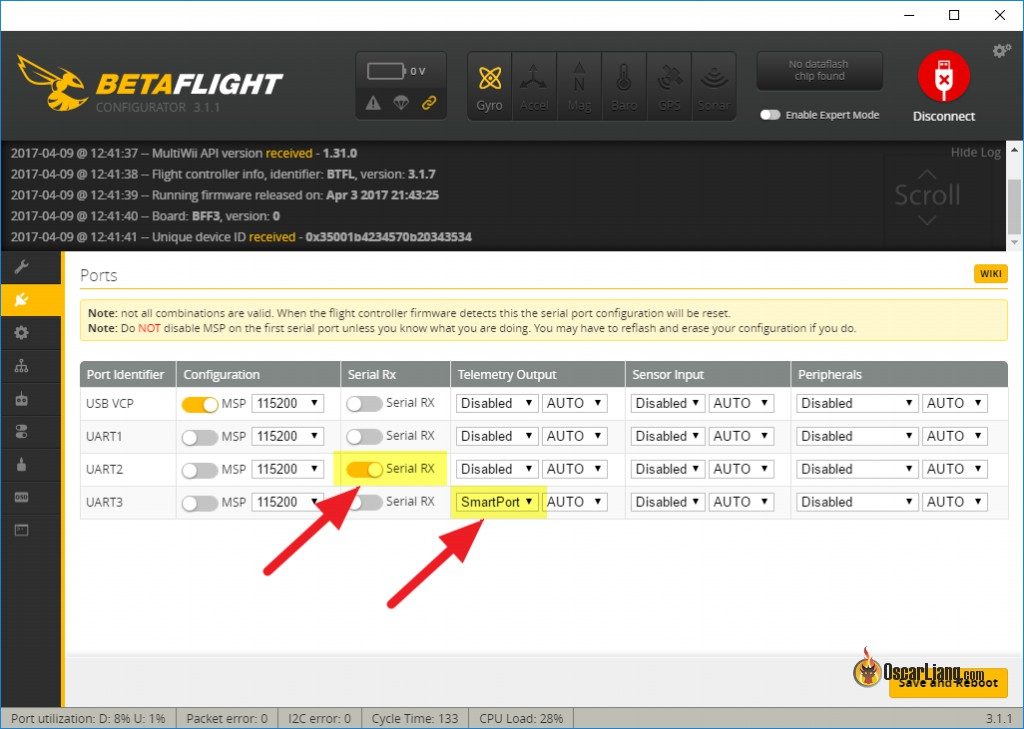 Go to the Configurations tab, and set receiver to “Serial based receiver”, and in the second box select “SBUS”. If you are getting RSSI value from the receiver, you need to enable “Telemetry” feature too, otherwise you are done! 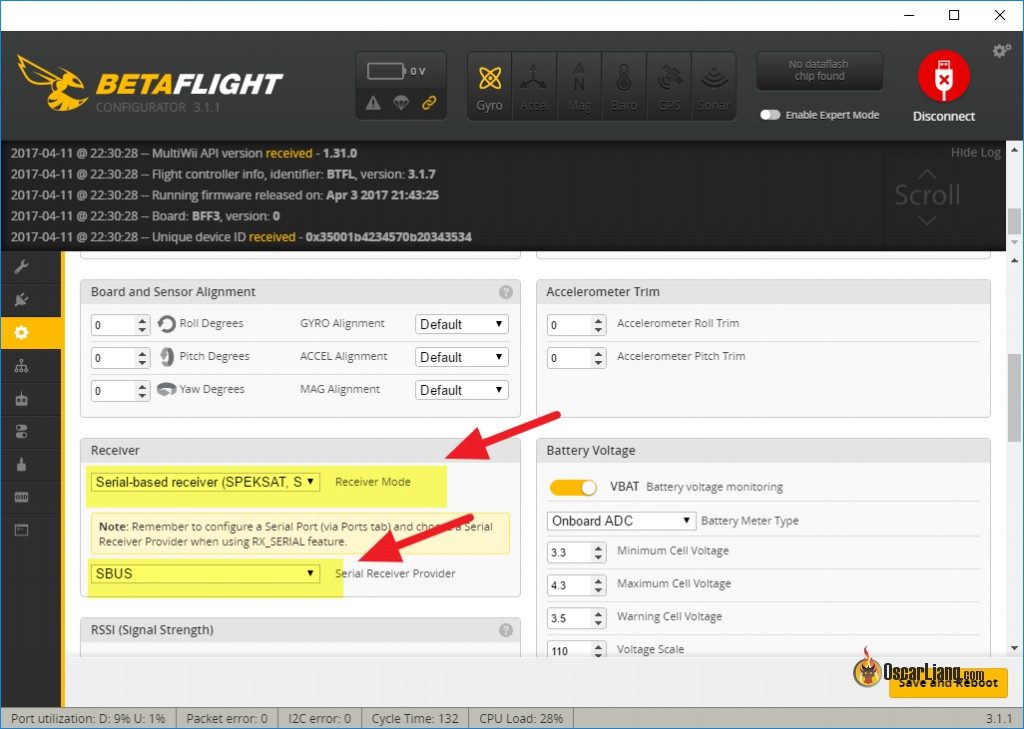 If you are getting RSSI from the receiver, select the channel for that in “RSSI Channel” in the Receiver’s tab. For Dst.Ch8, that’s AUX 8, for Dst.Ch4, that’s AUX 4.

You can display this value in Betaflight OSD.

That’s it! I hope you find this tutorial useful.

Hi Oscar, finally I successfully connect crossfire with naza V2. Following your instructions and configuring naza with the DJI software to use sbus.

Thanks Oscar!! Can I use this post to connect a crossfire nano Rx to a naza v2? Is it possible? I am frustrating trying to use my old f450 with a crossfire?

I am not sure I don’t use Naza, but you can give it a try if it takes SBUS signal.

I heard the sbus protocol on crossfire nano is not 100% correctly implemented?

This is helpful. I’m planning on using TBS Crossfire now that FrSky/Jumper totally messed up R9. I have a Jumper T18 radio. The ACCST/ACCESS war among FrSky/Jumper/Radiomaster has been very annoying so I am phasing out FrSky through attrition. I’ve used the D8/D16 and R9 modules with telemetry in many of my builds.

Have you experimented with TBS Crossfire Mavlink support ? I understand CRSF telemetry is disabled if configured in SBUS mode. It’s not clear if I can take advantage of MAVLINK when configured in SBUS mode.
I’ve got a bunch of Sparky 2 controllers that work extremely well with D8/D9 and R900 receivers with telemetry enabled. Is it possible to configure Crossfire for SBUS to my FC RC input and MAP 2 Crossfire pins for Mavlink TX/RX ? If It’s not possible then I would need to drop the bluetooth interface I use in my airplanes that I use to upload flight plans and use the flex port for CRSF w/telemetry and setup the MAVLINK over wifi.
Has anyone tried using the INAV mission planner with a wifi connection to the TBS Crossfire Micro V2 transmitter ?
If it works I can drop the bluetooth interface on my new builds

Very interesting discussion. I am attempting to get SBUS output from an ELRS receiver, some say it is possible?

do this get telemetry?

Is it possible to obtain LQ information using this setup? I have managed to acquire RSSI but not LQ.

Dumb question: This manipulation only get the nano receiver to output sbus, correct ?

meaning that all the advantages of CRSF inbetween the emitter and the receiver are still there ?

In short, you still need the crossfire module in your emitter bay for this to work

Hi, thanks for this helpful article. I have another question regarding using crossfire with only one rx pin. I have only one sbus connection on my gofly cp90 and want to use smartaudio. I thought o fthe possibility to use a tbs unify nano vtx and connect it directly to the nano crossfire receiver (i.e. via channel 4 on the receiver). Will this work even if the receiver is only connected via SBUS (using only the sbus connection)? I guess I would have to set smartaudio only via the big crossfiire module connected to my spektrum then, right?
Thx a lot.

Keep in mind that SBUS on Crossfire is fixed at 50 Hz output and seems to have higher latency as well, unexplained by simple decrease in refresh rate.

BTW, you dont need both rx and tx pins for crsf, it works fine with just the rx, I can see this being useful if you have an inverted sbus pin already though

FPORT can also work as receive-only for that matter.

Thanks for the tip!