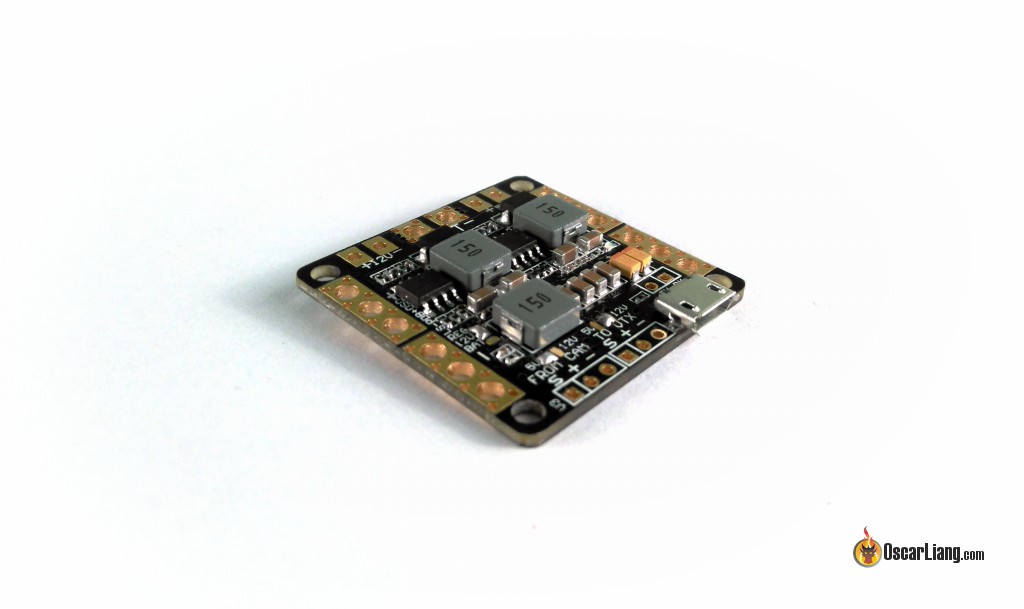 PDB (power distribution board) is used widely in mini quads, they make builds much simpler. This Arris PDB has dual BEC (5V and 12V) and LC-filter built in. What’s interesting is the integrated OSD that can overlay vital flight data: for example timer, voltage and mAh used from current sensor. It can also be used as a convenient tool for PID tuning in the field.

This PDB+OSD is provided by Arris Hobby, this review is written by Konrad.

According to the official specification, this PDB’s 5V BEC can supply up to 3A of current (rectifier diode DC-DC conversion). That means it can be used not only to power its OSD, FC, FPV equipment and receiver but also possibly enough for an HD camera such as a GoPro or Runcam.

PDB’s with built-in OSD can easily solve some of these problems, reduce wire clutter caused by multiple necessary connections (because they can test the whole setup in development). This one also has FTDI unit built in to make connection between OSD and PC much easier. My unit came with MWOSD 1.6 firmware pre-installed with default settings.

Let’s take a look at the layout of the board. There are + and – ESC pads placed on both sides of the board. They might cause a bit of wire crossing that could have be avoided by providing separate pads for every ESC. But these two larger copper pads will act as a heatsink to keep whole PDB cooler. 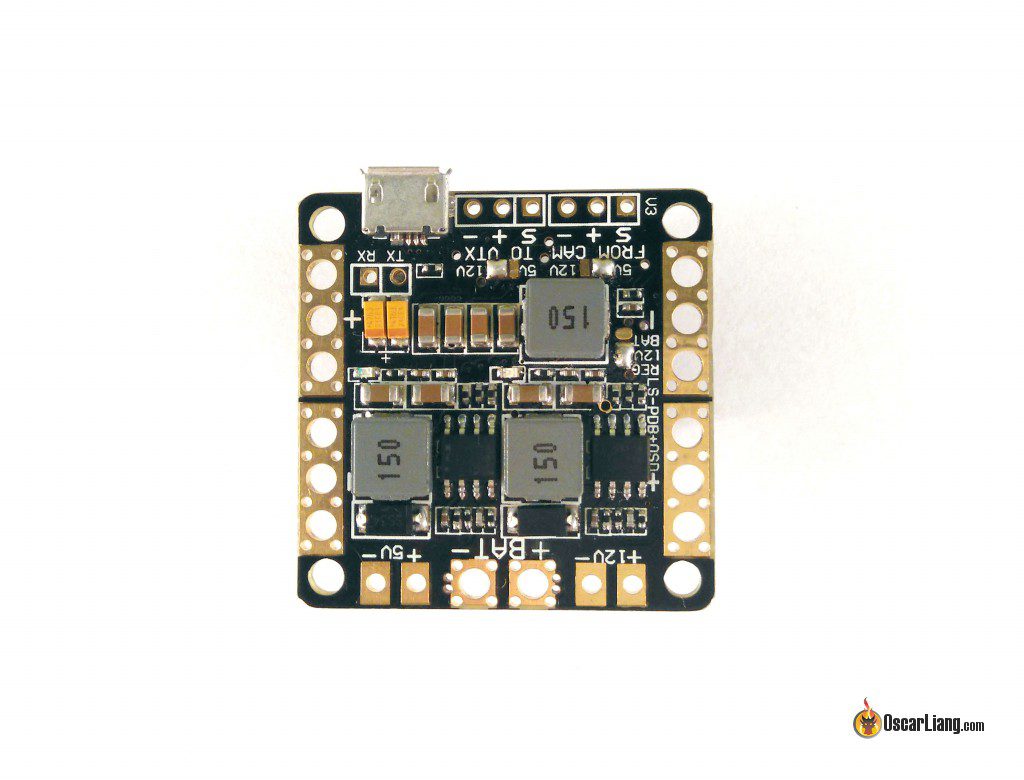 On the front we have a micro USB port and six header pin holes for your FPV camera and VTX. After soldering the header pins there has proven difficulties accessing the USB port, especially when you have the servo leads from VTX plugged in. This can be avoided by direct soldering wires or soldering angled headers from the bottom.

I think one thing this board can improve on, is to move the VTX pin holes to the opposite side of the PDB (rear of the board), because that’s normally where we place our VTX, at the back of our quads.

On the front there are also two sets of soldering pads, where you can select your preferred voltage (5V or 12V). 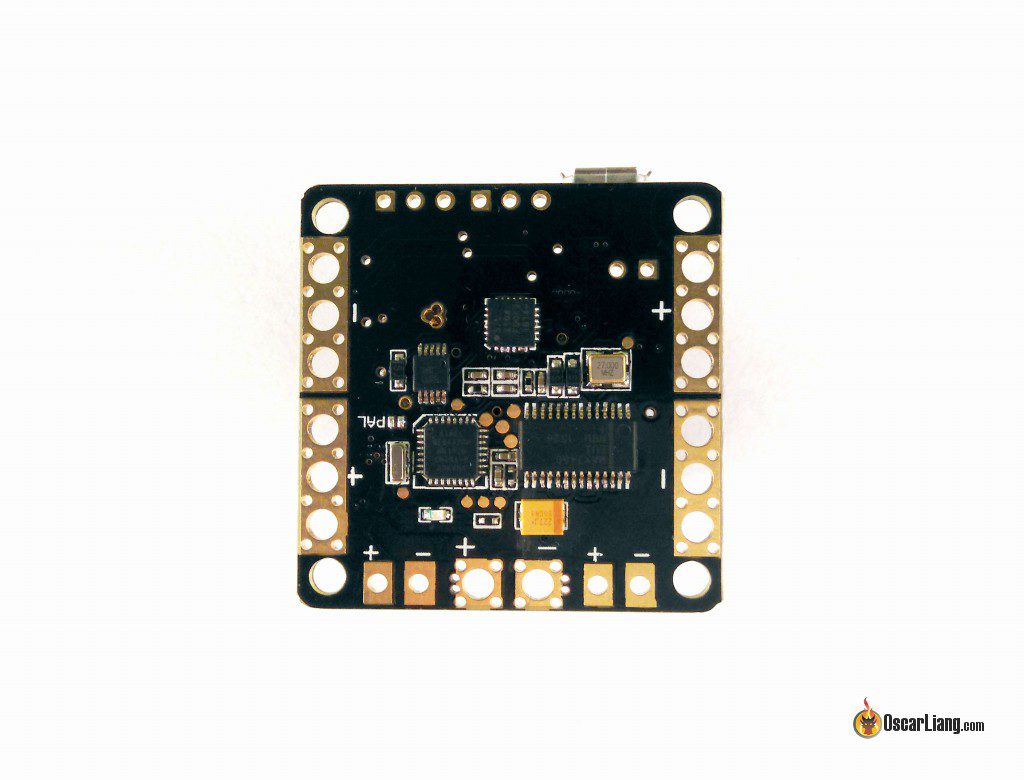 OSD is located on the underside of this PDB. One thing worth noting is there are also two un-bridged pads labelled as PAL, probably NTSC/PAL selectors. I have yet to verify this as it was set to PAL in the OSD firmware. There is also additional tantalum capacitor placed there to reduce noise in power for OSD.

Quality of this product seems good, component soldering is very clean. As for its durability – I can only tell after some more unplanned landings :)

We found the same PDB available from BG under a different brand name.

I tested the PDB with my FPV setup and got it up and running with 4S LiPo. OSD is working without flashing firmware (I only needed to configure it with 1.6 MWOSD GUI earlier) in PAL mode. 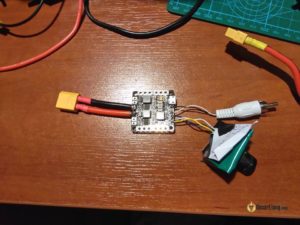 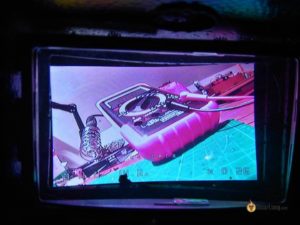 The problem was that the overlay text was flashing rapidly. I checked 5V output of the board again and confirmed that it gives 4.95V which should be enough for MinimOSD to work properly. I also checked voltage on tantalum capacitor mounted on OSD side and measured 4.66V – that is probably the source of this issue as Micro MinimOSDs are known to be very strict in terms of required voltage. Blinking OSD text is very annoying on a slow flying model and certainly will not be usable at all on a fast racer. Also if it has such problems without even having any load on the system, it’s highly probable, that it will fail during aggressive manoeuvre.

After seeing this, I cannot recommend this board, at least not if you are planning to use it with built in OSD.

I’m going to launch a motor and disappear, osd. Sometimes it will appear for a moment.
I stop engine, you see again.

I have the problem, that there are some “lines” on the picture of my FPV-goggle, which are getting stronger, depending on the position of the Throttle stick…it looks like the current isn’t lc-filtered.
But I connected the VTX as well as the camera with the correct output/input on the pdb.
Could you suspect, why this is happening/what the problem is?
I’m very grateful for any suggestion!!
Thx in advance :)

I think it’s just bad power filtering.
You can add a additional filter at the voltage output, or simply replace the PDB..

I have tested three of these and the 12v for vtx only give 11.xx volt. That results in not power my 12v vtx. Had to use the 12 v pad… also very fragile and easy break. Not a fan of them ;)

Unable to work on the OSD betaflight 3.0.0. (No data on OSD)
by against cleanflight on when I turn on the uart port 3 in the menu telemetry MSP it works well. the problem is that the option msp in telemetry on betaflight 3 is not available.

I have so far had 3 of these boards and have found that only 1 of these has been good as the other two have blown an analogue switch chip that sits on the OSD side. Once this goes you cannot get data from the flight controller.

That was my exact experience too, the OSD becomes useless then.

Looks very much like the MXK PDB with some differences. People over at RCgroups have had trouble with the MXK, maybe this is a revised but (as it seems) not very much improved version ;).