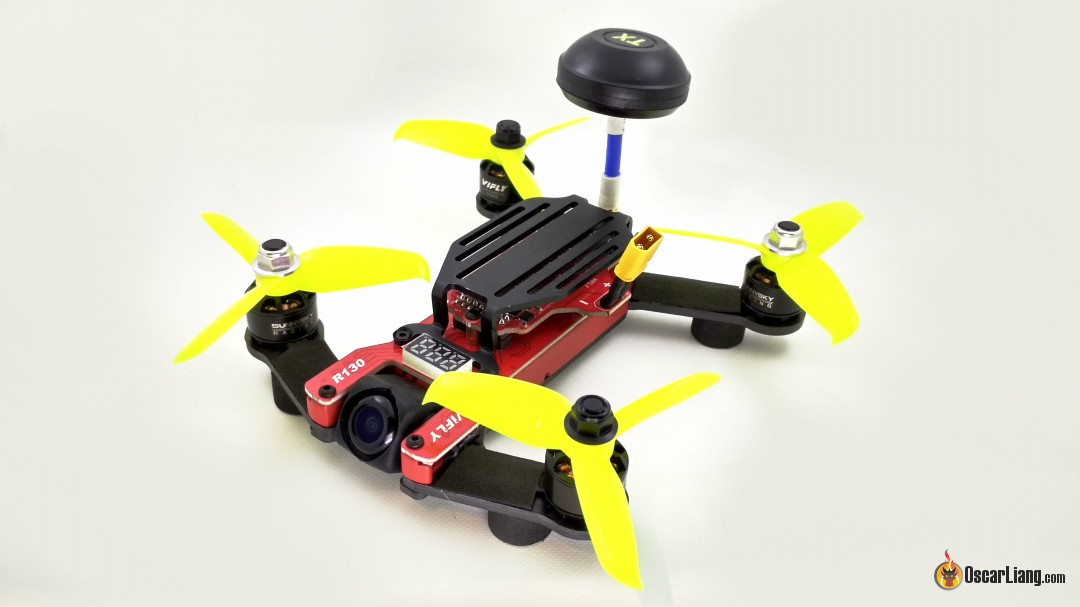 The VIFLY R130 is a beginner-friendly 3″ RTF quadcopter that uses some of the latest components  on the market and is designed with durability in mind.

This review is rewritten by Konrad Stepanajtys, edited by Oscar.

Here is the basic specification of the R130. (The product I reviewed is the second revision which has different motors to the first one)

* You will need to buy the LiPo battery separately.

The R130 I received is a ready-to-fly kit, it comes with a Radiolink T8FB transmitter, the receiver is communicating via SBUS and is bound with the TX out of the box. It’s pre-assembled with props and antenna on out of the box. 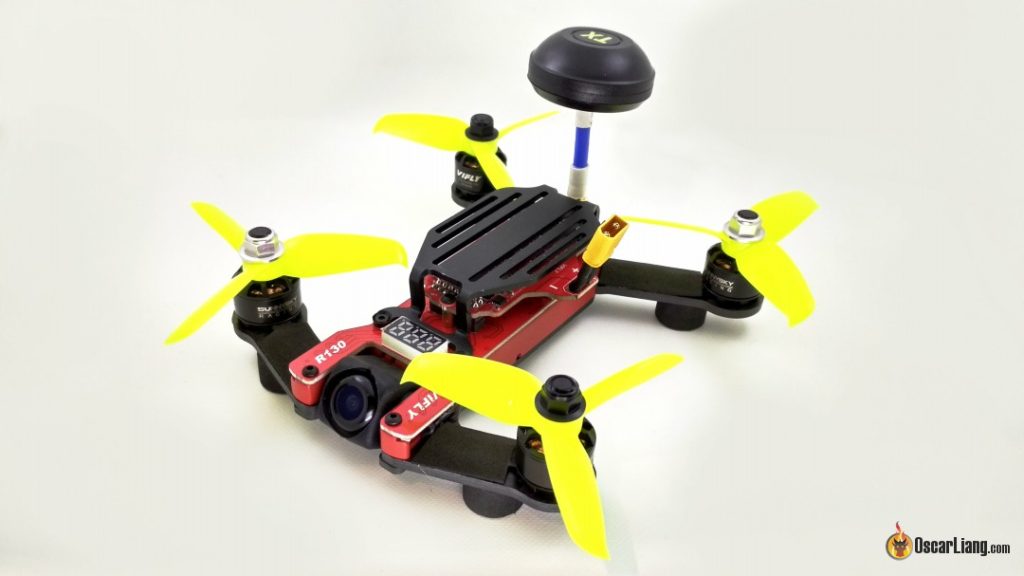 This is indeed a beginner friendly quadcopter, you only need to charge the battery and it’s ready to take off.

The quad can also be bought as a BNF (bind and fly) package with a Frsky, Spectrum or Flysky receiver.

The weight of the quad falls under 250g even with a 3S 800mah or a 4S 650mah LiPo battery – this is important to those interested to fly in compliance with the rules in some countries.

The supplied 16-page manual can be very useful, especially for a beginner, describing how to setup the quad to ready to fly, as well as hazard warnings.

Unboxing – What is in the kit

The parcel that I received was nicely packed and it’s very unlikely the quad can get damaged during transport. 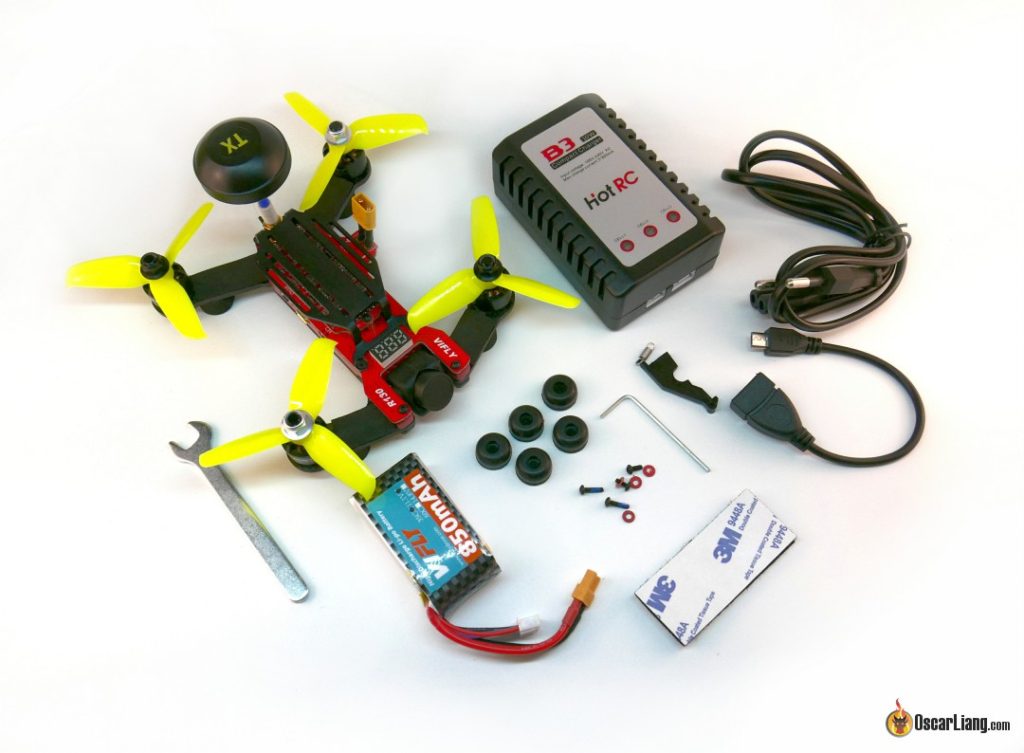 The VIFLY130 is a compact, sandwiched build – lower deck is decent quality carbon, arms are 3mm and middle plate is 2mm.

A thick PCB board acts as the top plate and directs power to all the electronics (excluding ESC’s). All components are hidden inside a plastic skirt. 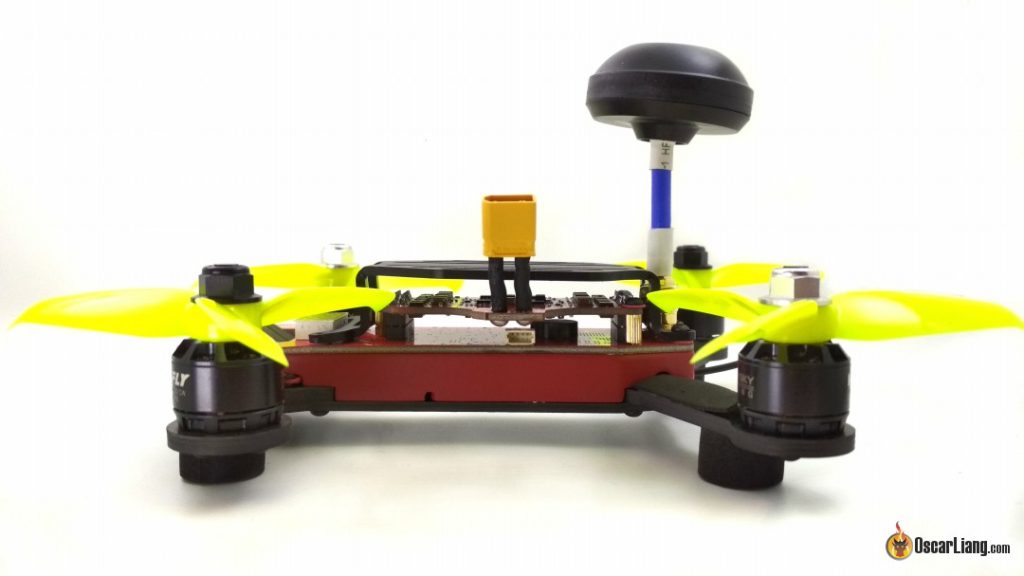 On the top of the PCB you will find a 3-digit LED display which shows battery voltage, your chosen FPV band, channel and output power. I must say that it is a pretty convenient feature. 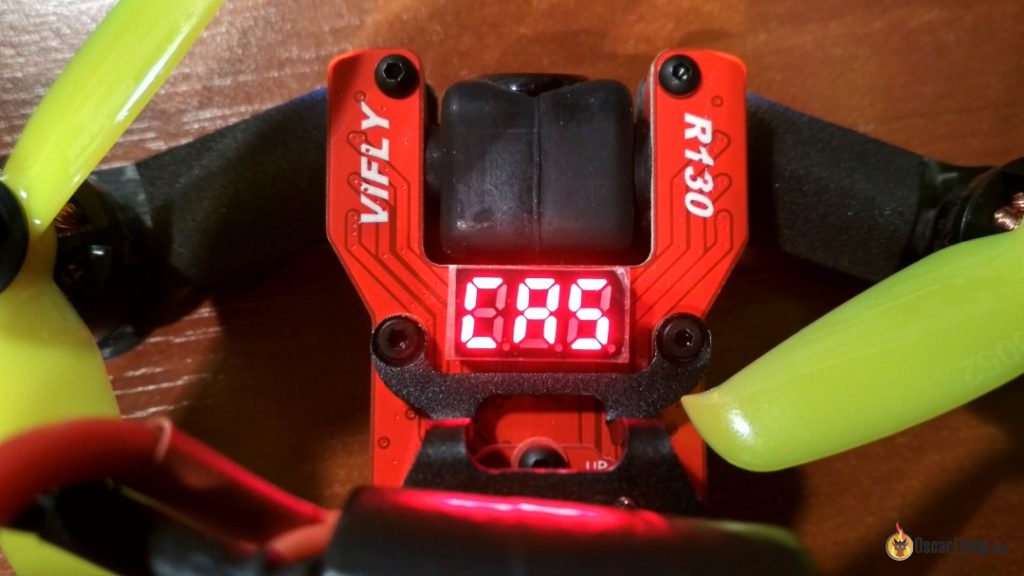 However the voltage shown on the LED display is about 0.3V higher than the actual battery voltage tested with a multimeter.

Apart from a USB port, two buttons are located on the right side of the quad. One is the bind button for binding your RX to the TX (only useful if you are getting the BNF kit). The second button is used to toggle between FPV band and frequency settings.

On the front of the craft we can find two white LED lights. 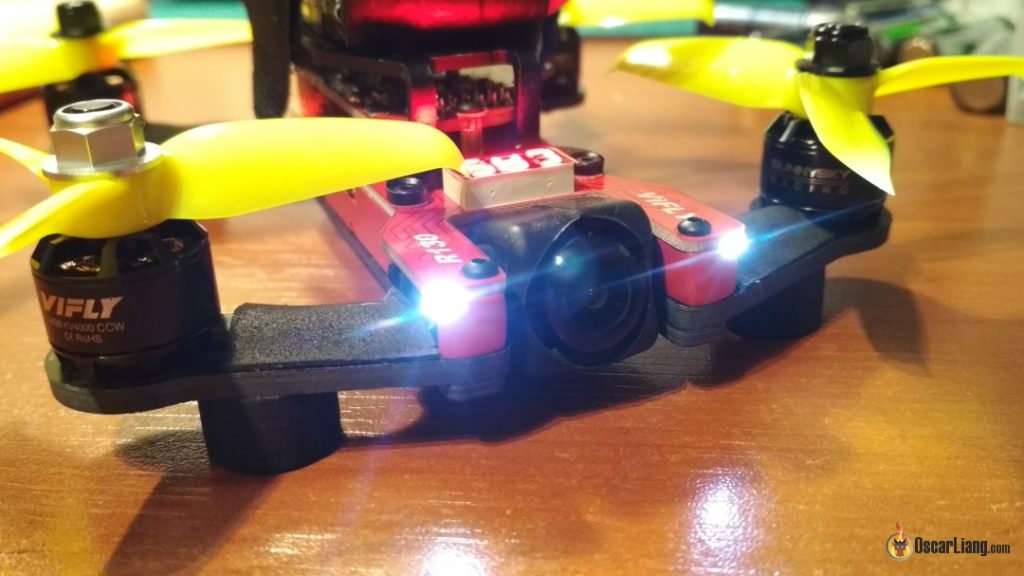 The red LED light is the power indicator and the blue one is the status, which is also visible from the back.

As a first impression, the quad feels very solid overall. During my flight testing I had a few pretty bad crashes, such as hitting wooden and steel poles directly with full speed, and the quad is still holding up with only some scratches but no serious damage. It’s definitely durable!

The video transmitter has switchable power level between 25mW, 200mW and 500mW.

25mW gave me good image while flying in my backyard, as expected it should work well in confined spaces. 200mW should be enough for most people flying within 1Km of range in open fields. I didn’t notice any excess heat building up while flying 200mW. The 500mW might be a bit of an overkill for a quad of this size, but for someone who enjoy this hobby alone, the highest power settings could be a bit more reliable. (Please check your local regulation to find out the maximum output power you are allowed to use)

The VTX is equipped with an SMA connector which is perfect for me. 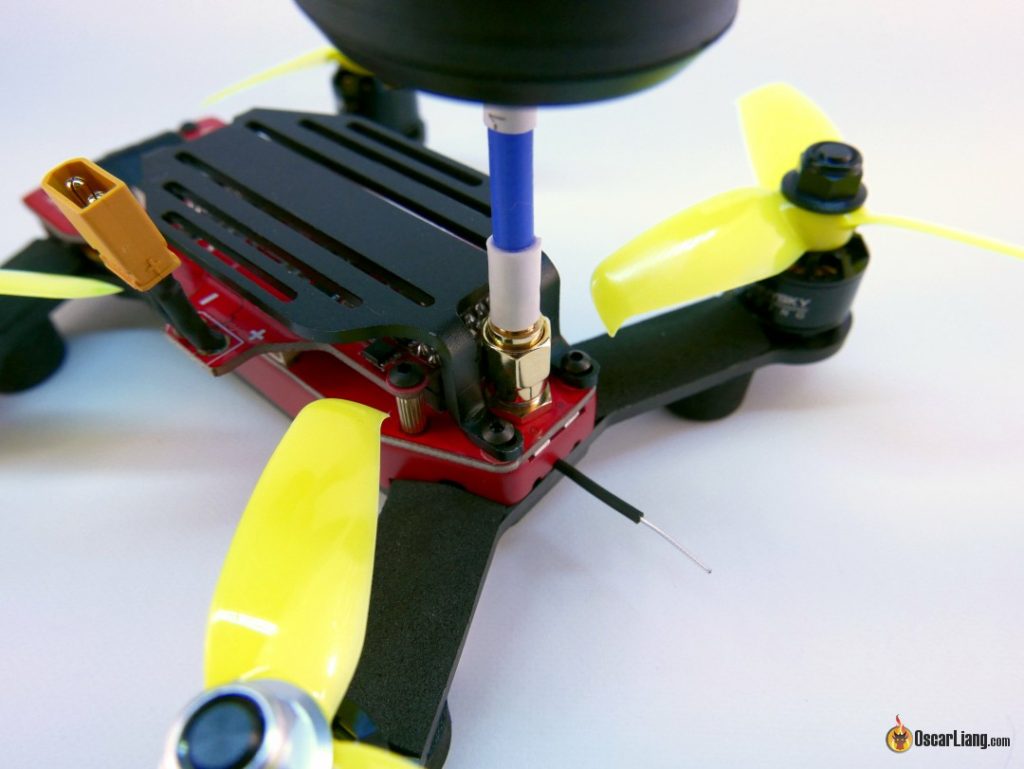 The camera has a CMOS sensor and although being mounted in a rubber casing, it still suffers from jello with slightly bashed propellers. WDR is not great and It struggles with extreme lightning conditions, for example at the evening or overcast sky. This is a common problem for most nano/micro CMOS cameras I have used.

The Vifly130 is also equipped with Betaflight OSD to show important flight information, as well as allowing users ch to change Betaflight settings.

The motors used on this model are VIFLY 1406 4000kv motors (Sunnysky rebranded) which feels robust and smooth. 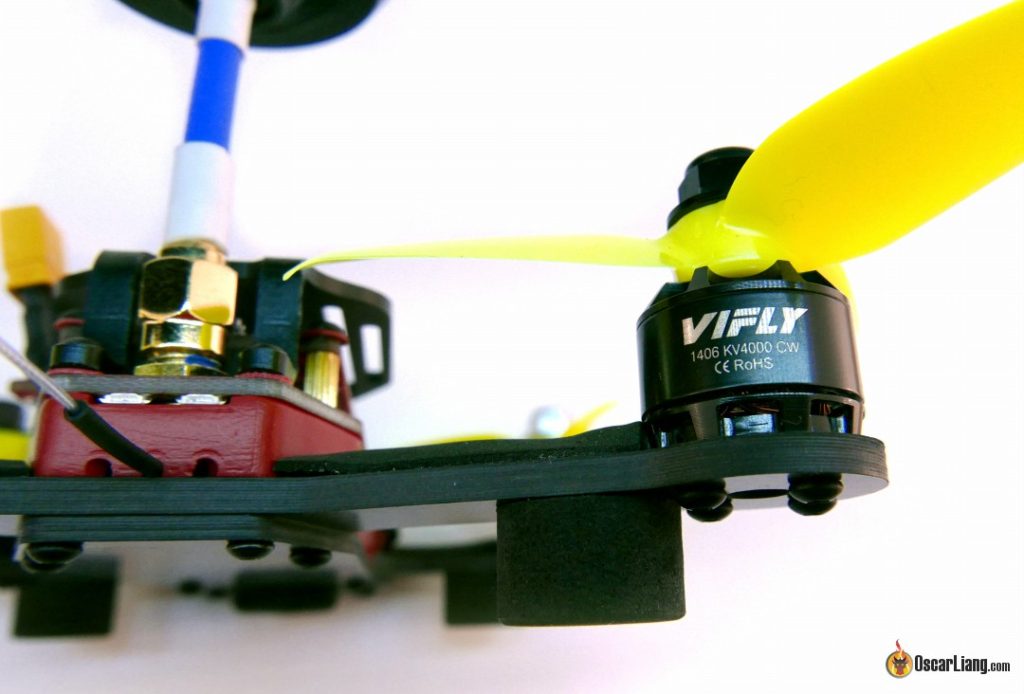 The 4in1 ESC is an interesting part – this is not an “off the shelf” product, but seems to be designed specifically for the Vifly130 quadcopter. 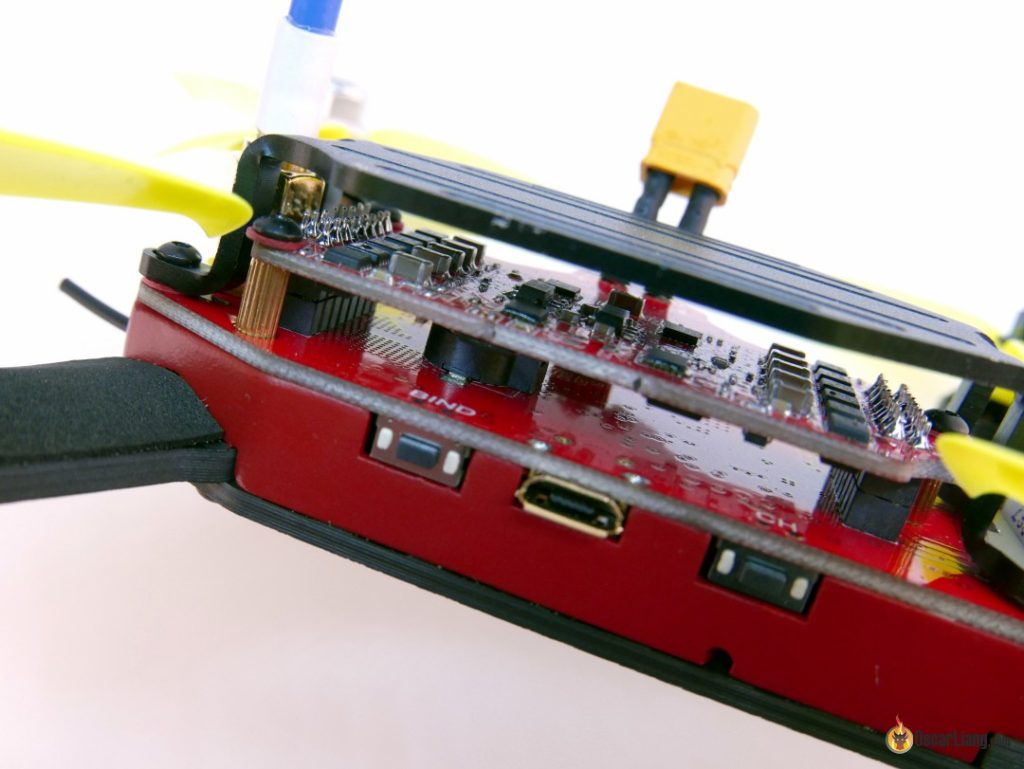 It’s a Dshot600 capable 4-in-1 ESC that is rated for 15A continuous current and due to its size and the way it is mounted, it allows a lot of air to cool it down during flight. Interestingly, it is not directly soldered to the PCB and motors but utilizes a set of pins to connect to the quad. I was wondering if the pins would heat up under heavier load, but I didn’t have any problems so far.

That is big advantage of the Vifly130 for beginners or those who aren’t comfortable with soldering. 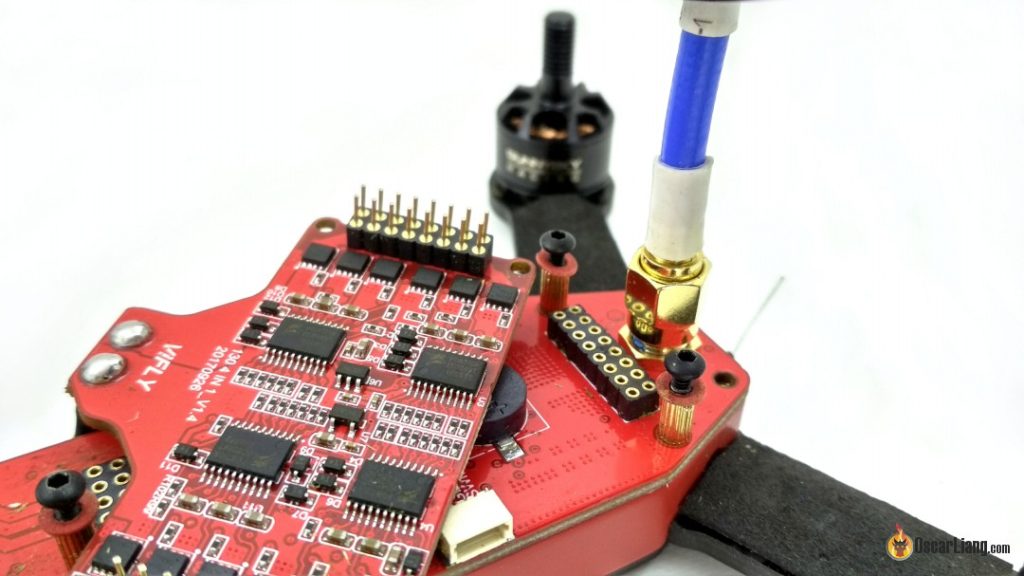 The XT30 connector is not soldered directly onto the PCB, but on a short piece of wire, so it should not put too much strain on the ESC in case the battery ejects.

Apart from the ESC it i not that easy to disassemble this aircraft. The FC is connected to the upper deck with a ribbon cable, which is possible to get damaged during removal/installation if not careful. It’s best not to touch it unless you really have to.

It is not fair for me to say how good or bad the quad flies out of the box, because the unit I received was one of the first prototypes they assembled with new motors and props, and the quad wasn’t tuned properly.

I gave Vifly feedback about this tuning issue, and they confirmed that all production units will be fine tuned out of the box.

Anyway – it wasn’t particularly to tune the Vifly130, after a little bit of tuning, the quad was flying really well.

Check out the video below which was my first time flying in a parking lot ever, please don’t judge my flying skills by this ;) 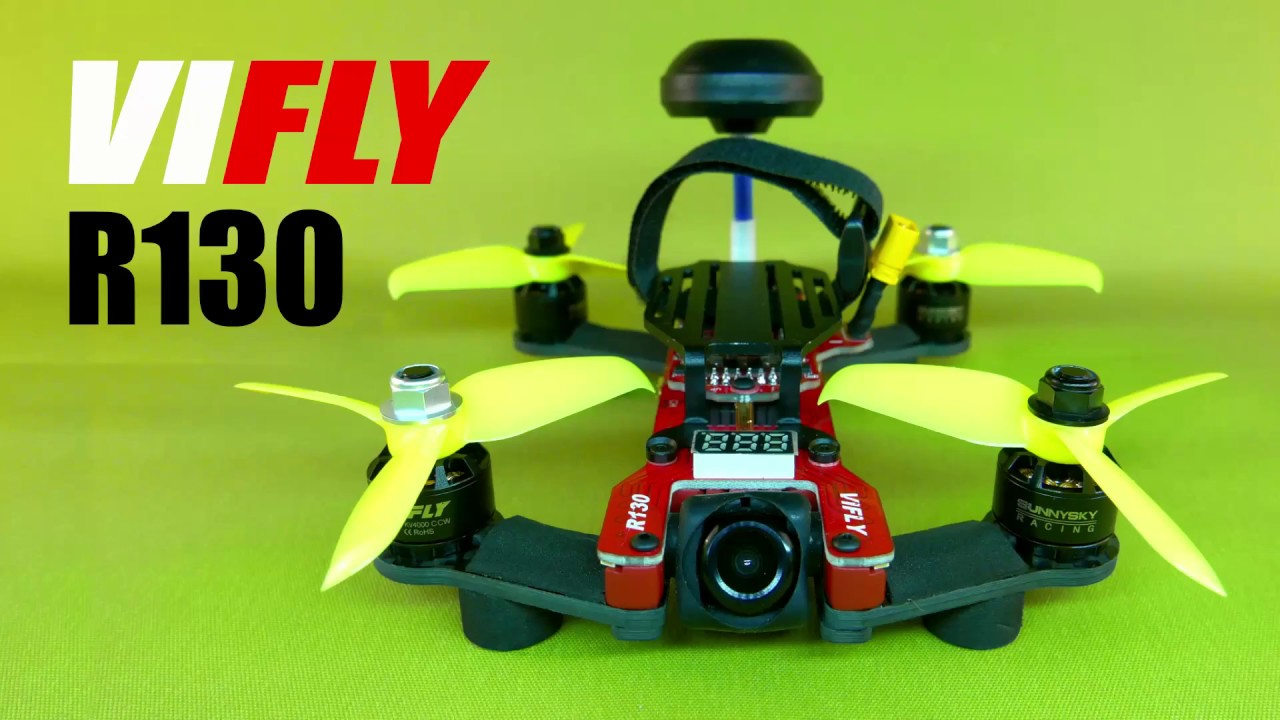 The supplied radio transmitter (TX) is a cheap entry level Radiolink unit, it’s not spectacular but good enough to get the job done. It’s an 8 channel TX and is equipped with a removable 4xAA battery cradle, but it will also work on a 2-4S LiPo battery. Initially the gimbals were too tight (may be just my personal opinion), but you can open the housing and adjust the springs in the gimbal to loose it or tighten it. 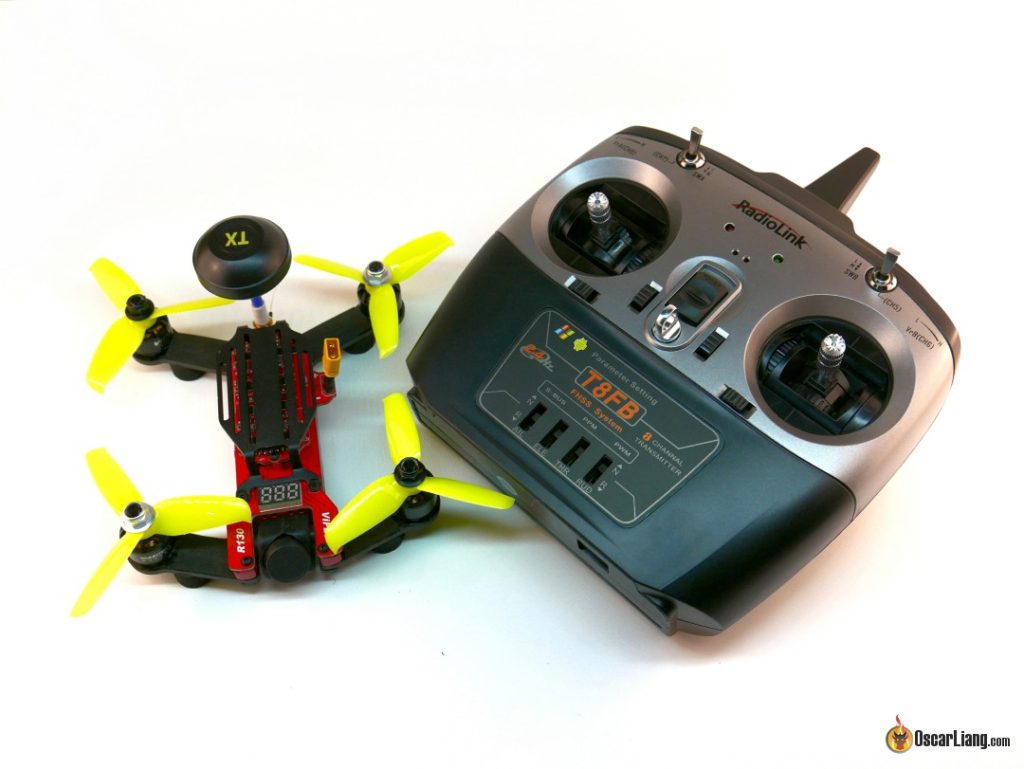 The VIFLY R130 is a decent quadcopter that is suitable for beginners entering FPV.

I also got mine in the UK who gave me really good support with this being my first drone. It’s been fun both flying and fixing it :-)

I have also recently made a few modifications to add a mini HD Camera – flight footage here …. youtube.com/watch?v=as6ct6tHnYM

Very detailed review, VIFLY R130 is a good choice if you want to get into FPV racing.

Great review, for anyone from the UK, I purchased mine from Unmanned Tech as they are the official UK distributor

Now is the time