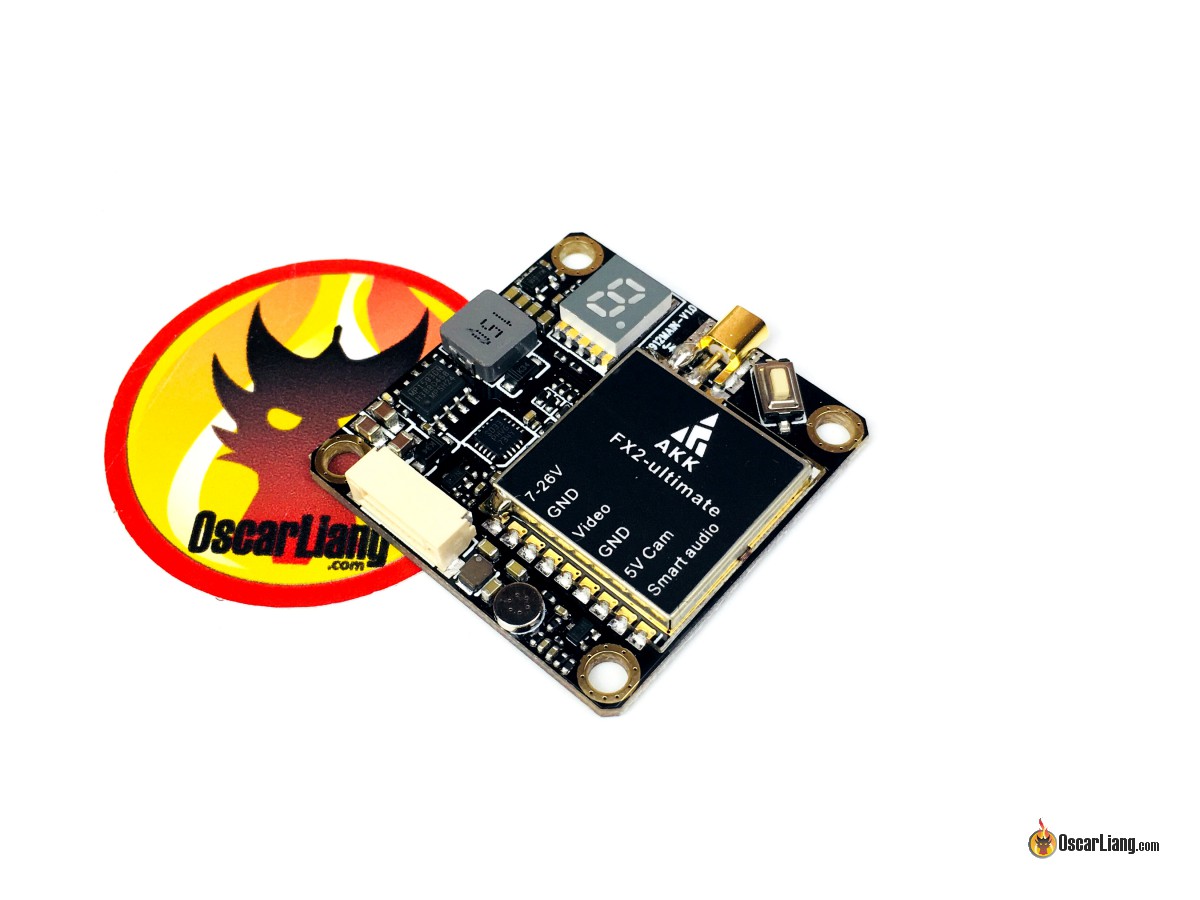 Looking for long range 5.8GHz video transmitter? Check out the AKK FX2 and X2 Ultimate 1200mW VTX! They are also capable of transmitting at 25mW and 200mW, so you can use it for indoor flying as well as racing with others outdoor.

The AKK X2 and FX2 VTX’s have the same spec, apart from the form factor (dimension) and weight.

What’s improved from the old version?

The “Ultimate” is an upgrade to the previous FX2 / X2 VTX. The improvements include:

The AKK FX2 VTX is designed to be mounted in the FC stack (30x30mm mounting holes). It has a MMCX connector, a push button to change VTX channel, band and power, and a single digit display. 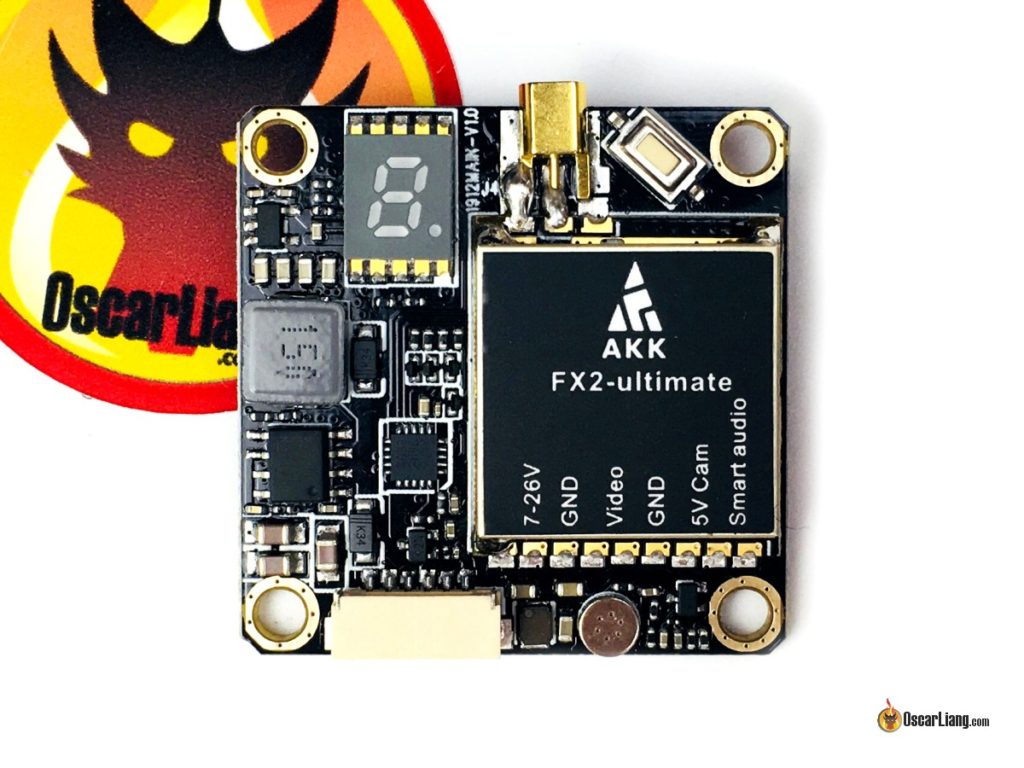 All the components are built on the top of the PCB, there is nothing on the underside. This makes a thinner board and easier to install in the stack. 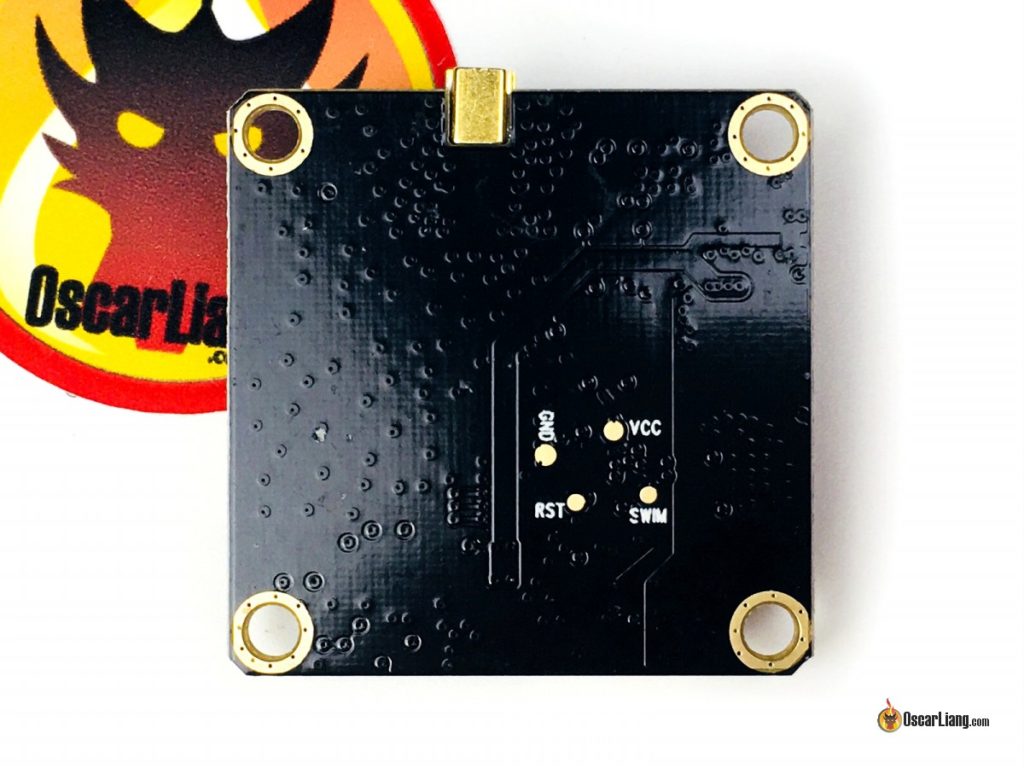 The package comes with a MMCX to SMA pigtail, and a silicone cable for the power and signal. 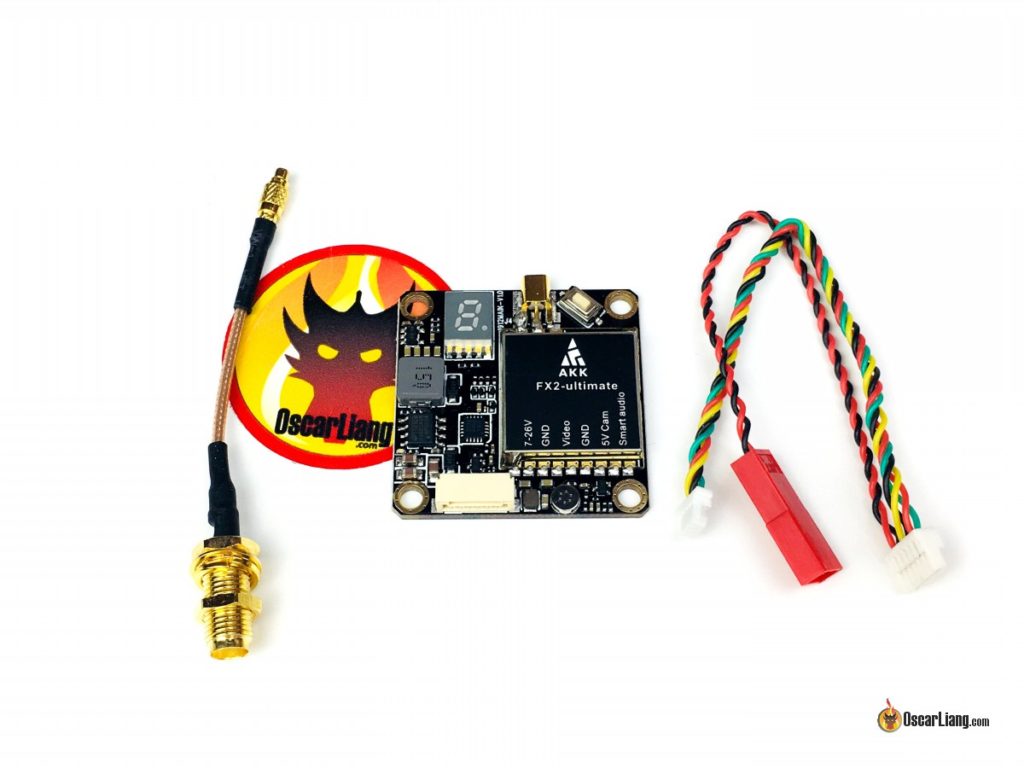 The AKK X2 is in a smaller form factor, so you can install it anywhere in the frame. If you don’t plan to install the VTX in the FC stack (e.g. in an ultralight build there is no room), then you probably want to get the X2 instead of the FX2. It’s a few grams lighter too. 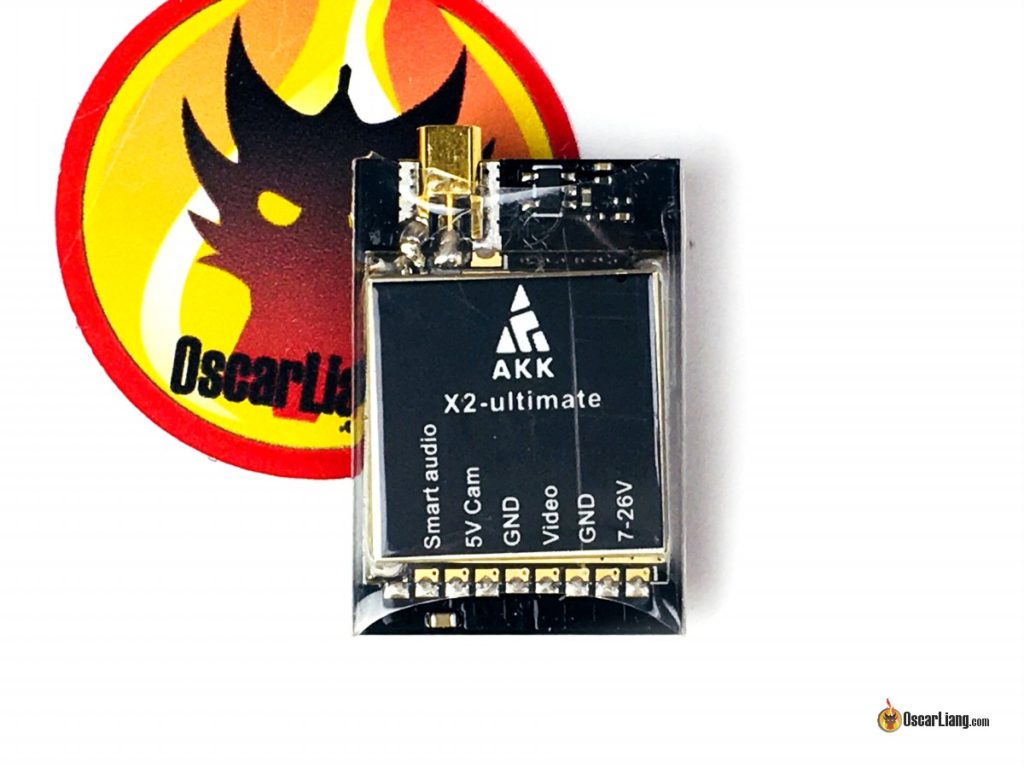 Same as the FX2, the X2 has a MMCX connector, a push button and a single digit LED display. 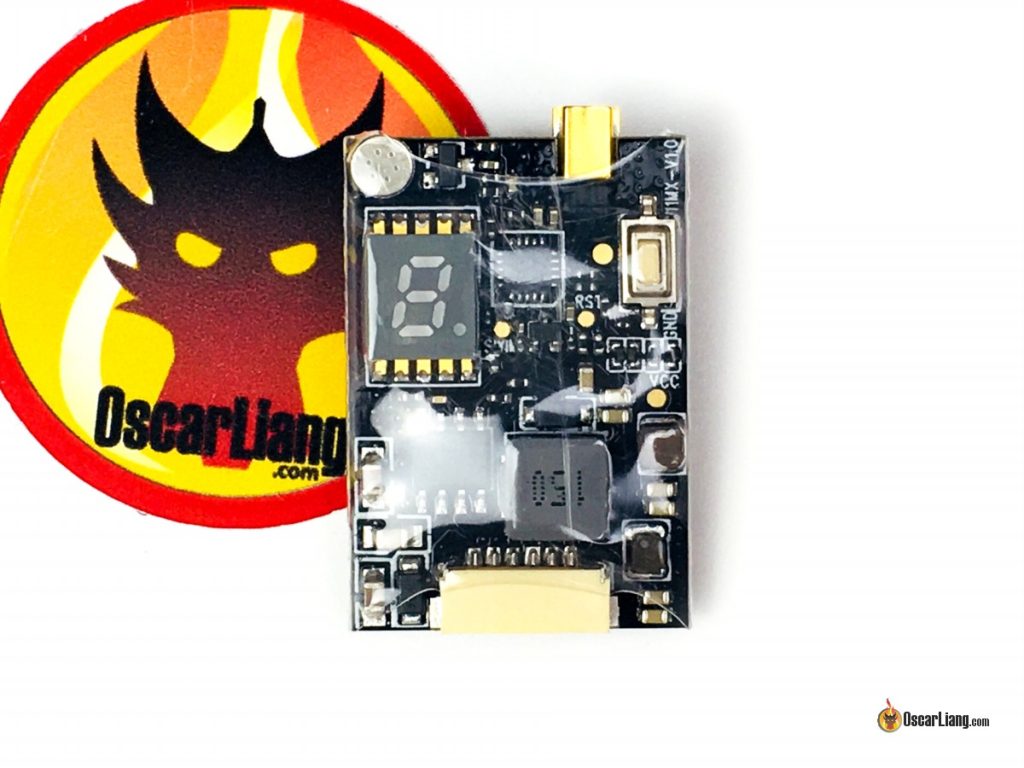 The X2 VTX comes with a MMCX to SMA pigtail, and a silicone cable for the power and signal. 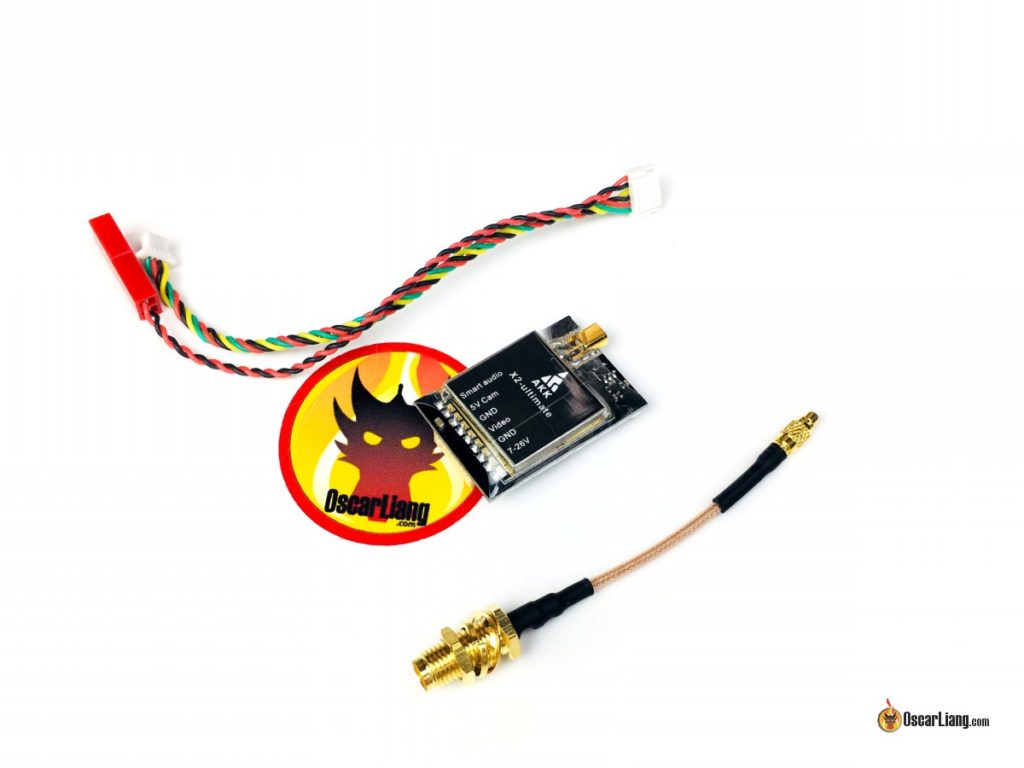 Here is the manual describing the operation of the VTX. 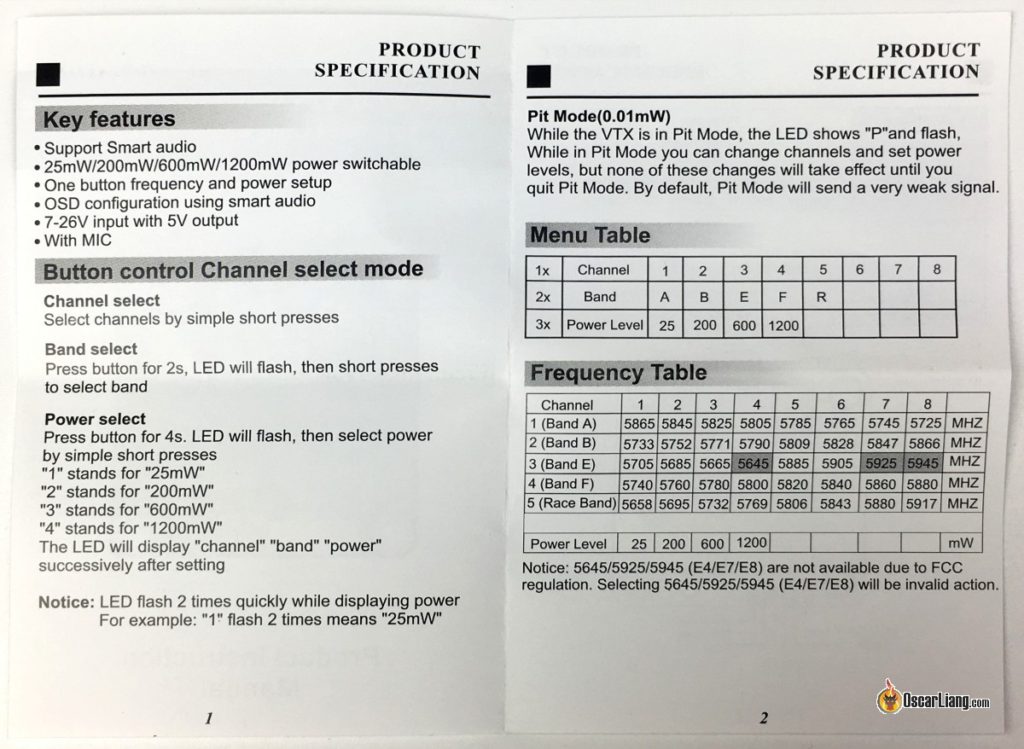 I tested the actual output power of both FX2 and X2 Ultimate VTX using the ImmersionRC power meter V2 on all 8 Raceband channels (see all 5.8GHz bands and channels).

Theoretically, higher power help increase maximum range of your VTX, but there are many other factors that can also affect your range. Not to mention higher VTX power can introduce some potential problems.

To maximize range, VTX power is probably the last thing on my list. You should optimize other parts of your FPV setup first. Using suitable FPV antennas for both transmitter and receiver, and getting a diversity/multiversity video receiver are just as important. 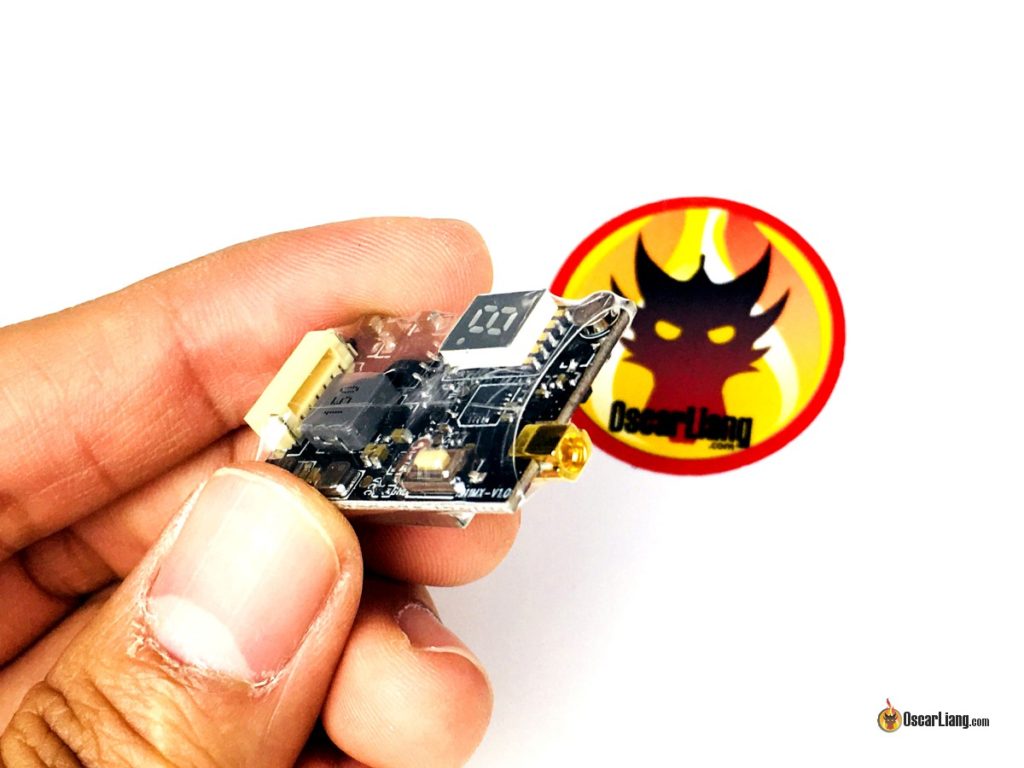 One downside with high transmitting power is multi-path interference, especially when you’re flying in environment such as rocky terrain and cliffs. Your VTX also gets much hotter which can affect the performance of the transmitter without adequate cooling. When I was testing the VTX on the bench, I noticed the power drops considerably over time if there is no cooling, and it gets really, really hot, so that’s something you should beware of.

Most importantly, you should follow your local regulation regarding the maximum power you are allowed to transmit. Be responsible and don’t break the law.

I haven’t tested audio in a quad yet, but I briefly tested it on the bench and it sounded quite noisy. The static noise is really loud to the point I can barely hear myself when talking to the mic.

But hey, at least the mic is working this time! It wasn’t working with the older FX2 and X2 when we tested it last time.

Here is the VTXTable for setting up SmartAudio.

Sending a Balloon and Camera to Space

Can anyone tell me the value of the resistor that is located right next to the mounting hole / in the corner with the microphone /. While I was installing the transmitter and I tore off the element. Thanks in advance!

I made a boo boo and need your help. I somehow disconnected the wires going to the JST and required the quickly, however incorrectly. I routed the 7-26 power line to the 5V cam port of the VTX and summoned the magic smoke :’(. This VTX is toast and won’t turn on at the moment. Is there. Way I can potentially fix it? I assume a regulator/BEC to be fried however I’m not sure how to test this stuff. Really appreciate all of your contributions to the hobby and hope to hear your response.

Hi
Can anyone solve the noise in the image? X2-Ultimate
Thanks

I have the AKK FX3 Ultimate and the sound that’s recorded on the DVR is almost unable to be heard. Is there any way to get it turned up ? I can only slightly hear the sound on my lap top if I turn the sound all the way up.

Any issues that might hamper long range? These seem like a good option, but I’ve heard problems with noise handling and the price is a little too good…

Oscar, im getting video noise on throttle, but only on throttle. Im powering direct from the + battery terminal, because it says it needs 7-26v input.. Old vtx was clean but ran off of 5v from the FC and went through an LC filter.

Can I run the akk ult v2 off of 5v? Or do i need to build in a voltage regulator to clean this up?
Any info would be greatly appreciated.. thanks

take a look at this guide it might help and saves me repeating :)
How to connect camera and VTX for good video

Is it possible to direct solder the fx2 ultimate? I’d prefer note to use the connector.

I bought one of these, but it might be an older version as it’s only 800mw. The video signal is incredibly noisy. I’m having to build a filter for the power supply on this thing. I think my combo of omnibus f4 which has an integrated PDB that’s apparently not adequately filtered for the VTX power supply and the AKK FX2 which apparently doesn’t have filtered input power makes this pretty worthless as a VTX. I have had way better luck with $8 dollar boscam 600mw units with the dip switches (despite having different dip-switch patterns between each model I buy somehow).

The smart audio feature is nice and worked great and easily for me but as soon as I take off the static in the video feed is so terrible I’m about to chuck this thing in the trash.

The vtx harness has too many grounds use a tramp vtx harness and re-pin the the rest of the wires correctly. Good luck

Would you happen to know the order of the pins for an AKK fx2-ultimate. I would like to direct solder but the labels do not match the pins

on my measurements with the irc pm v2 I used F4 (5800) since I can set the PM to exactly that – but there the power output is quite low. On E3 (5665) they believe it’s the highest possible RF power – and indeed I got around 1.4watts shortly – dropping lower with heat quickly as you say.
have you tested the Foxeer clearTX also? would be interested in your findings…

Remember too that all of that heat is just wasted battery capacity ;)

To exit out more hold button as you plug in LIPO perhaps.

it was capable of putting out 1300mw but it drops to 1000mw seconds after due to the heat it generates so in reality it can’t get that powerful IMO.

Can’t get smart audio to work on two fx2s. Read somewhere it’s because BF fixed a bug on the firmware for non licensed smart audio products. Yours working fine?

Hi Pol!
Do you have an older version of the FX2 (not the same as the FX2 ultimate)? The smart audio implementation of the first version is not compatible with BF 3.3. The newer ones are said to work fine.

Some additional questions:
1. Is the microphone working?
2. How thick are these VTx? (Was thinking about one of them for my Chameleon TI)
3. How high is the output power in PIT mode?
4. Is it possible to power up in PIT mode by pressing a button etc.? I was told PIT mode can only be activated via the OSD, what would make it quite useless in the field.

I have both of these VTXs. The mic works fine. Very clear audio of prop noise in my DVR footage. I am not sure of the thickness but I am using one of each in Armattan Roosters. The FX2 will fit fine as long as you aren’t using a 4 in 1 ESC. The X2 is a tight fit behind the FC.