I recently travelled abroad with my FPV drone and gear (first time in 3 years!), and I thought it’d be a good idea to share what I brought and my latest experience. The setup does not only include the drone, radio and FPV goggles, but also a basic kit for charging and field repairing.

Everything is stored in this small 330x235x120mm case. This is actually a fabric carry case for the TX16S from Radiomaster, but I manage to fit a whole FPV drone setup in there. You can get this carry case here: https://oscarliang.com/product-ap95

The internal lining is soft and padded. It comes with a few velcro dividers to organize your stuff. I simply divide the case into two main sections, one for the DJI FPV Goggles and the other for the radio and the drone, charger etc. For the batteries I just put them wherever there’s space. All the cables, spare props and tools are stored in the zipper poach on the half of the case.

Here’s everything in the case. This setup allows me to fly, charge batteries and perform basic field repairing. The whole setup including the case weigh  in at around 2.5Kg.

You might wonder, what kind of video quality can you produce with such a simple and compact setup? Here’re some of the videos I made during the trip. 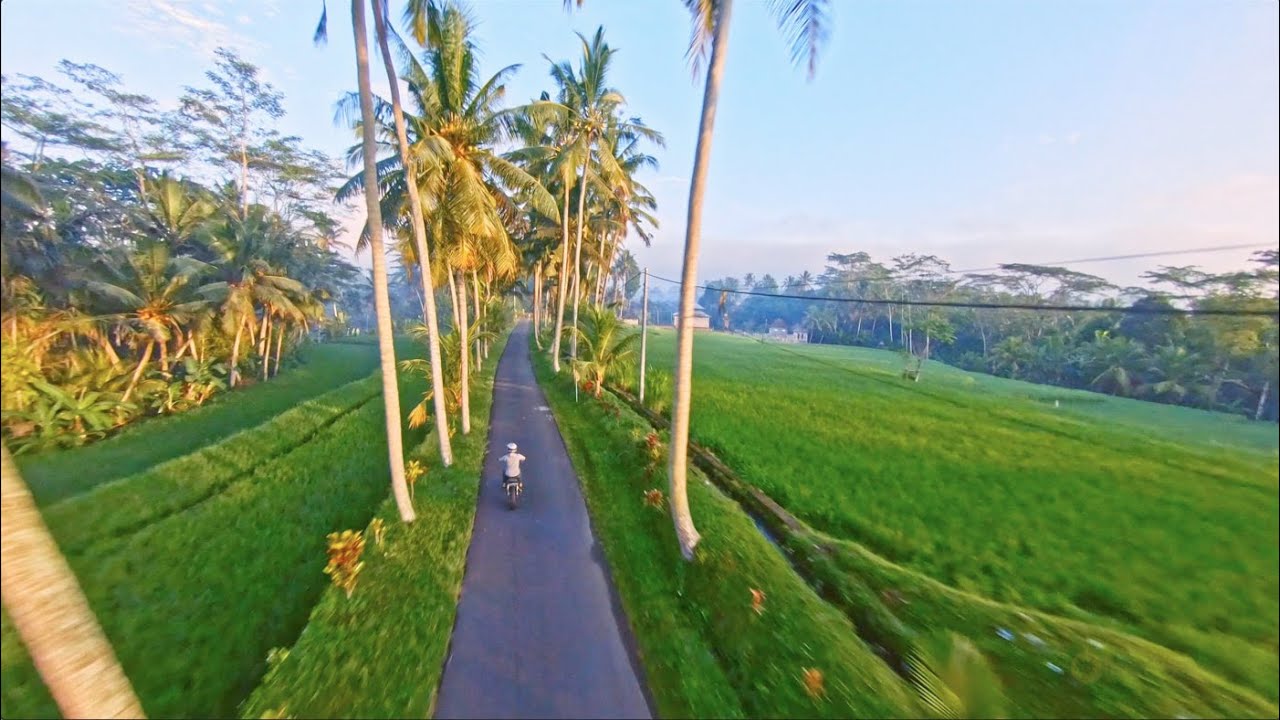 I wanted something light weight, but still capable of carrying a GoPro and has decent range (at least a couple of kilometers), with GPS rescue mode in case I lose signal. The Flywoo Explorer 4″ ticks all the boxes.

Here are some tips on how to travel with LiPo batteries and drones on a plane.

The main downside of the Explorer is the lack of power compared to a 5″. When it’s windy, it’s not as stable as a 5″, and it might struggle to pick up speed and can’t fly very far in headwind. But because it’s smaller and quieter than a 5″, it’s definitely not as scary and doesn’t get as much attention. Kind of nice actually when you have to fly in a busy area. If you are travelling to a windy country, you would be better off with a larger, more powerful quad.

I am using the Naked GoPro Hero 6, it’s an old camera, but it’s known to work well with Reelsteady. It’s also the cheapest Naked GoPro you could get (under $200 from a couple of years ago). But it’s getting increasingly harder to find spare parts for the Hero 6 as they are no longer being produced, so you might have to look at the newer Naked GoPros:

It’s also important to bring several SD cards with you, so you can swap them out after every pack just in case you lose the quad, you still have some footage left. Get some SD card for GoPro here.

I cannot stress enough how important GPS Rescue mode is! It actually saved me a couple of times – one time I lost radio link at 50 meters altitude as I was behind a statue, another time I lost orientation when flying over a jungle, the home arrow guided me home. I simply would not take off if I don’t get a GPS lock when flying in a new spot :)

I also swapped out the receiver to a ExpressLRS diversity receiver – the BetaFPV SuperD to be more specific.

I am bringing the DJI FPV Goggles with me because I have the Vista video transmitter in the quad. This is the biggest piece of equipment in the whole setup, and I cannot wait to get my DJI Goggles 2 (which is now compatible with the new O3 Air Unit as well as the older Vista!). But DJI’s video link is one of the most solid, I think it’s worth the effort.

I bring all four original omni-directional antennas with me as well as a TRUERC X-Air patch, so I have two potential antenna setups, one for short range (all omni for flying all over the place around myself) and the other for longer range (two omni + patch for flying in one direction, I went out 2km no issue at all).

The battery for the Goggles is a self-made 4-cell 18650 Li-ion pack. It has more than enough capacity to get through all four batteries for the quad. In fact I can re-charge maybe 2-3 more packs in the field from this 18650 pack, giving me a total of 6 to 7 packs. If each pack gives me 8 mins, that’s almost an hour of flight time :)

I also 3D printed the screen protector for the DJI FPV goggles, with antenna and SD card holders, it works like a charm.

I picked the Jumper T-Lite V2 (review) for travelling because:

I am very used to the premium AG01 gimbals in my TX16S and Zorro, so flying with the smaller and cheaper gimbals in the T-Lite definitely makes my flying less precise, but with enough practice you can get used to it. And Reelsteady is almost like black magic, it removes almost any vibrations in the video caused by shaky fingers.

I am using an aftermarket antenna (see antenna upgrade options here), it has slightly higher gain than the stock antenna and definitely works better.

Although the ELRS version of the T-Lite V2 radio can only output up to 100mW power, I can still get several kilometers of range from it. I’d strongly recommend setting your packet rates lower (e.g. 50Hz) which offers higher receiver sensitivity and longer range than higher packet rates.

I also upgraded the stick ends to the Radiomaster 360.

Since I have a 4S quad and the goggles battery is also 4S, the ToolkitRC M4 Pocket LiPo charger seems like a perfect choice! You can power it via the XT60 port (e.g. from an external battery for field charging), or via the USB-C port from a PD capable power adapter when charging in the hotel.

But if you have a 6S setup, the M4 Pocket charger won’t work as it only supports up to 4S. I wish they make a 6S version in the future which would be more versatile. If you want a light weight 6S capable charger, the iSDT 608AC would be a good choice, it has a PSU so you can power it directly from AC, the PSU is removable and you can power the charger from DC too .

You could also bring a balance charging board with you to charge multiple batteries at once, but to save space and weight I didn’t.

I took a 30W PD power adapter with me on this trip, but honestly I wish I had something more powerful. I think going forward I would use something like the Anker 65W: https://amzn.to/3VE3yro (affiliate link).

Literally 20 mins into my first flight in another country, something went wrong with my quad and I had to take it apart and do some soldering! So glad I brought some tools with me or I would have been grounded the whole trip.

What do we have here?

I will do another edition for 6S 5″ setup in the future, it probably won’t be as compact as this 4S 4″ setup, but it will be more versatile for sure.

Travelling with FPV Drone and LiPo Batteries on Plane

If your pocket charger is powered off USB C, I would suggest the Anker 733 GaNPrime Powercore Power Bank. It plugs into the wall like a regular charger and gives 65w but also gives 30w off the battery. I’ve used it to power my soldering iron. I’ve even charged my laptop with it.

I linked to a similar charger in the post.

I had followed the link and it only pulled up wall chargers. The Anker 733 power bank is an actual power bank so you can power your lipo charger without even needing to plug it into the wall.

No i don’t mean the power bank, the Anker I linked to is just a charger. I don’t use any power bank, I simply charge in the field with the 4S 3400mAh Li-ion pack, power bank is too heavy to carry around.